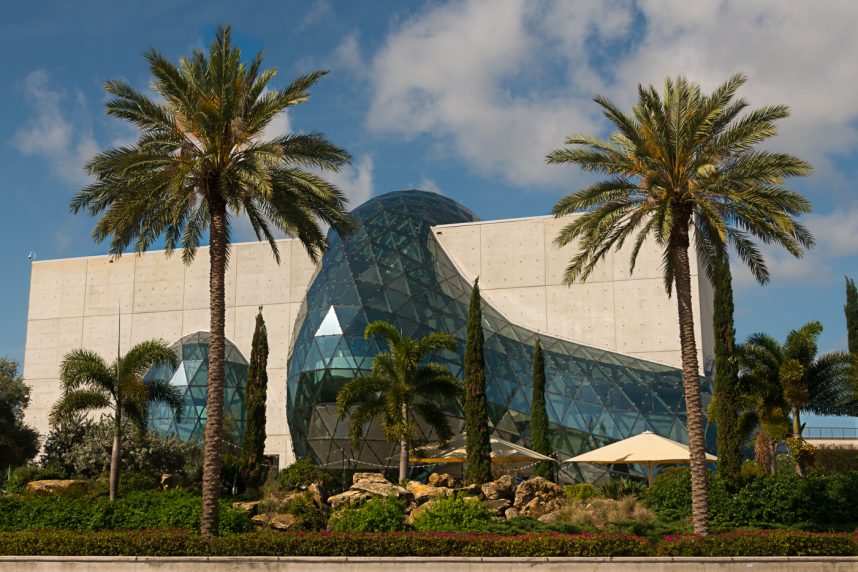 A few months ago, it came to my attention that there was going to be a special exhibit at the Dali Museum in St. Petersburg, Florida celebrating the life and work of Frida Kahlo.  Although I was familiar with some of her paintings, I did not know very much about her.  Since Jim and I were going to be in Florida during the exhibition dates (December 17, 2016 through April 17, 2017) we decided to visit the museum before we left Florida.   This month, we were finally able to visit the exhibition.

Salvador Dali was a gifted artist and skilled draftsman during the 20th century.  He worked in a variety of mediums which included painting, film, sculpture, photography and he also collaborated with other artists. He was imaginative, known to be complex and his behaviour sometimes grabbed more attention than his work.

Dali’s most recognizable work is the painting completed in 1931 entitled “The Persistence of Memory”.  Do you remember the painting with the melting pocket watch?

There are several Dali museums in the world; however, The Dali Museum in St. Petersburg, Florida houses the largest collection of his works outside Europe.

The museum in Dali’s hometown of Figures, in Catalonia, Spain, “displays the single largest and most diverse collection of works by Salvador Dalí, the core of which was from the artist’s personal collection”.  Dali is buried in a crypt below the stage.

The museum in St. Petersburg, Florida came about as a result of Albert Reynolds Morse and Eleanor Reese Morses large collection of Salvador Dali works.  They bought their first Dali painting as a wedding gift to each other in 1943.  The Morses were impressed with his work, his subject matter and Dali’s skill as a draftsman.  As they continued to purchase Salvador Dali’s works, Reynolds and Eleanor Morse became long-time friends with Dali and his wife, Gala.

Below, is a photo of Salvador Dali with Reynolds and Eleanor Morse in 1943.  You will see this image when you first enter the museum. 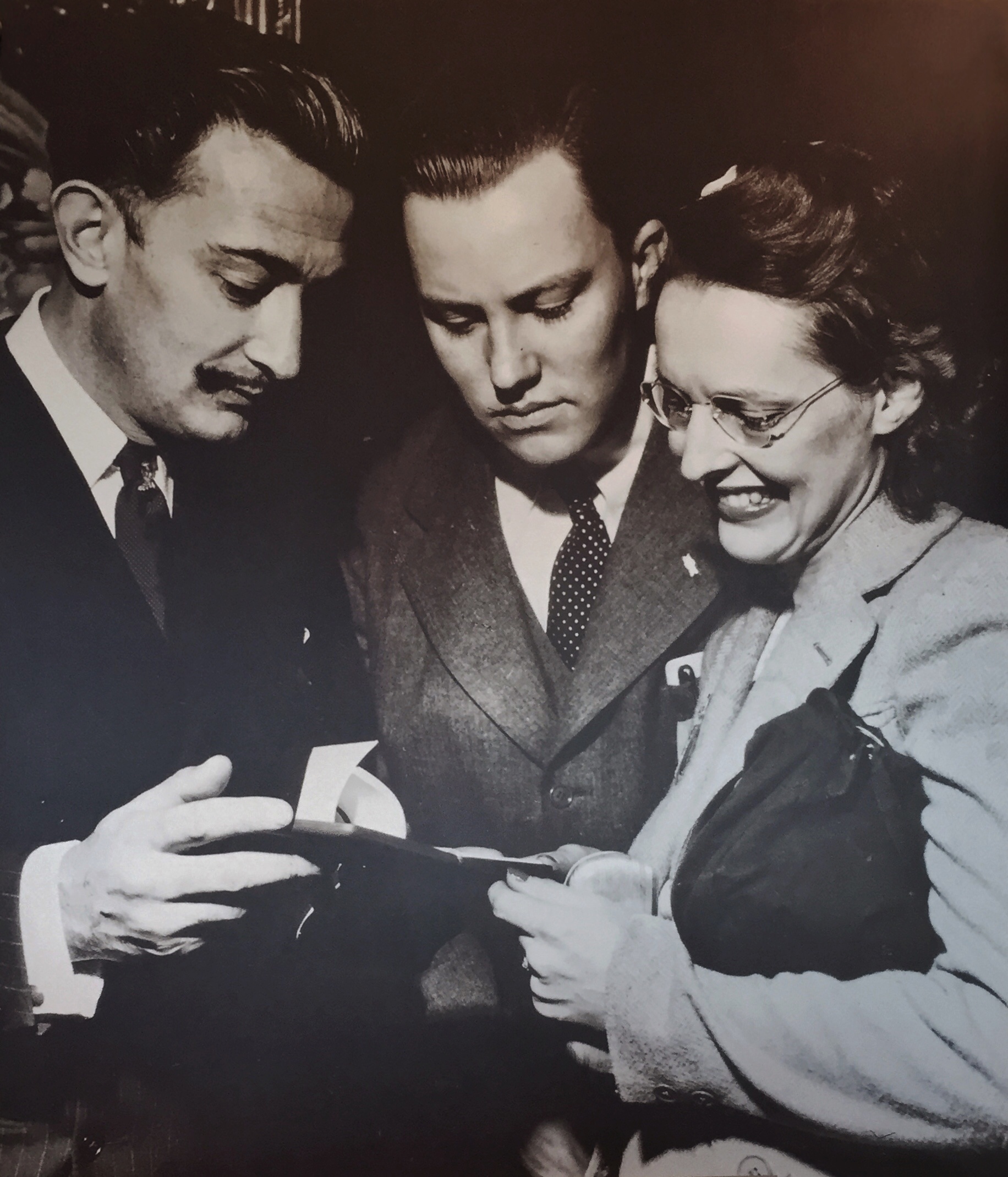 Until 1971, the Morses displayed their collection in their home in Cleveland, Ohio.  Eventually, after years of collecting, they needed a permanent home for their growing collection.  So, Reynolds and Eleanor opened a museum adjacent to their office building in Beachwood, Ohio.  As time went by, this space was no longer suitable and they decided to find a new location.  After a long search, they found a marine warehouse in downtown St. Petersburg, Florida and this museum opened on March 07, 1982.

In mid-2008, an announcement was made that there would be a new museum built on the waterfront next to the Mahaffey Theatre and on January 11, 2011 the new Dali museum was officially opened.

This new structure features a large glass entrance and skylight which is made of 1.5 inch thick glass and the walls are composed of 18-inch thick concrete, designed to protect the collection from a Category 5 hurricane.  In comparison to the previous Dali museum, this building is twice the size.

Here are a few images I took from our recent trip to the museum. 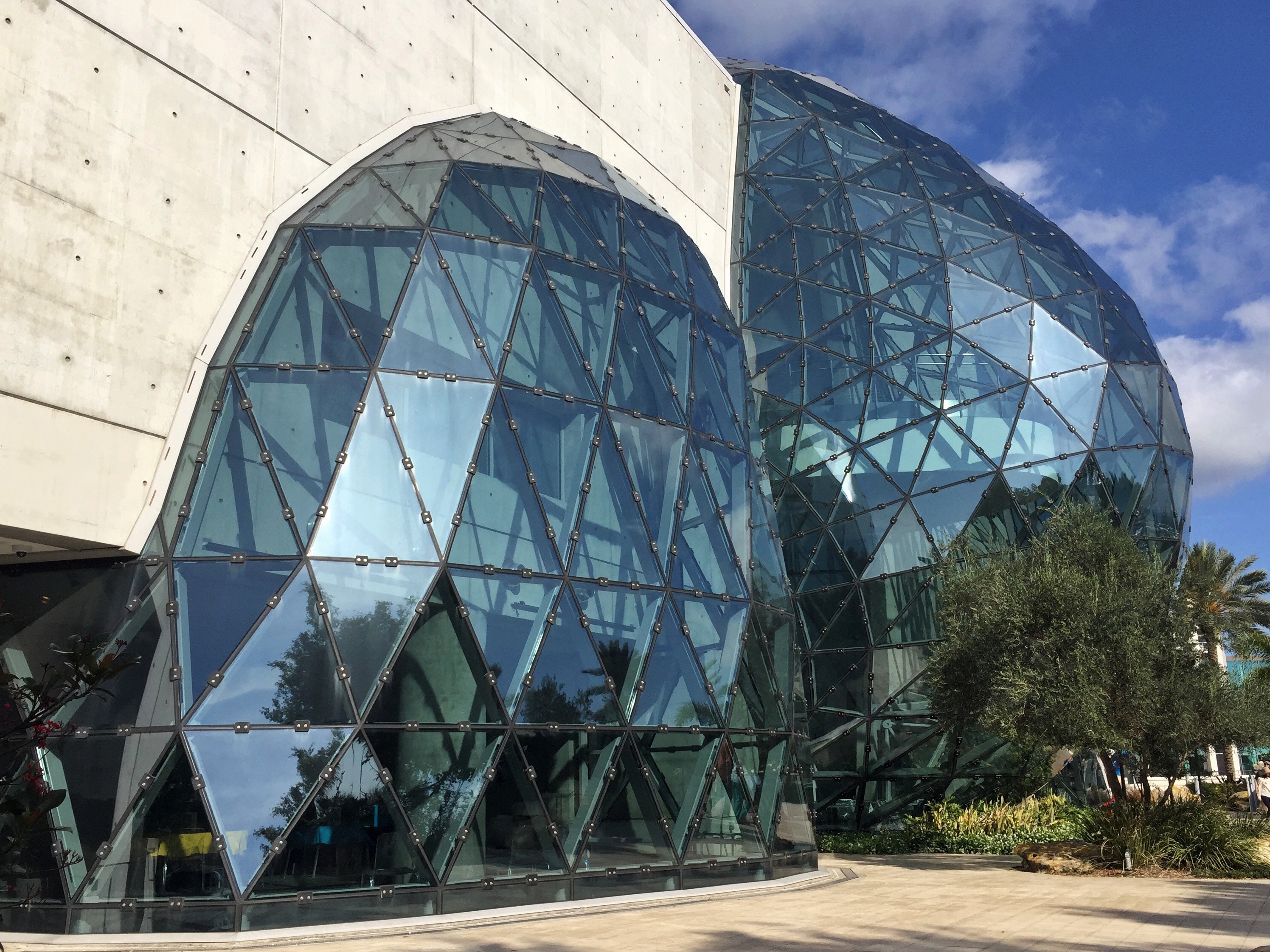 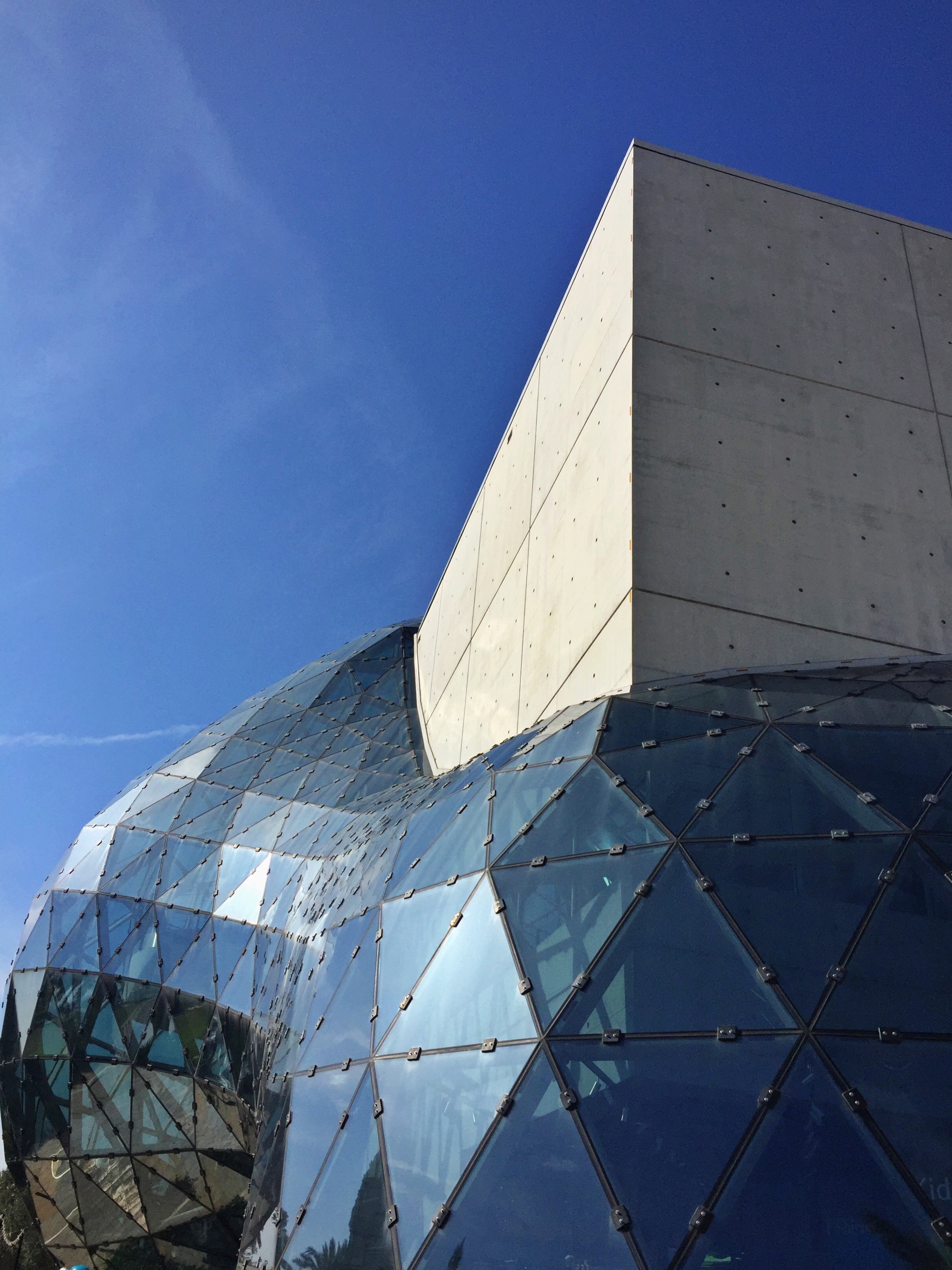 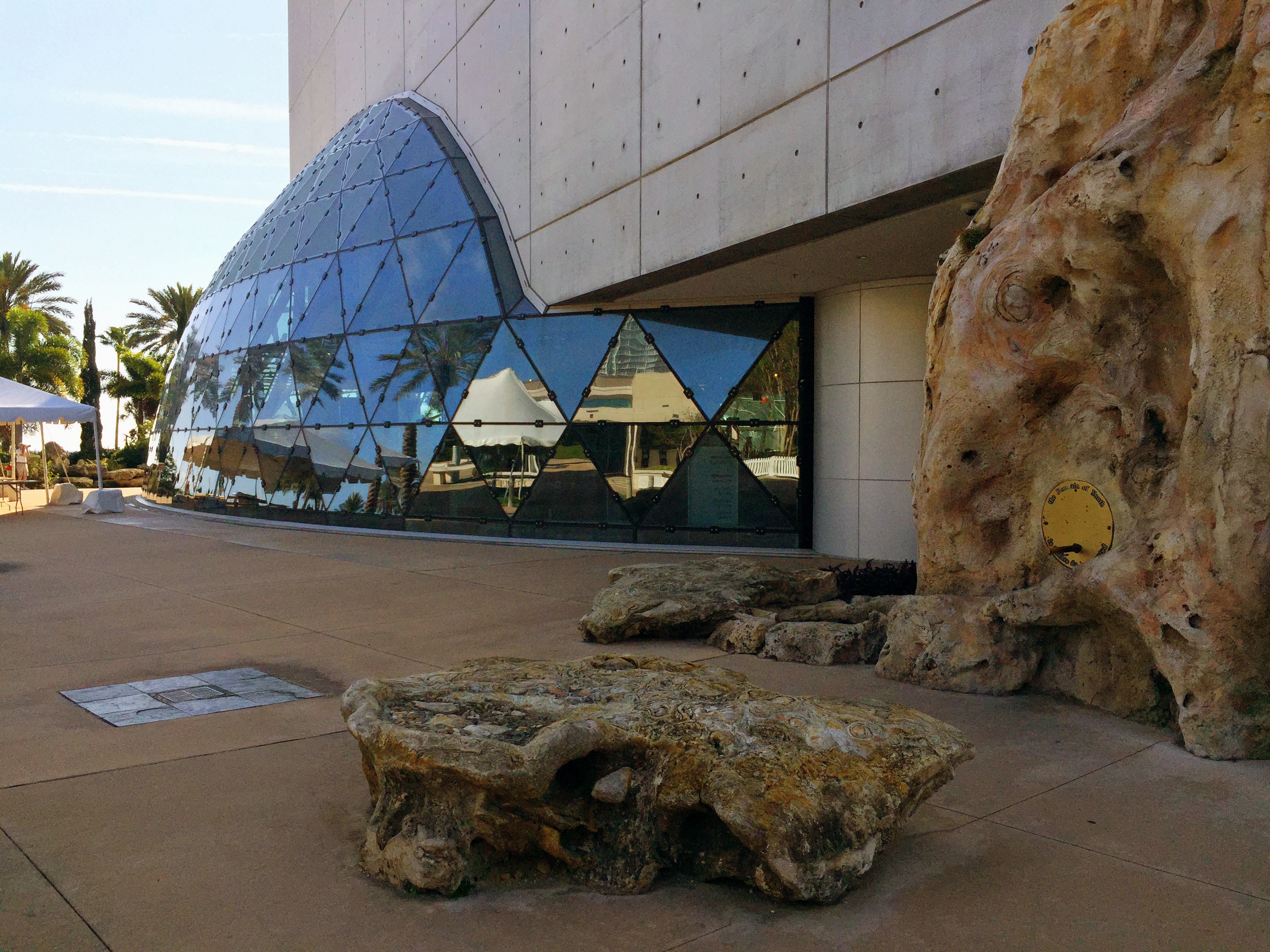 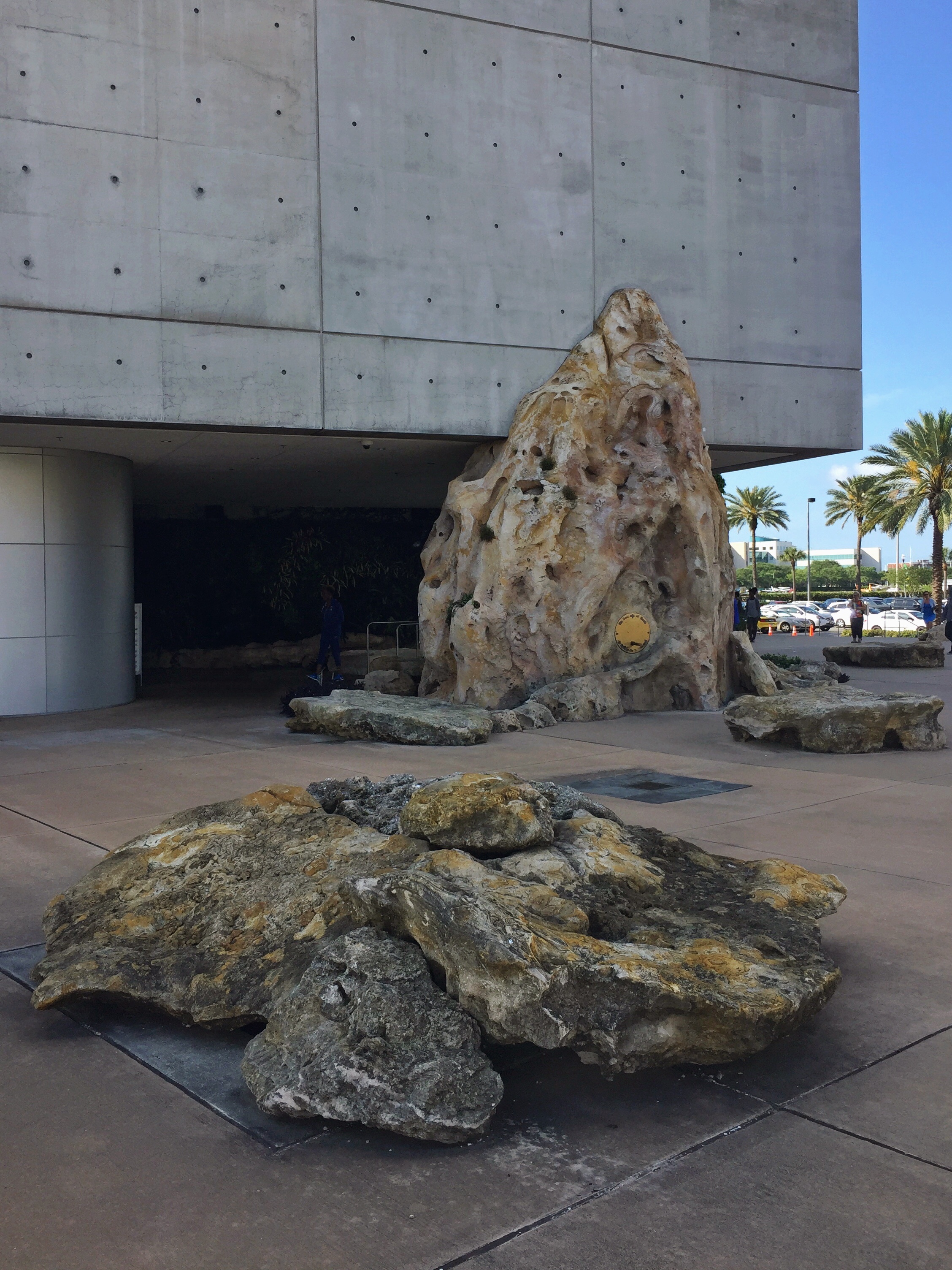 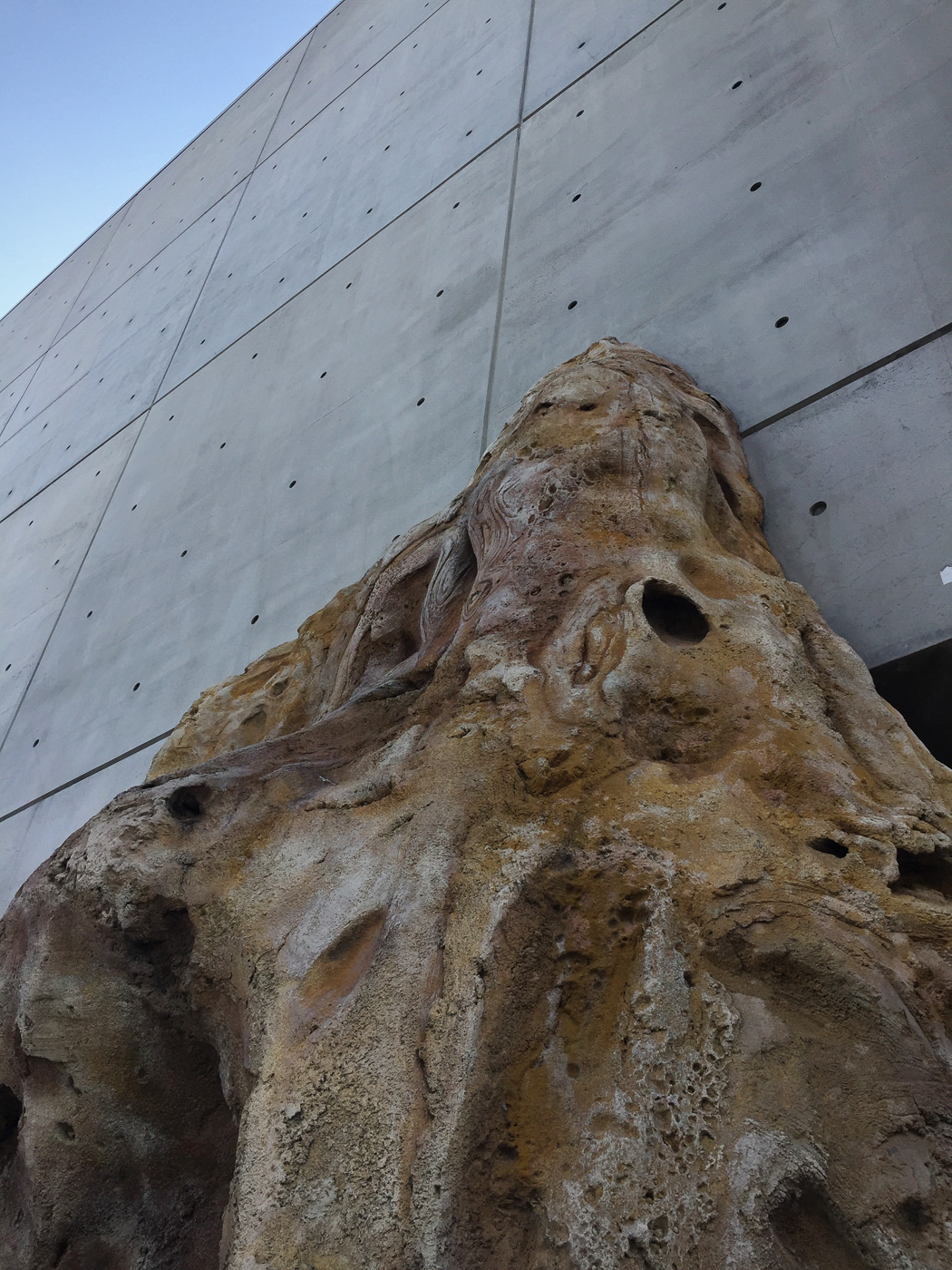 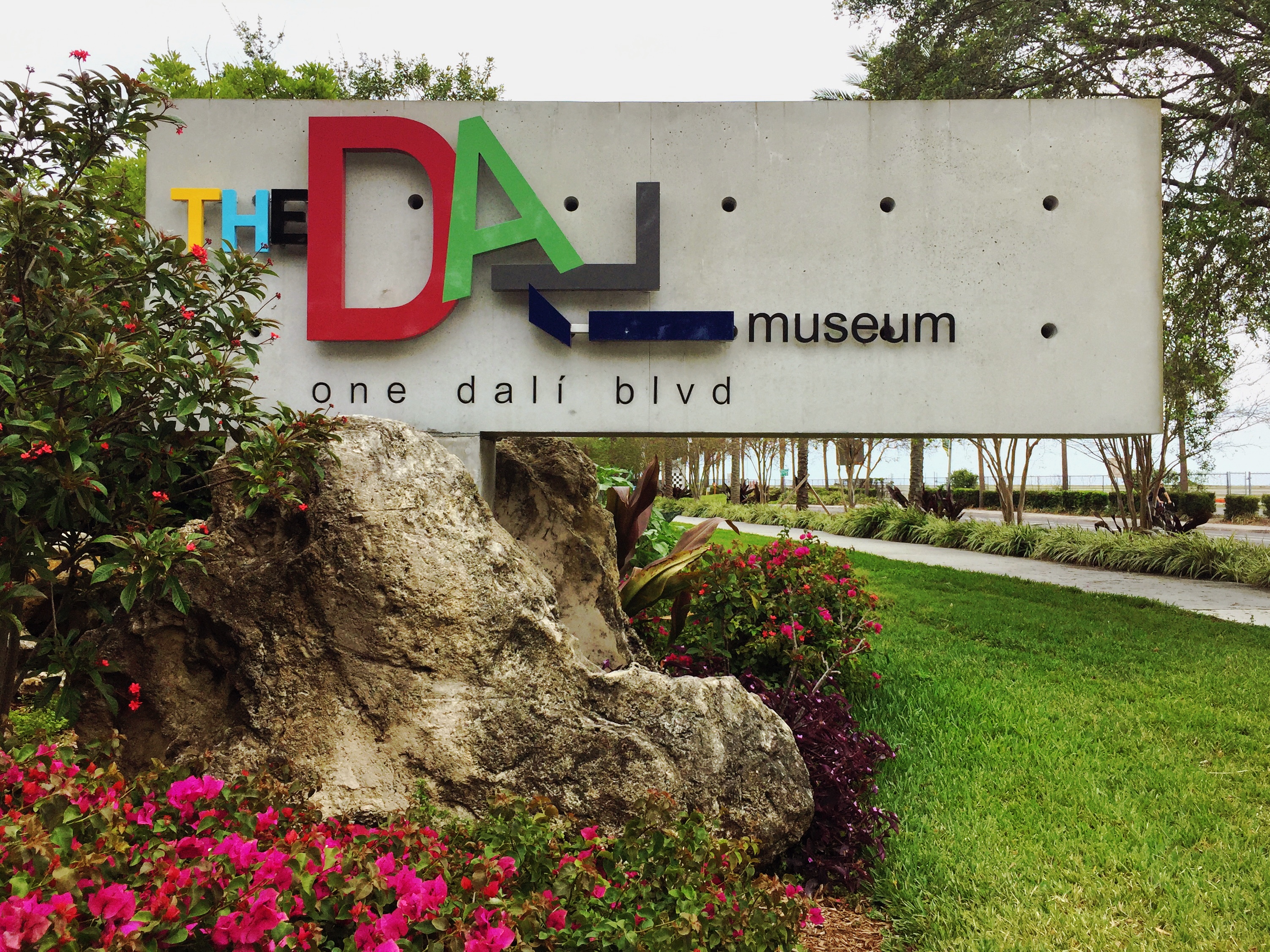 Before you enter the museum, be sure to visit the avant-garden which includes a labyrinth, a Wish tree, a “melting watch” bench and a new 17-foot long moustache sculpture created by Donald Gialanella, a local artist.  The previous sculpture was originally part of an outdoor billboard ad that was placed in the garden.  This sculpture was a popular spot to take photographs; however, the sculpture began to deteriorate over time.  Jim and I took our photograph with this moustache during our first visit to the museum in March 2014.  Below are a few images from the garden. 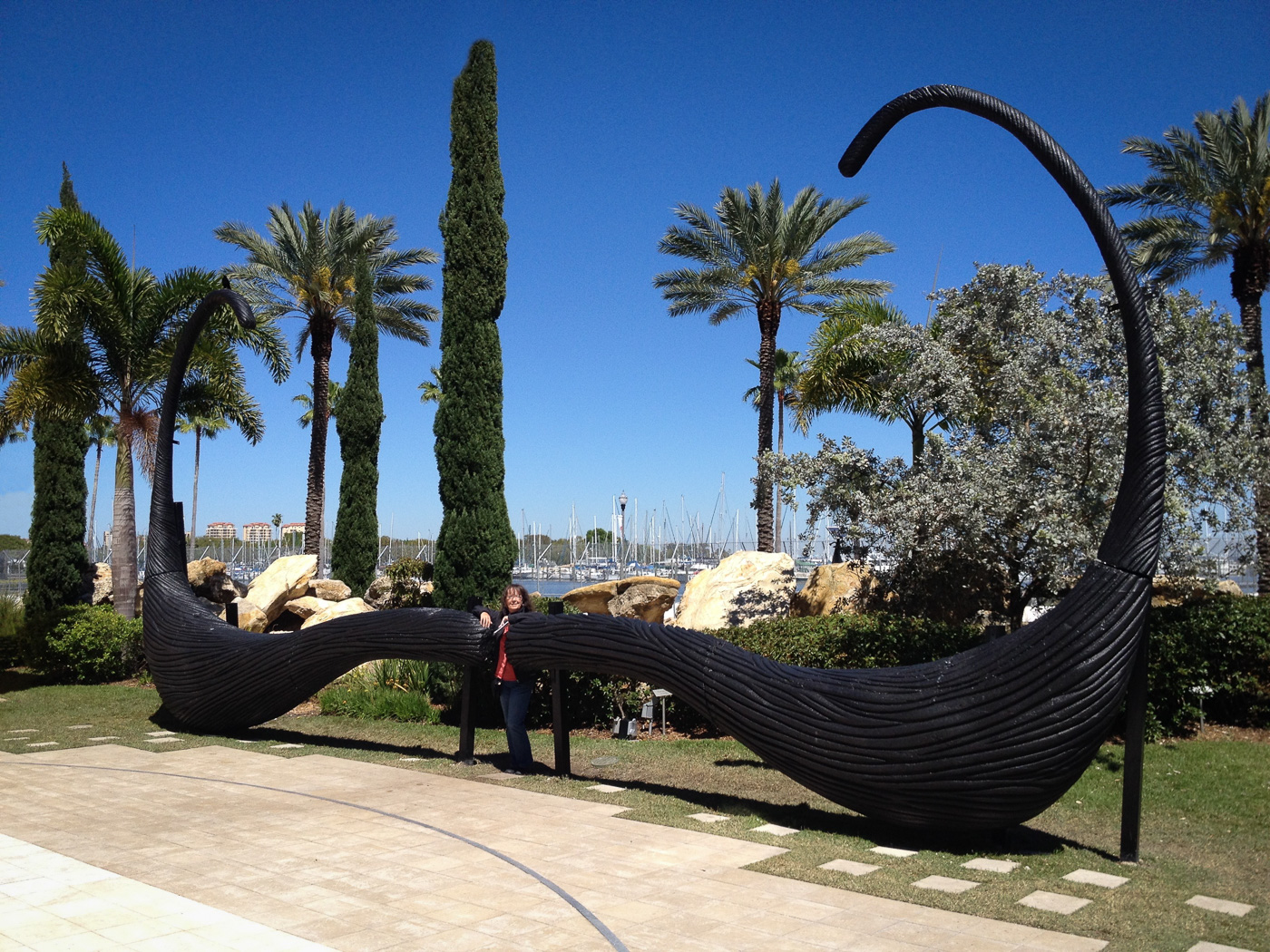 This is an image Jim took of me and the original moustache back in 2014. 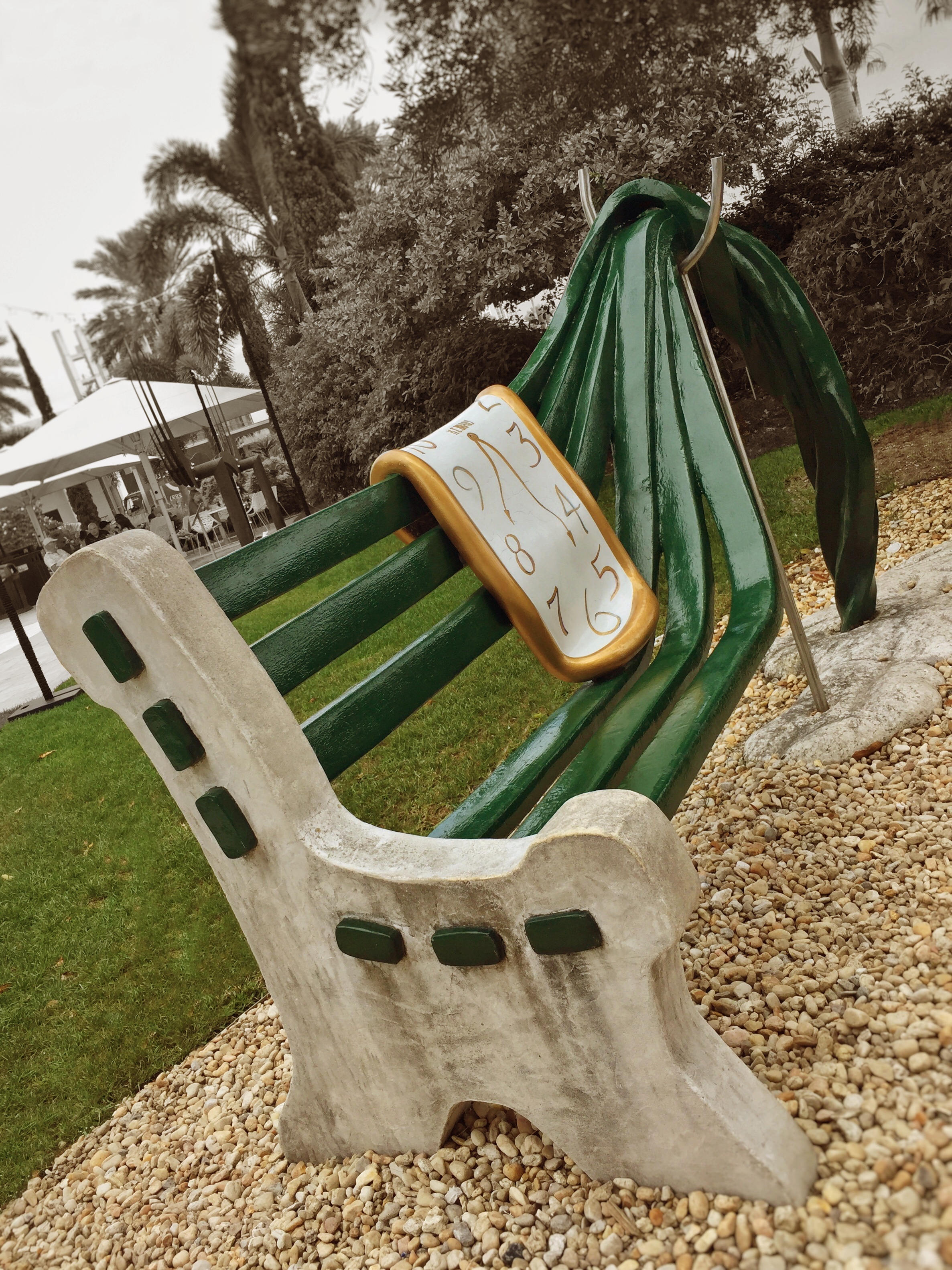 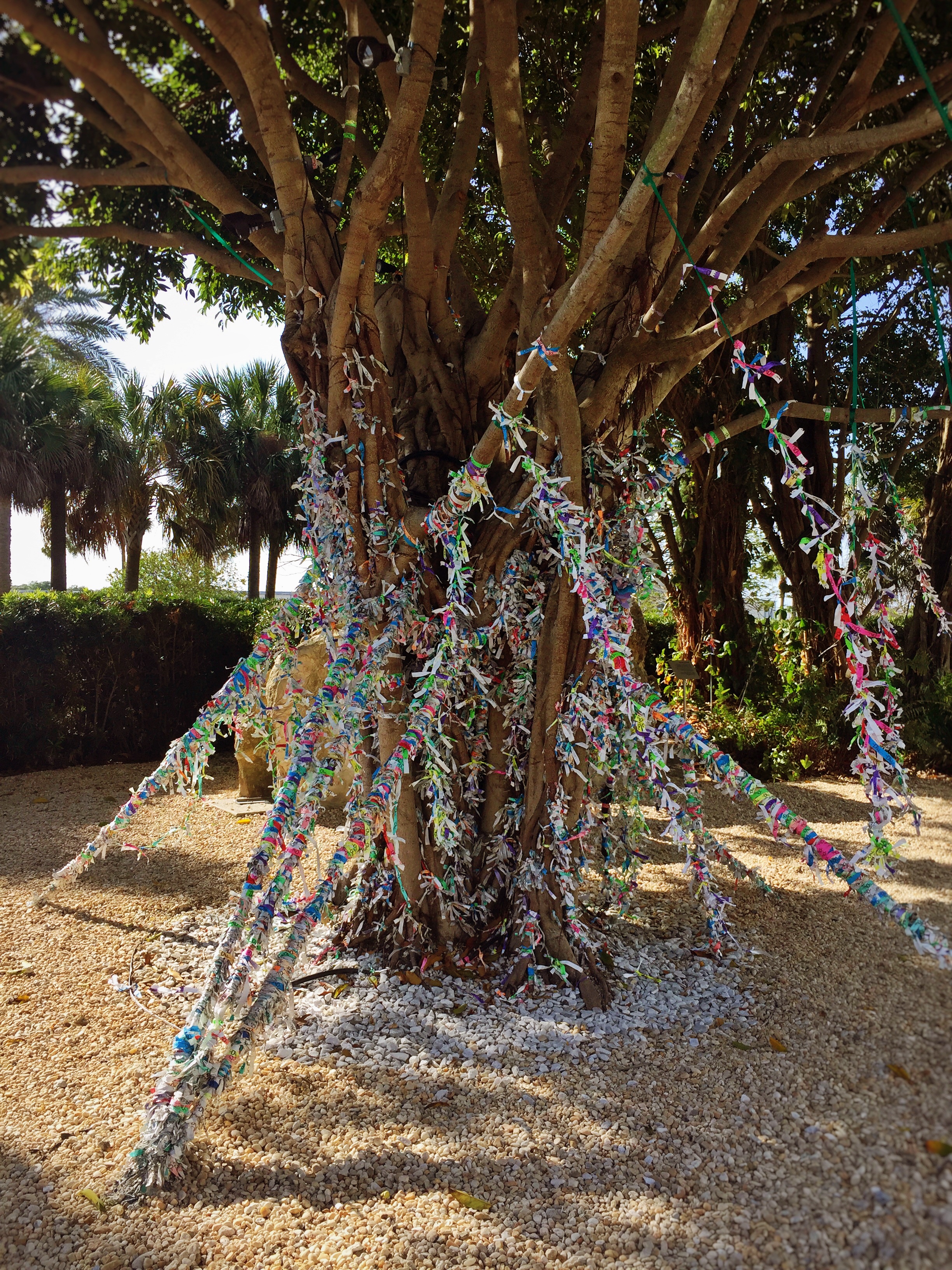 There is a plaque next to this tree that describes the Dali Wishing Tree.  It says, “This ficus tree, streaming with ribbons, carries the wishes of our visitors and community.  We invite you to contribute a wish to the tree and be part of a cultural tradition that extends back to Hindu and Scottish rites.  In all its forms, the wish tree invites and holds our fond hopes.” 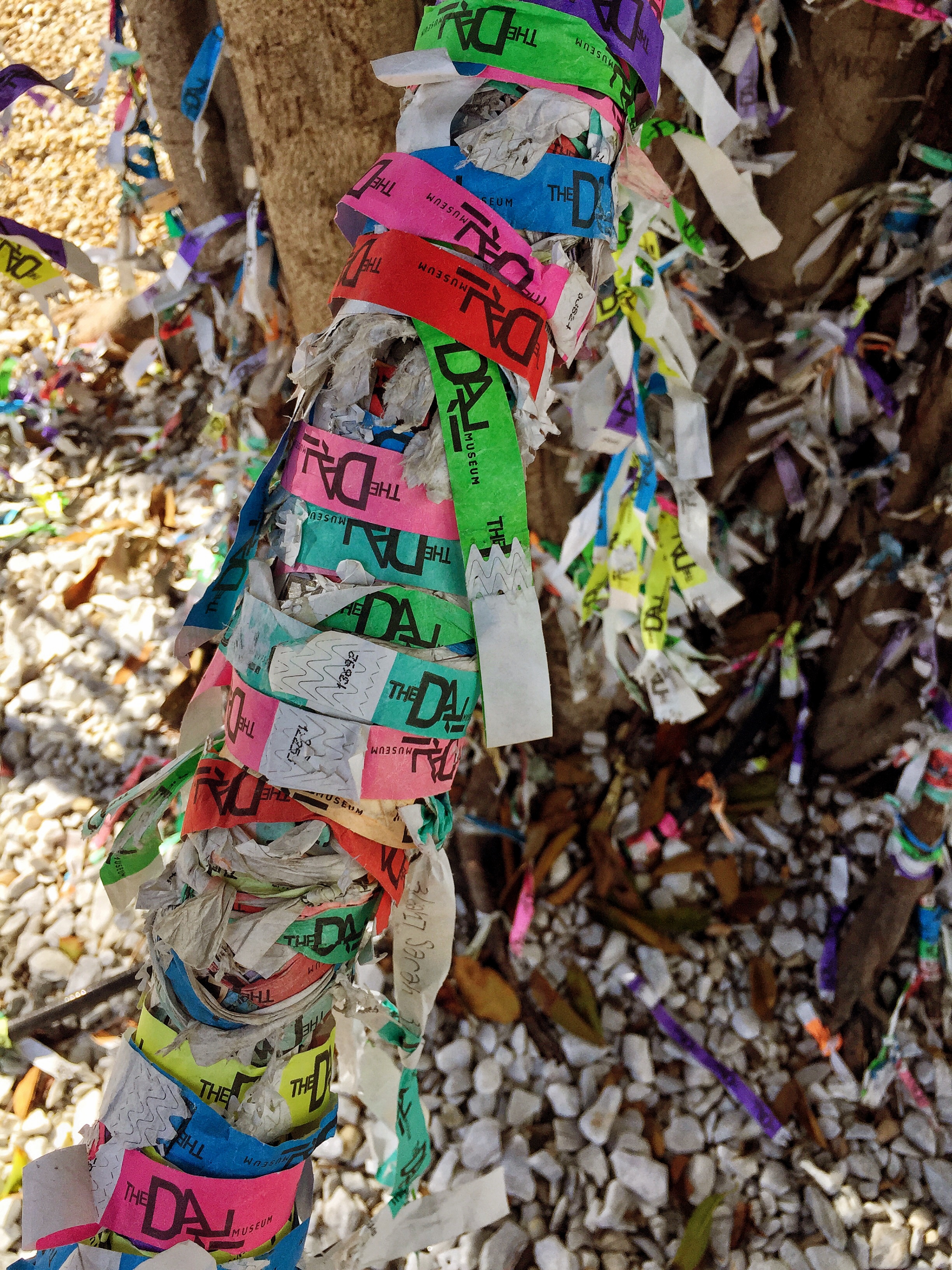 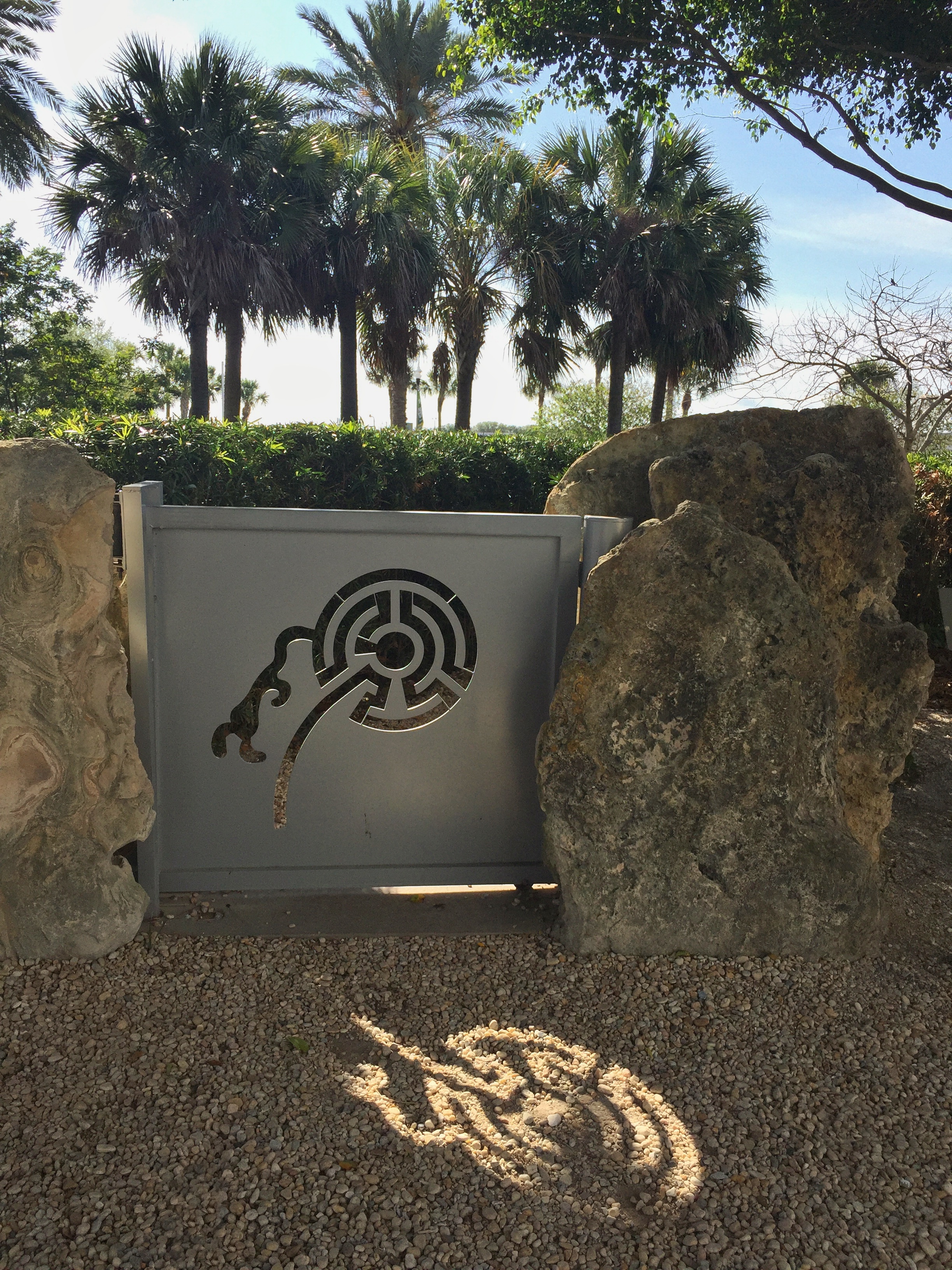 This gate is the entrance to the Dali Labyrinth.  “This garden structure is made of 6-foot-high podocarpus hedges with a single, swirling pathway that always leads to the centre and returns.  It was not constructed to cause confusion, but to promote a time of quiet reflection and soulful contemplation.  Allow 10-15 minutes to enjoy the Labyrinth.” 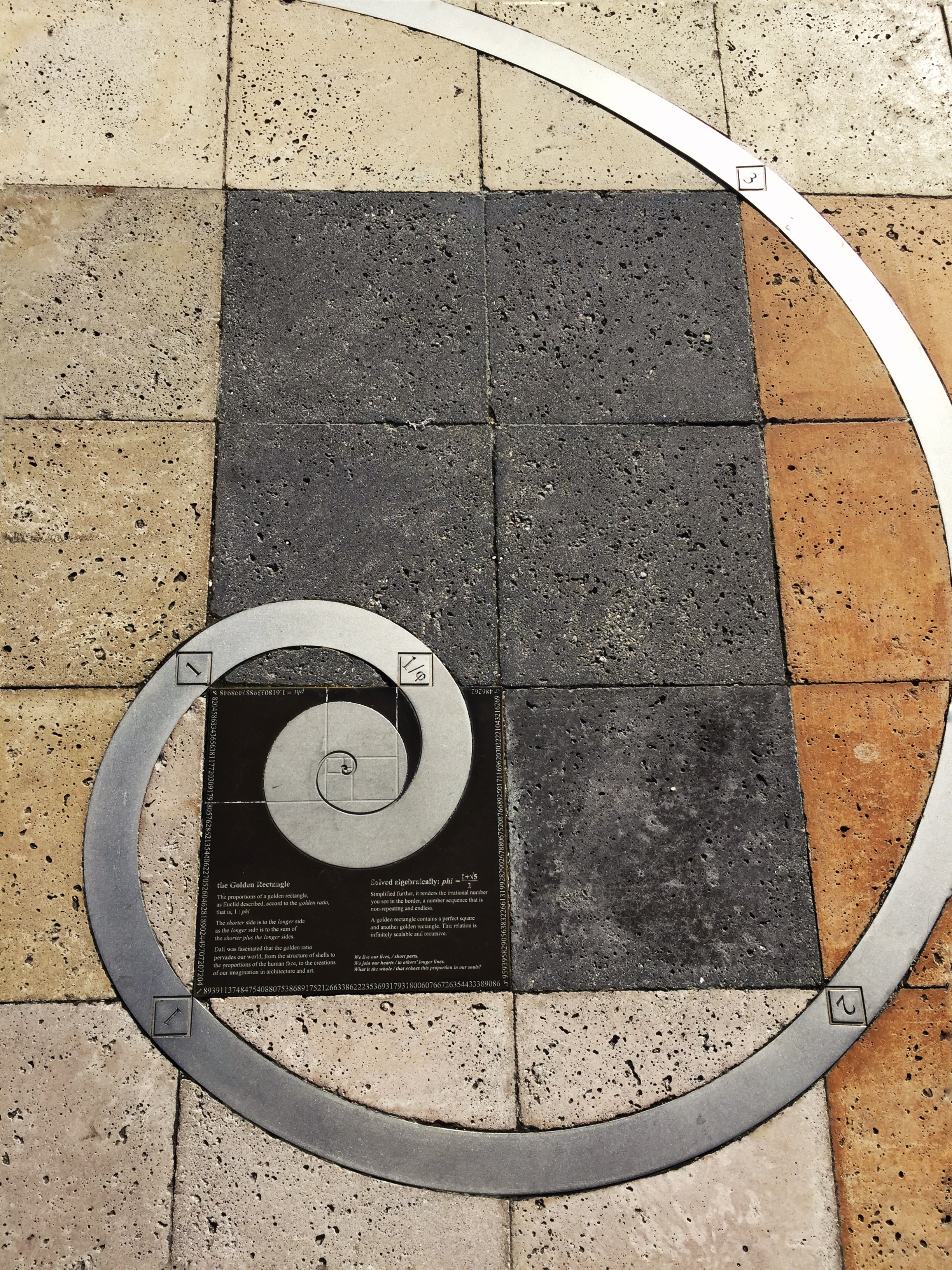 On the grounds, you will also find a plaque with a Golden Rectangle on it.  “Dali was fascinated that the golden ratio pervades our world, from the structure of shells to the proportions of the human face, to the creatures of our imagination in architecture and art.”

Once you enter the museum and purchase your ticket,  you will then enter the main lobby.  Here, you will find a cafe with a Spanish-inspired menu, a theatre where you can watch a film about the museum and the artist, restrooms, a gift shop and the grand ‘double-helix’ staircase which reaches nearly the full height of the 75-foot-high atrium.  You will also find an elevator, should you be unable to climb the staircase. 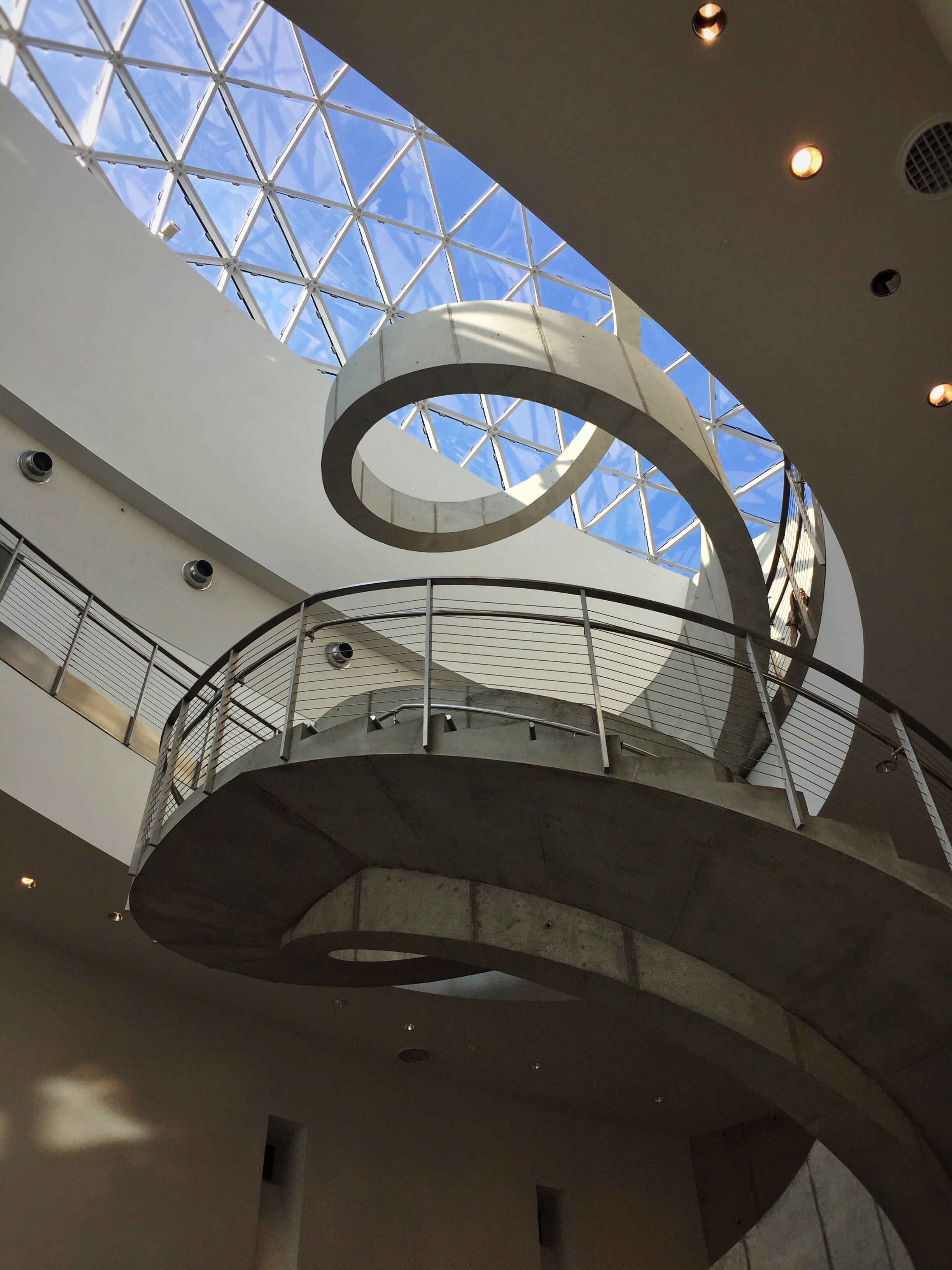 At the top of the stairs, you will find the Tom and Mary James Wing which holds the permanent collection gallery “The Works of Dali”.  Also on this level, you will find the Hough Family Wing which showcases special exhibitions.  This is the wing which is currently holding the Frida Kahlo exhibit.  This show began on December 17, 2016 and runs through April 17, 2017.  When Jim and I visited the museum in 2014, the special exhibit included works by Andy Warhol.

When you visit the galleries, consider taking an audiotour.  The museum includes these devices in your ticket price and you will find them at the bottom of the staircase as you first enter the atrium.

In the “Works of Dali” gallery, there are docent-led tours that run continually and these are also included in your ticket price.  These tours are excellent and the docents are very knowledgeable about Dali’s life and work.  Each guide has a unique approach to the life and work of Salvador Dali.  Sometimes, it can be interesting to take more than one tour as you may learn something different from each tour guide.  During our first visit back in 2014, our guide looked a lot like Salvador Dali.  Below, are a few images from the permanent collection. 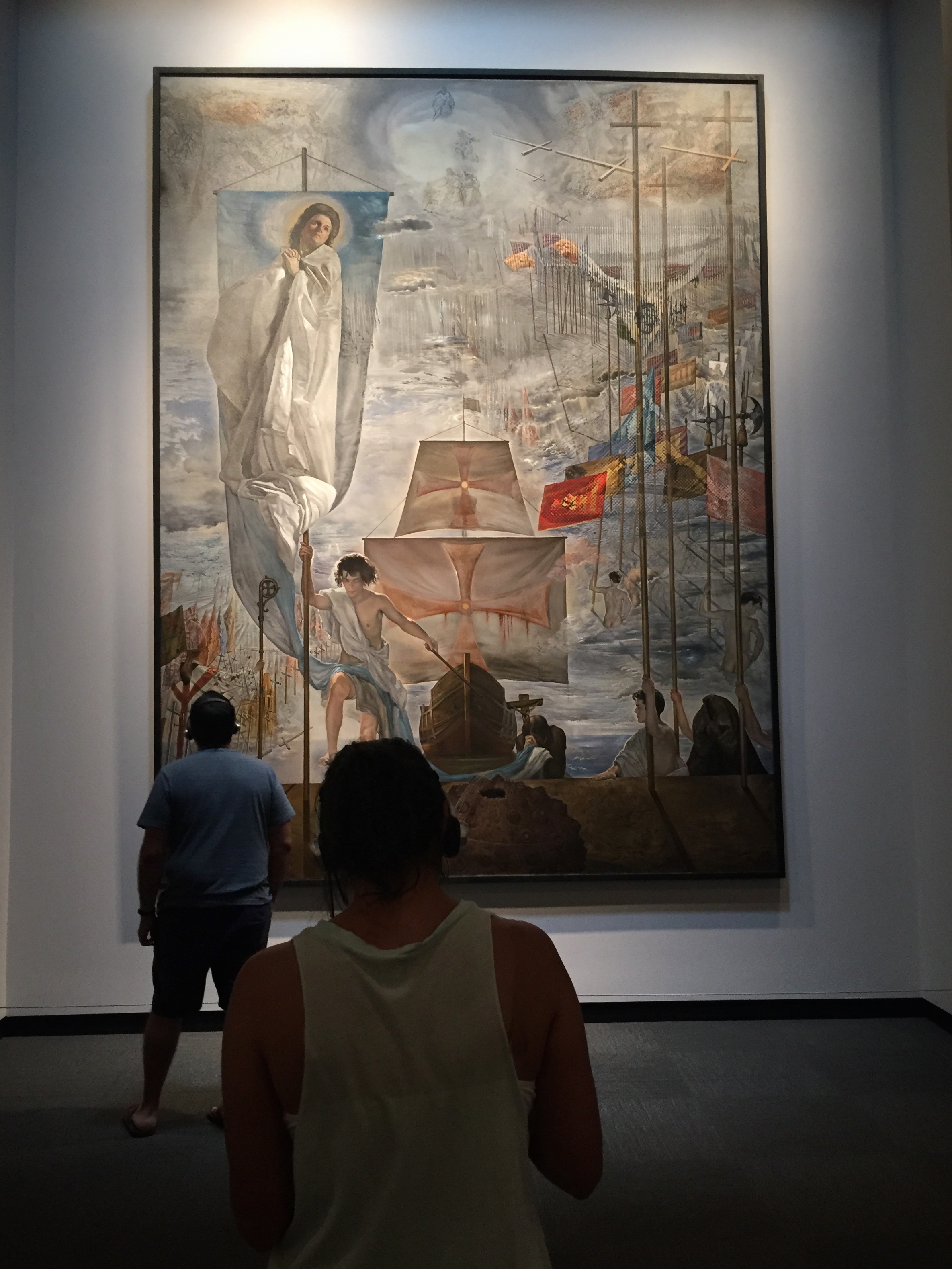 “The Discovery of America by Christopher Columbus” 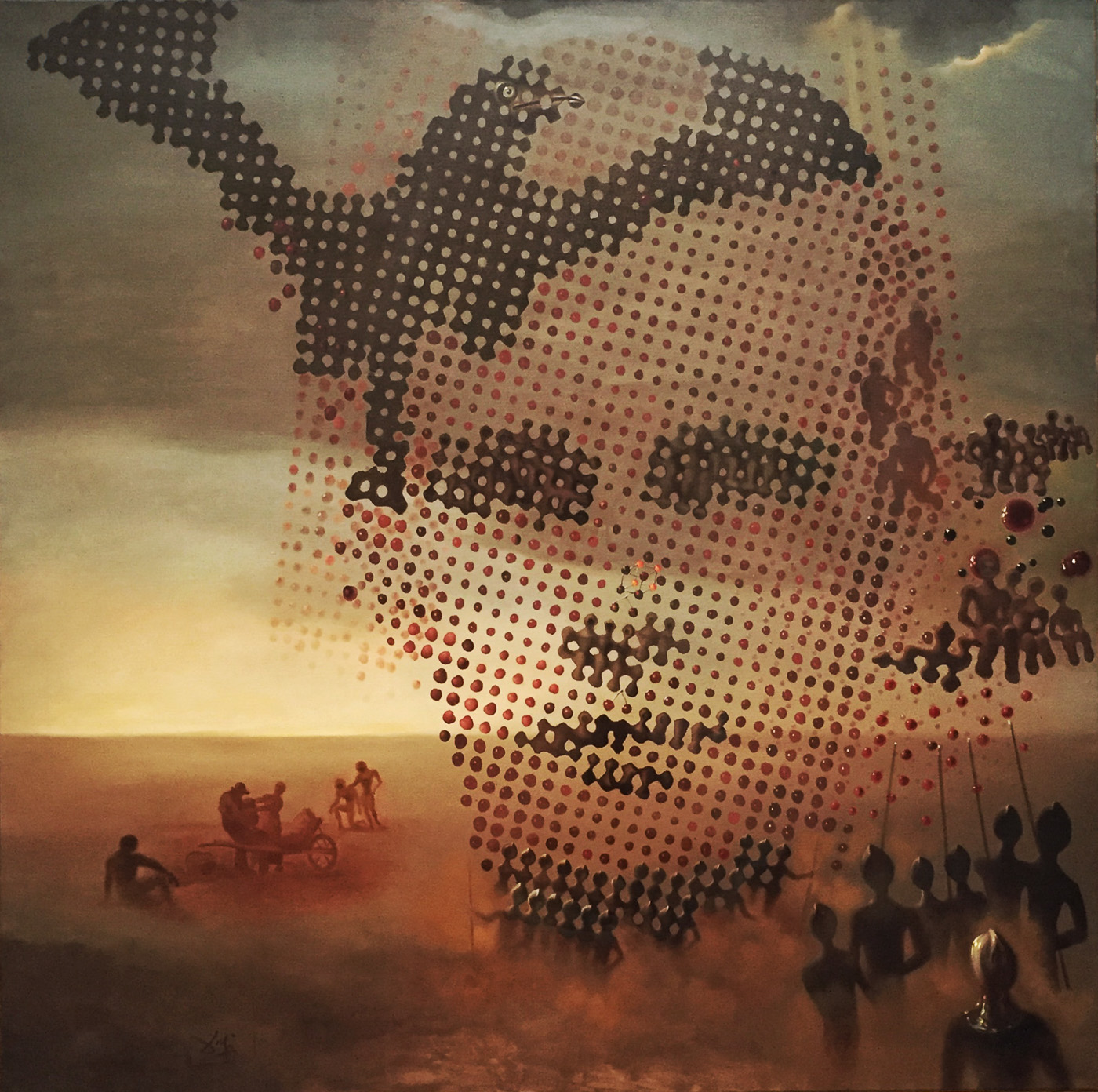 “Portrait of My Dead Brother”
Salvador Dalí
1963
Oil on canvas 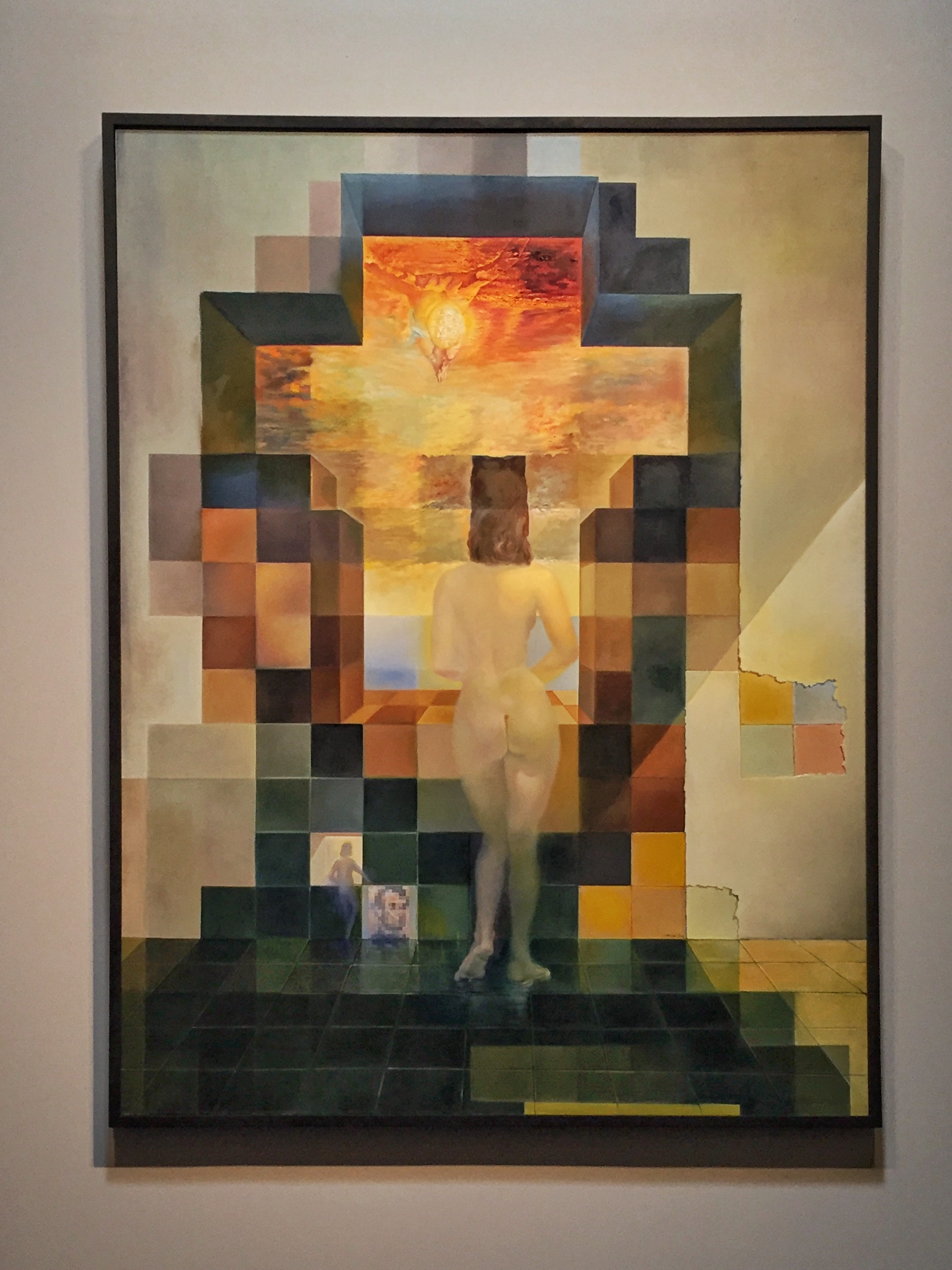 When we completed our tour of the Dali permanent collection, we entered the Frida Kahlo exhibition.  You can view the exhibit on your own or you can take an audiotour which is narrated by actress, Susan Sarandon.

This special exhibit presents more than 60 pieces, including 15 paintings, seven drawings and numerous personal photographs.  It is quite a moving exhibit.  Below is a sampling from the exhibition. 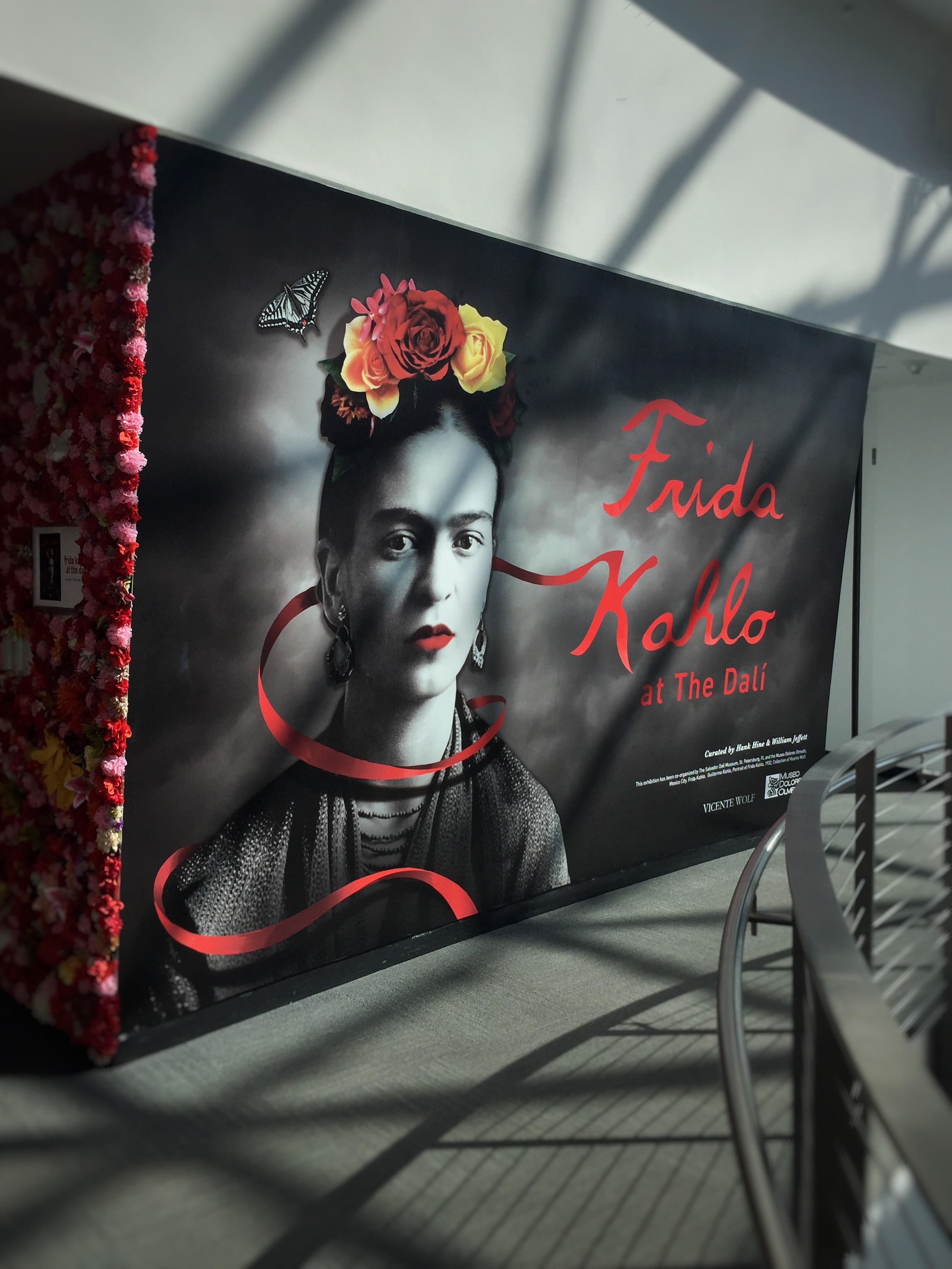 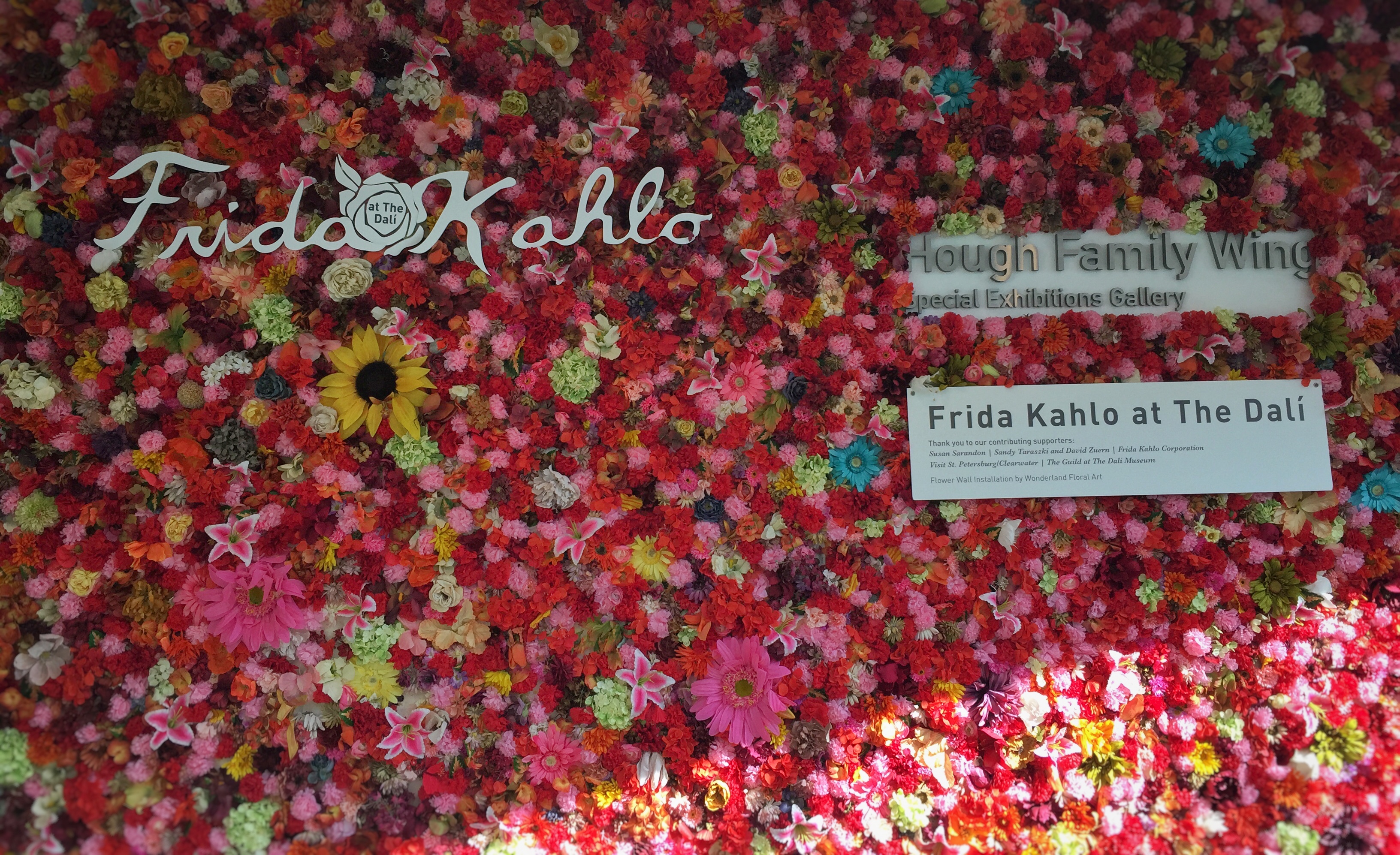 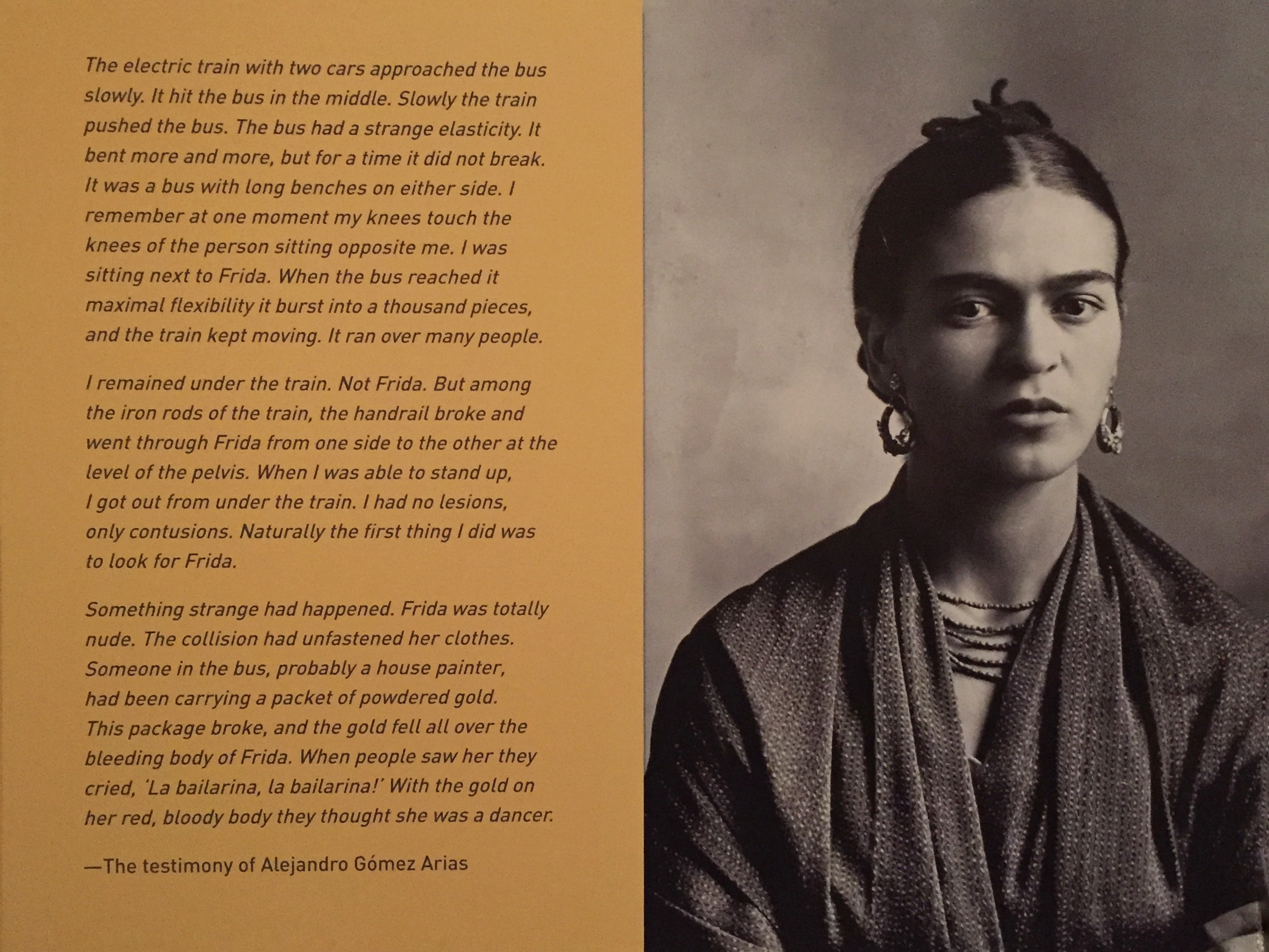 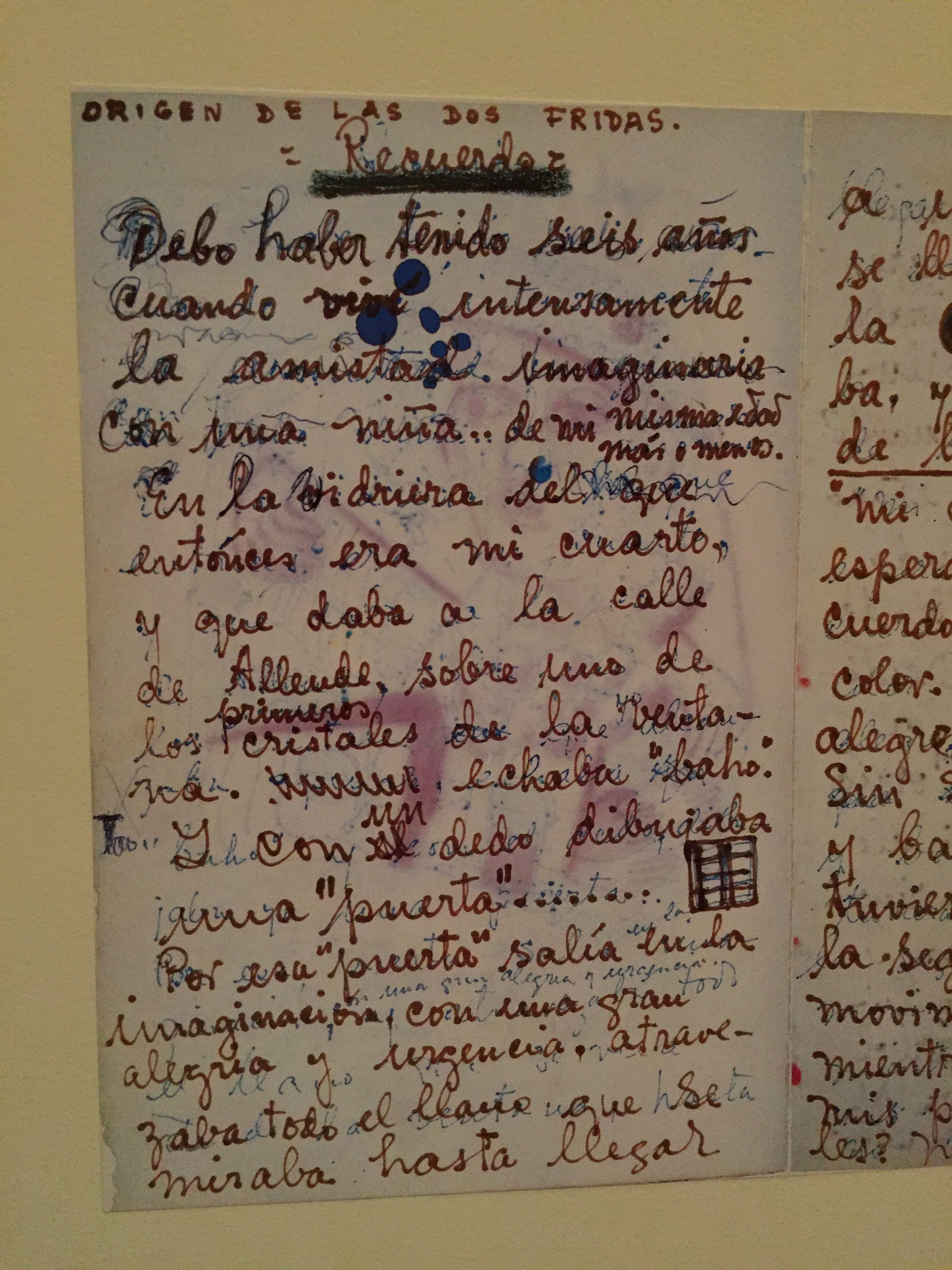 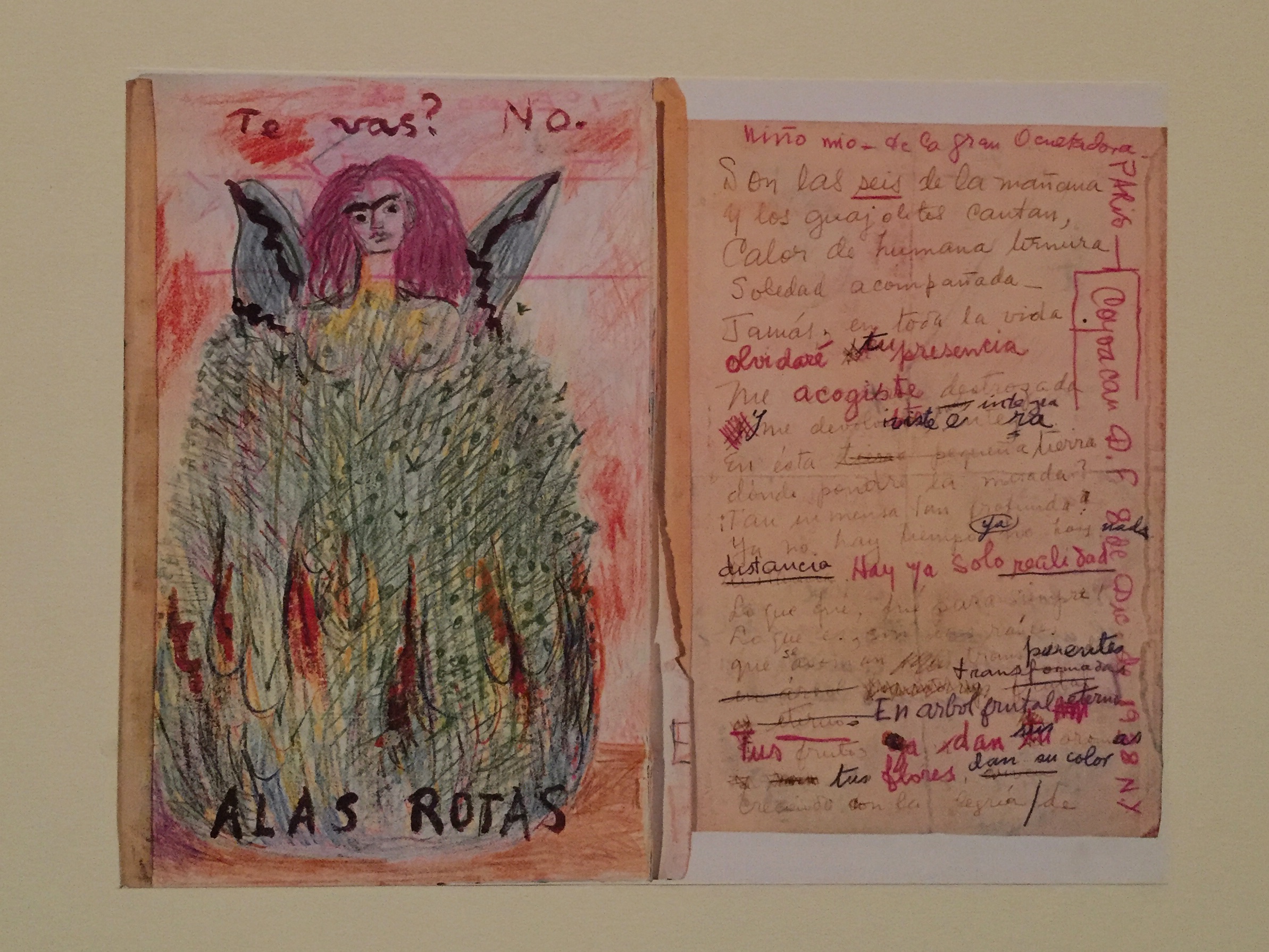 The two images above are pages from Frida’s Journals.  You will notice that the first image shows double writing.  Frida would often write first in blue and then overwrote the same words with larger letters in brown ink. 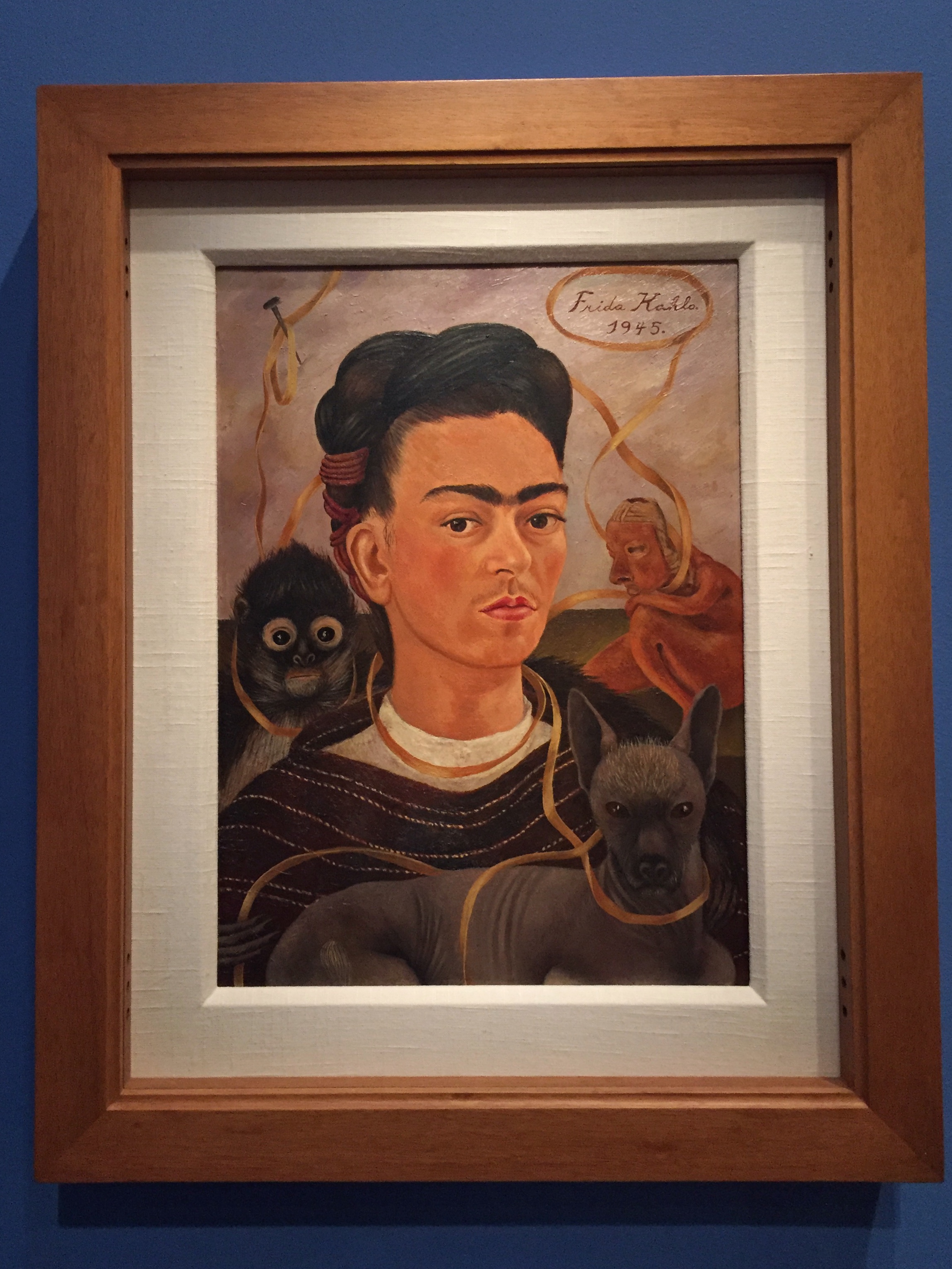 If you plan to visit the Dali Museum in St. Petersburg, Florida, be sure to allow plenty of time to enjoy your visit.  You can spend one to two hours or spend the day.

The Dali museum is a family-friendly environment and offers outdoor experiences, learning activities and special programs and events designed with kids in mind.  The Dali museum believes that “Art is for everyone”.

Have you visited the Dali museum?  What was the highlight of your visit?