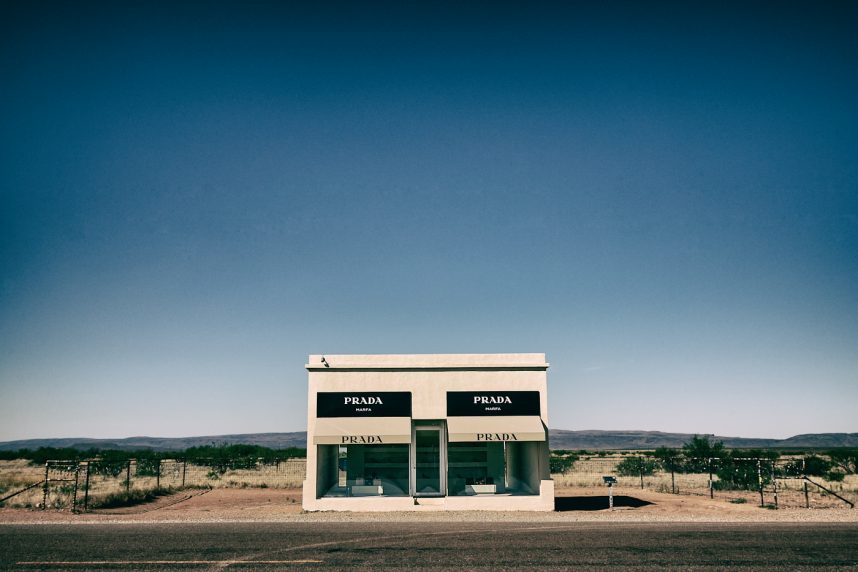 In May of this year,  Jim and I flew to El Paso, Texas to visit his aunt Henni who had recently celebrated her 90th birthday.  It was our first trip to El Paso and we were looking forward to seeing his aunt, other family members and experiencing Texas.

Jim’s cousin, Janet and her husband Robert were incredible hosts and we had such a great time.  In fact, Robert and Janet treated us to a ball game - the El Paso Chihuahuas vs. The Salt Lake Bees.  This was my first time at a Triple A game.  Now I understand why there are so many baseball fans.  In case you were wondering, the Chihuahuas won.

Prior to our trip, Jim and I talked about the places we hoped to visit during our stay.  Jim was interested in visiting two places in New Mexico, White Sands National Monument and the Carlsbad Caverns.  I was interested in visiting two sites in Texas, Prada Marfa and Ryan Ranch.  Ryan Ranch was the film location for the 1956 film “Giant” starring Elizabeth Taylor, James Dean and Rock Hudson.

Ryan Ranch has special meaning for me.  In a short story that I wrote in response to a Writers’ Prompt: “A Cup of Coffee, New York City, 1950s” I wrote a scene which involved the movie “Giant”.

Prior to doing some research for my story, I did not know that Ryan Ranch was used as a film location.  As I did some research about Texas for our trip, I discovered that Ryan Ranch was not far from Prada Marfa.  I was hoping to see the remanent of the farmhouse on the ranch; however, it is long gone.  Nonetheless, it was great to see the film location and image the hustle and bustle during that time.

Prada Marfa had been on my list for quite a while.  I can not remember how I first came across the story of Prada Marfa; however, I knew that I would have to visit it one day to photograph it.  It was the contrast of a commercial boutique situated in the middle of nowhere that struck me.  Of course, I was also drawn to the fact that it was an interesting building on its own.  I added this site to my bucket list and hoped that I would be able to visit it one day before the art installation disappeared over time.

If you are not familiar with Prada Marfa, “Prada Marfa is a site-specific, permanent land art project by artists Elmgreen & Dragset constructed in 2005.  It is modeled after a Prada boutique, the inaccessible interior of the structure included luxury goods from Prada’s fall collection from that year.  The door does not open, ensuring that the sculpture will never function as a place of commerce.  Art Production Fund and Ballroom Marfa co-produced the project.”

When Jim and I we first arrived at the art installation, I was struck by the contrast of the building against its environment.  It was hard to miss.  I quickly grabbed my camera and walked around the building and grounds to think about the stories I wanted to tell.  I could easily have spent several days photographing Prada Marfa; however, I only had a few hours.  It would be great to photograph it at sunset.  Perhaps, I will return again one day.

Prada Marfa has seen its share of photographers over the years from tourists to professionals such as Gray Malin.  This installation attracts a variety of art enthusiasts, tourists and photographers and it is interesting to see how each individual records their personal experience from this site.

Below are a few images from my trip to Prada Marfa and Ryan Ranch.  I hope you enjoy them.

Have you visited Prada Marfa? 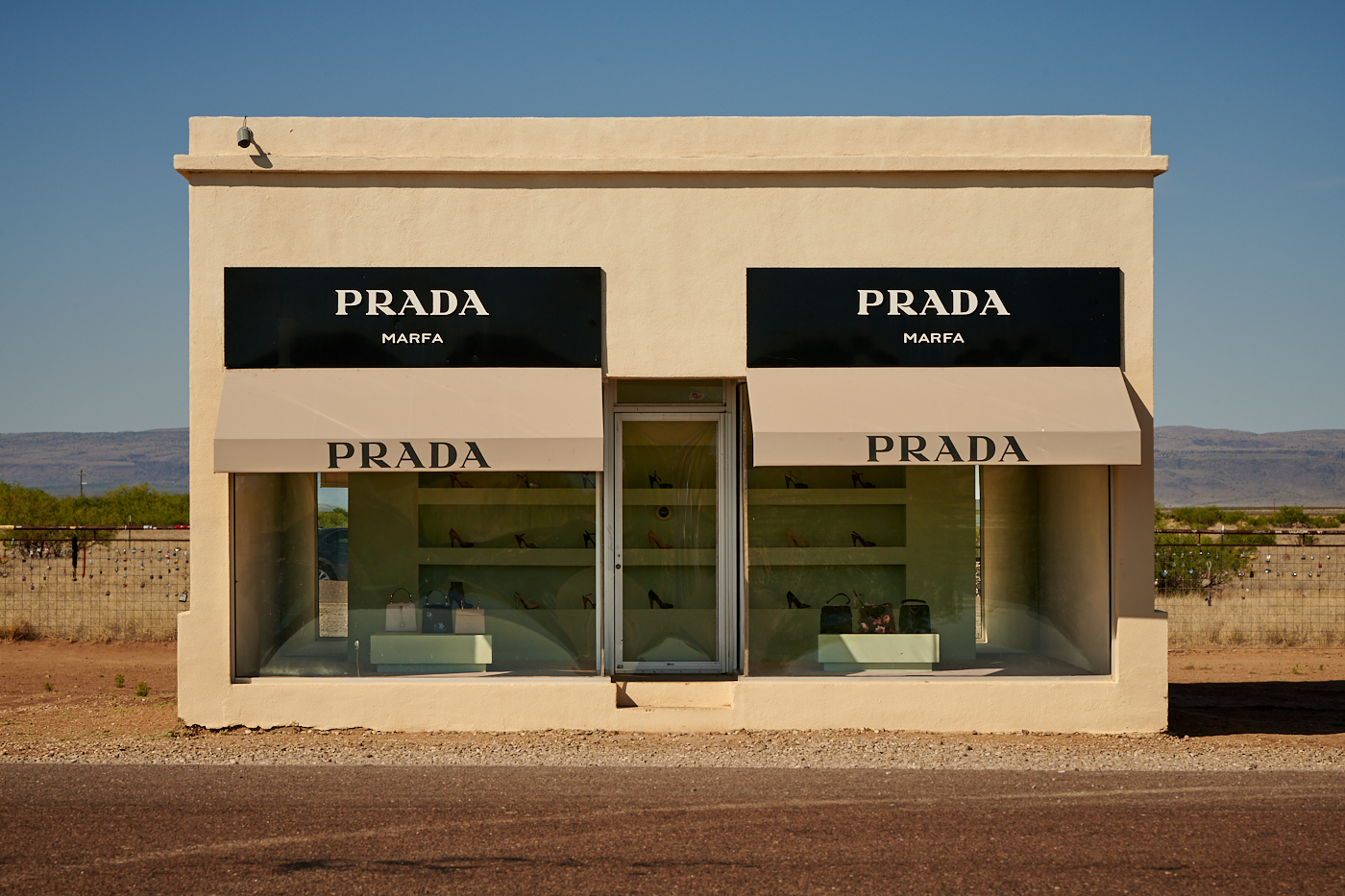 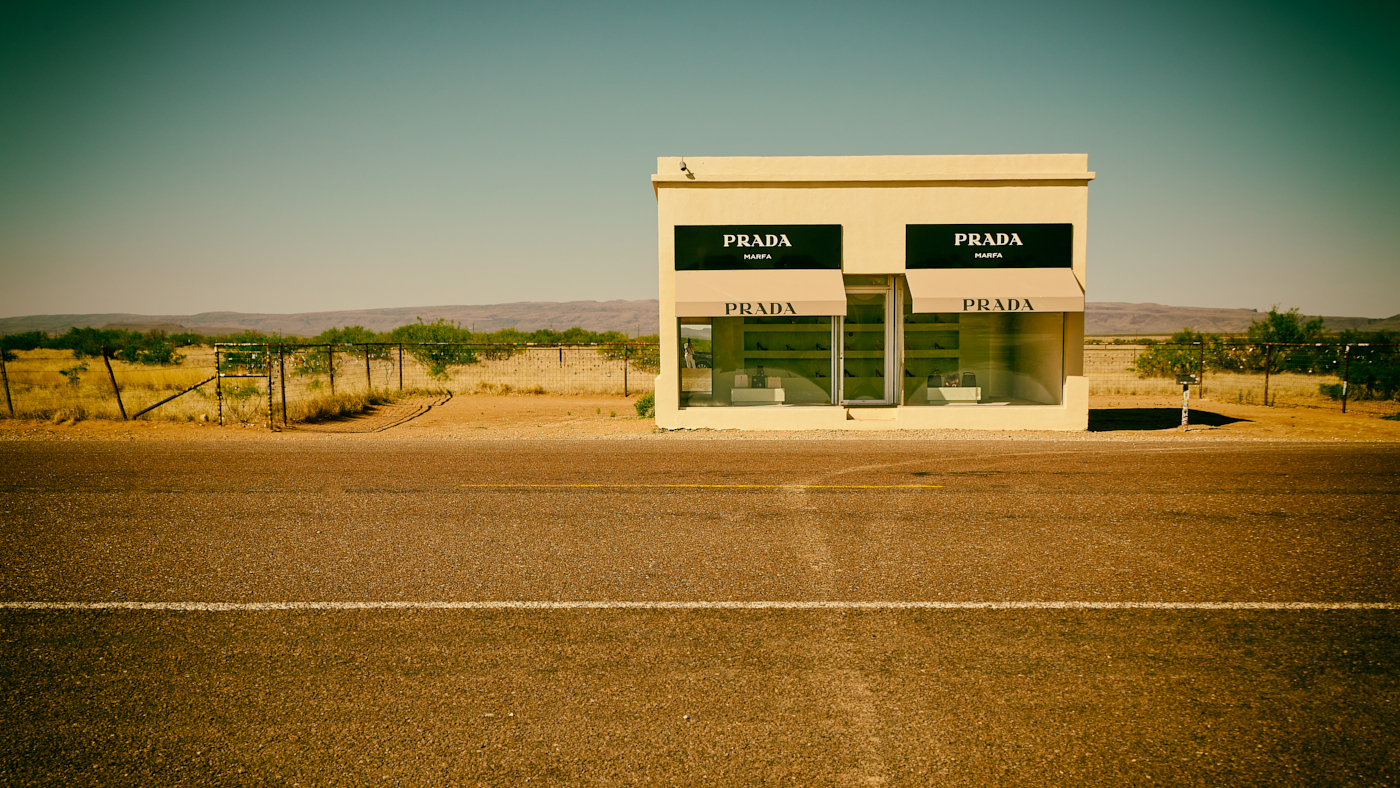 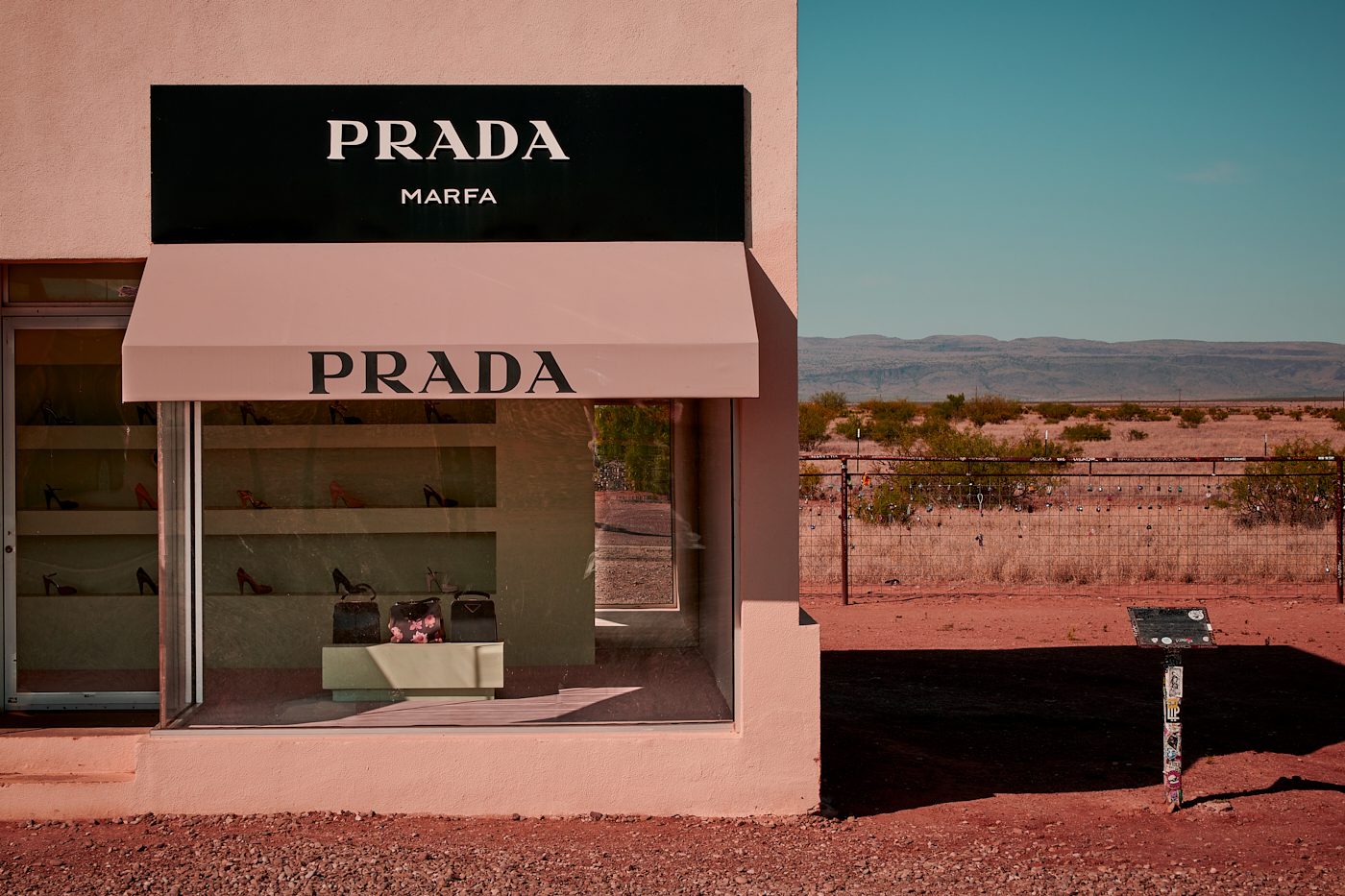 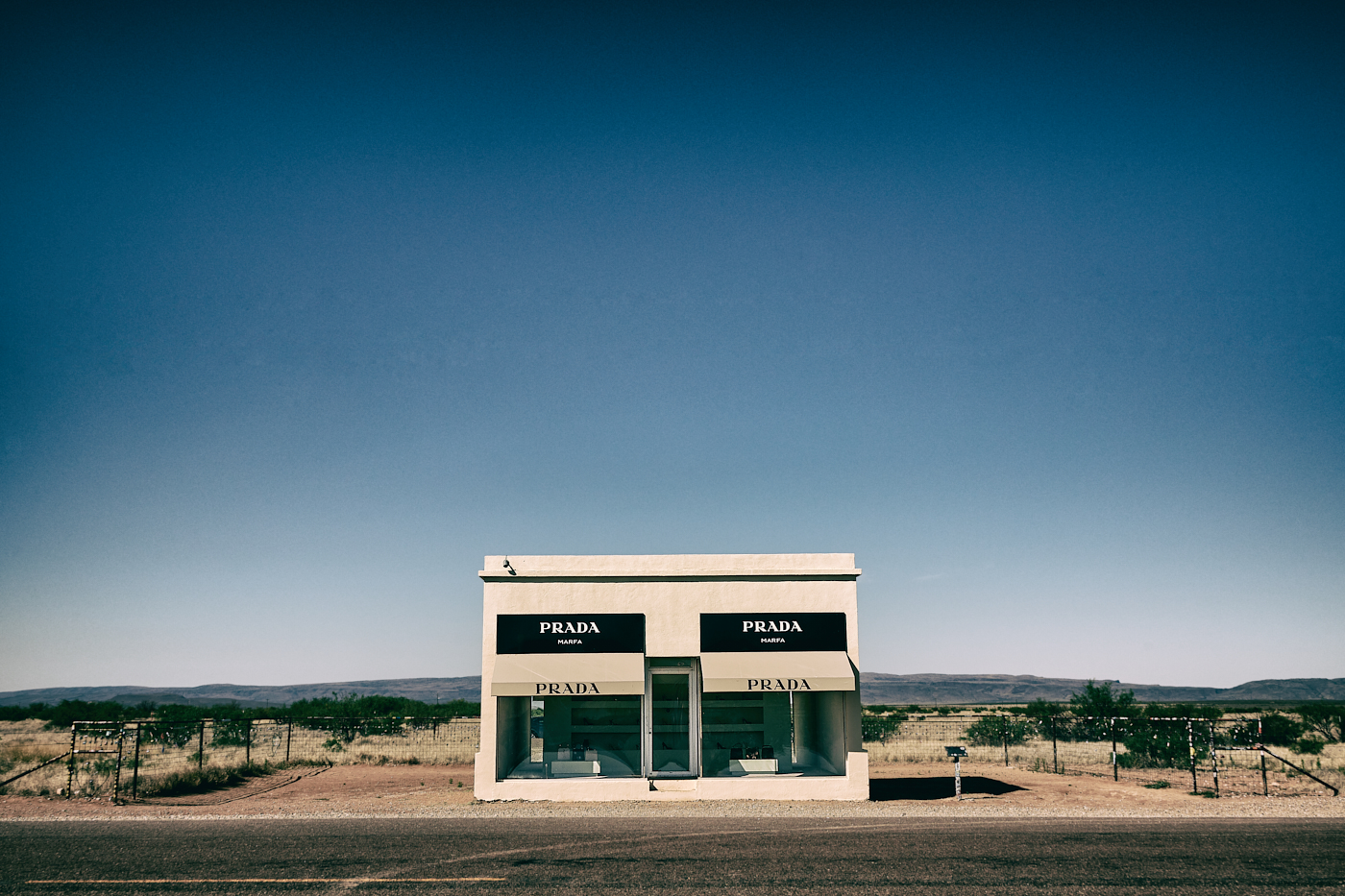 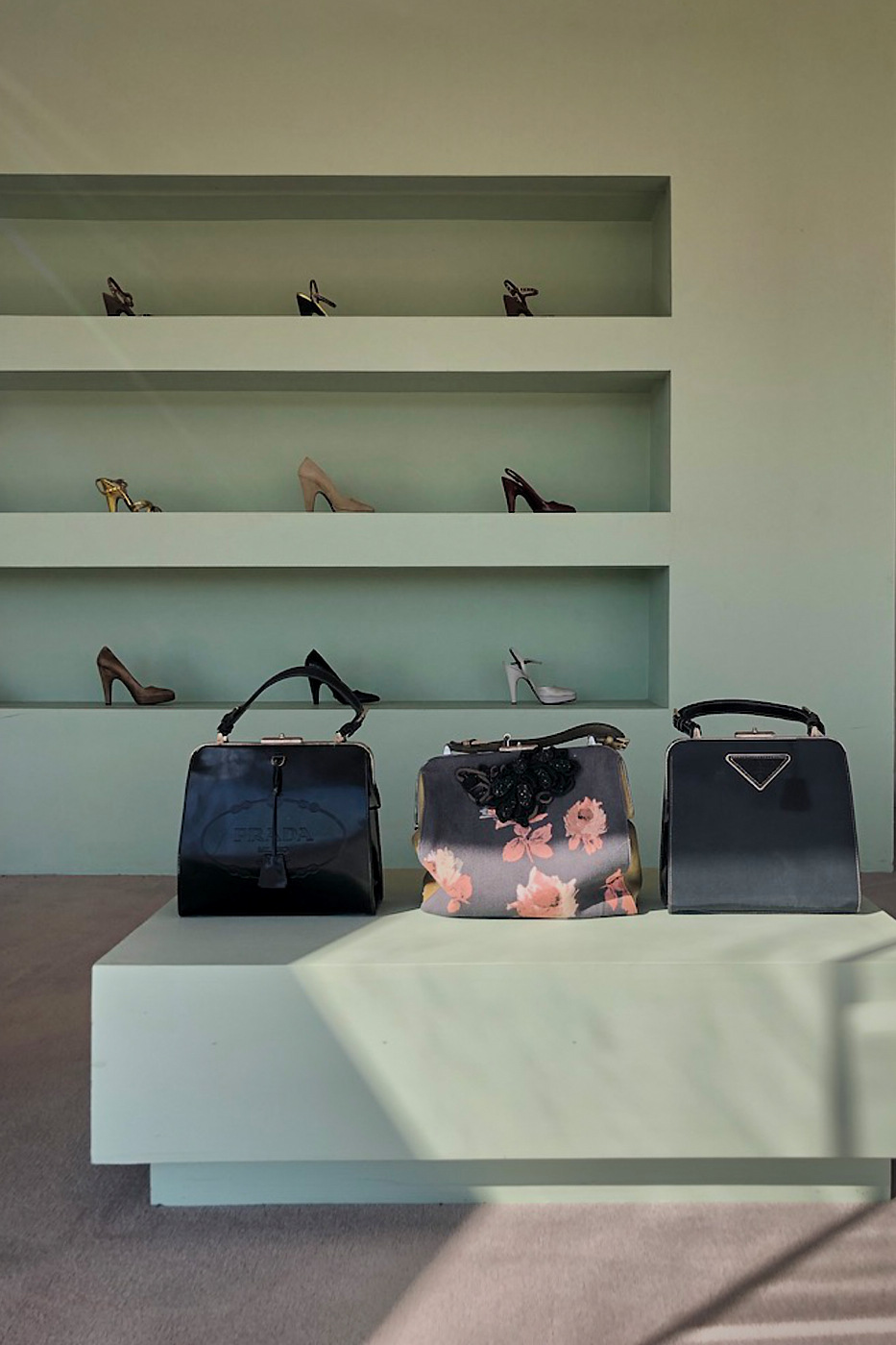 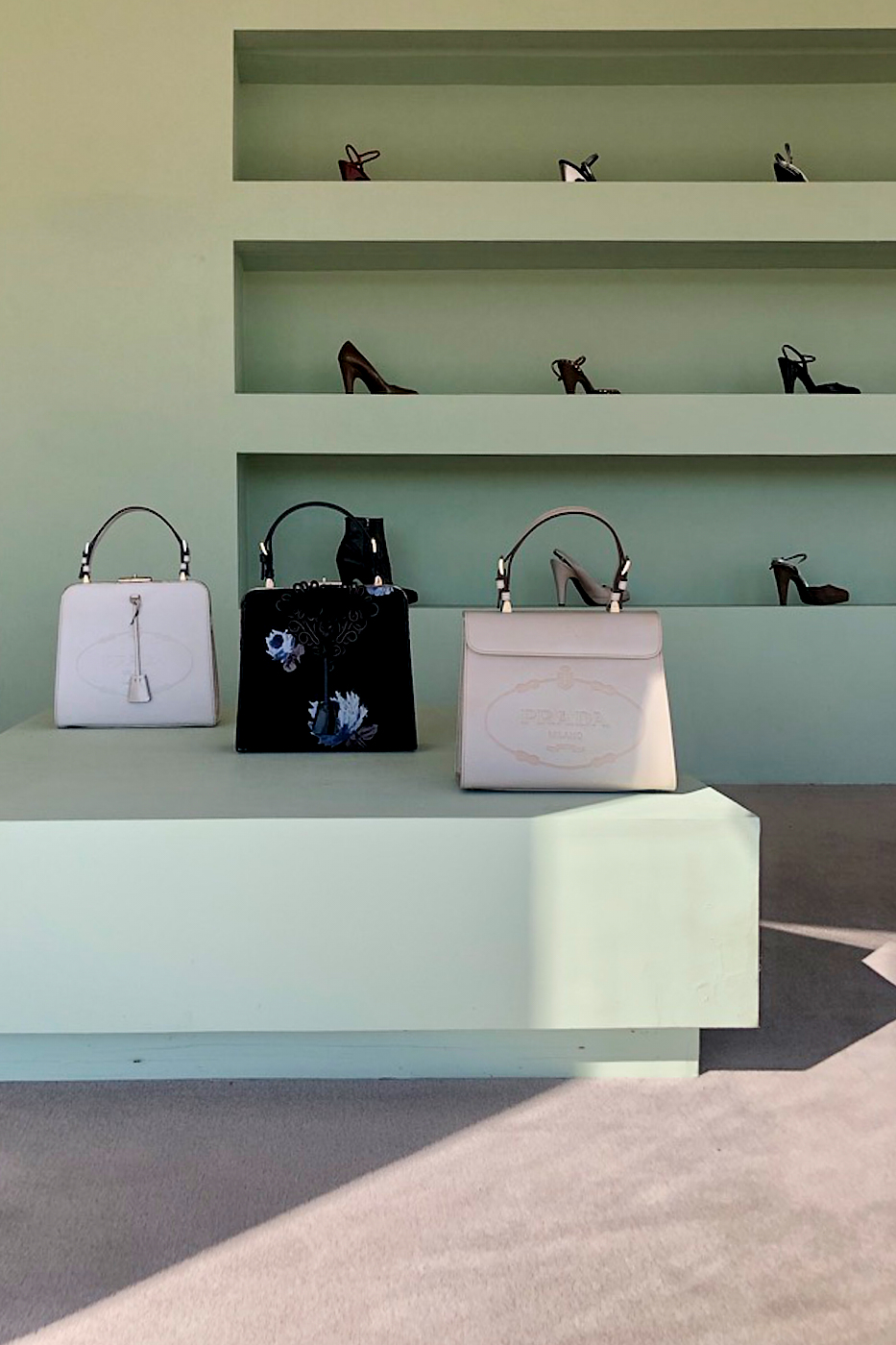 The two images above are both iPhone 8 Plus images to show you what the interior looks like. 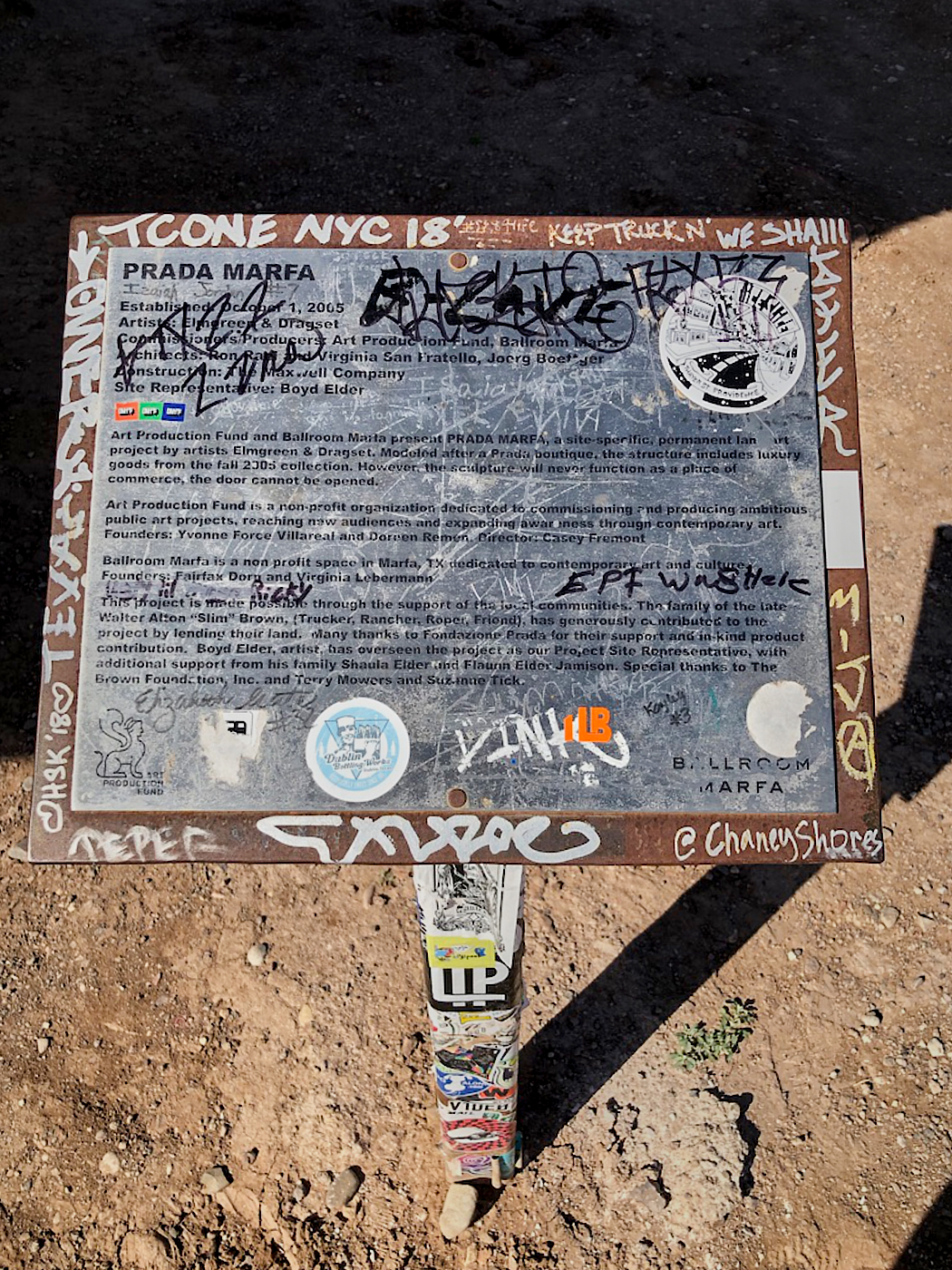 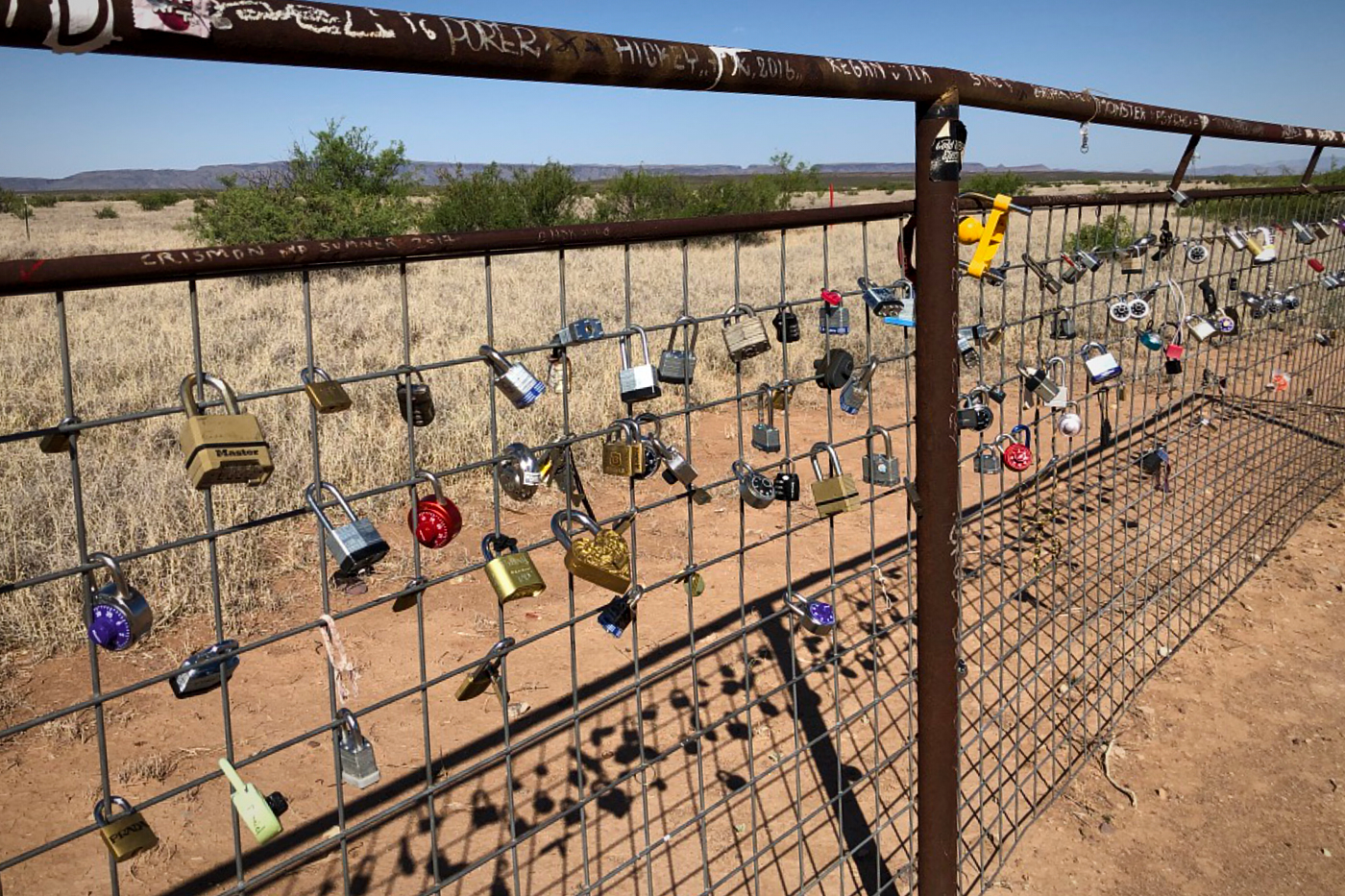 Behind Prada Marfa, you will find a chain link fence fill with a variety of padlocks.  People have placed locks on the fence complete with names, dates and personal mantras.  I did not place a lock on the fence. 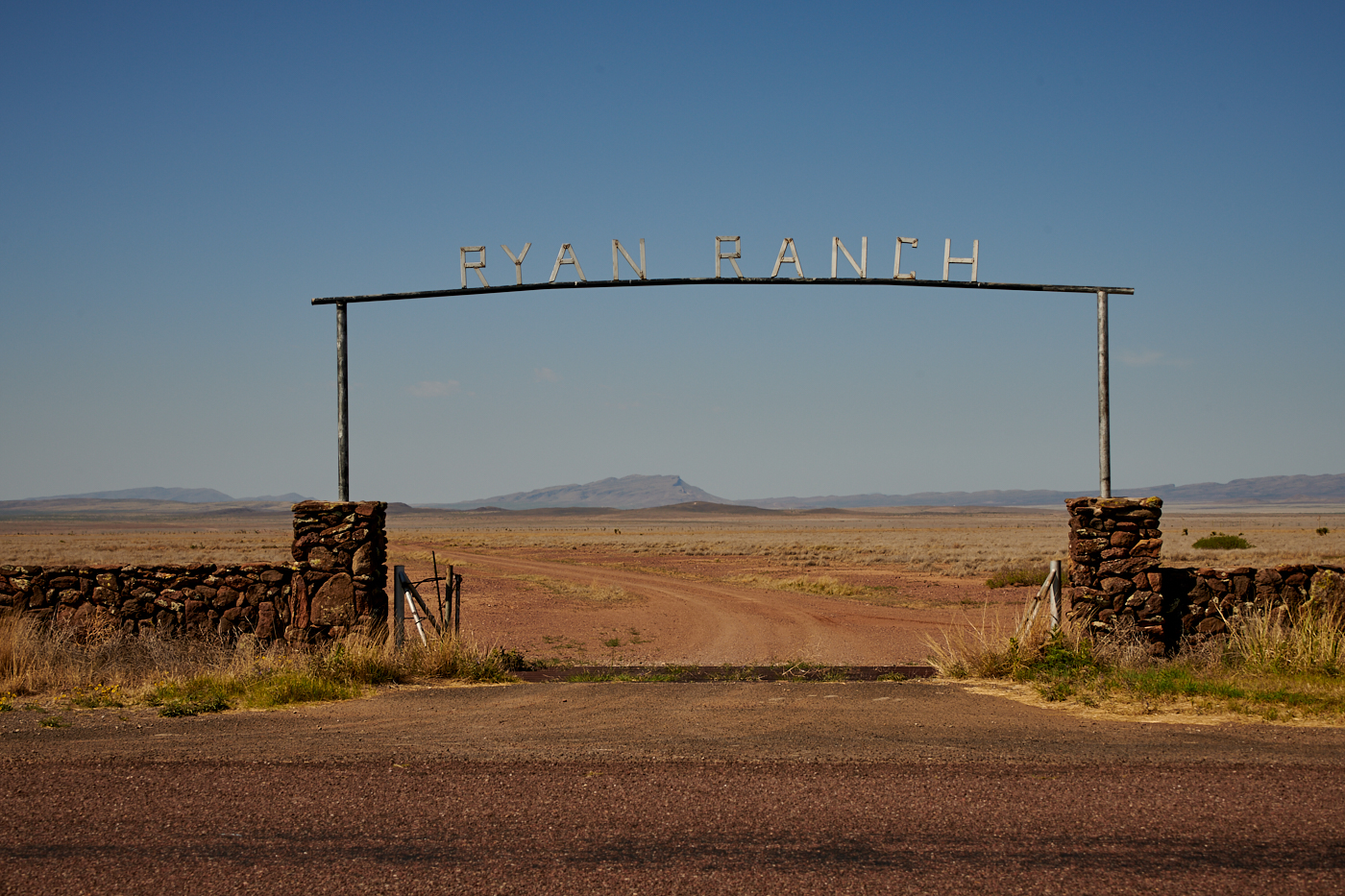 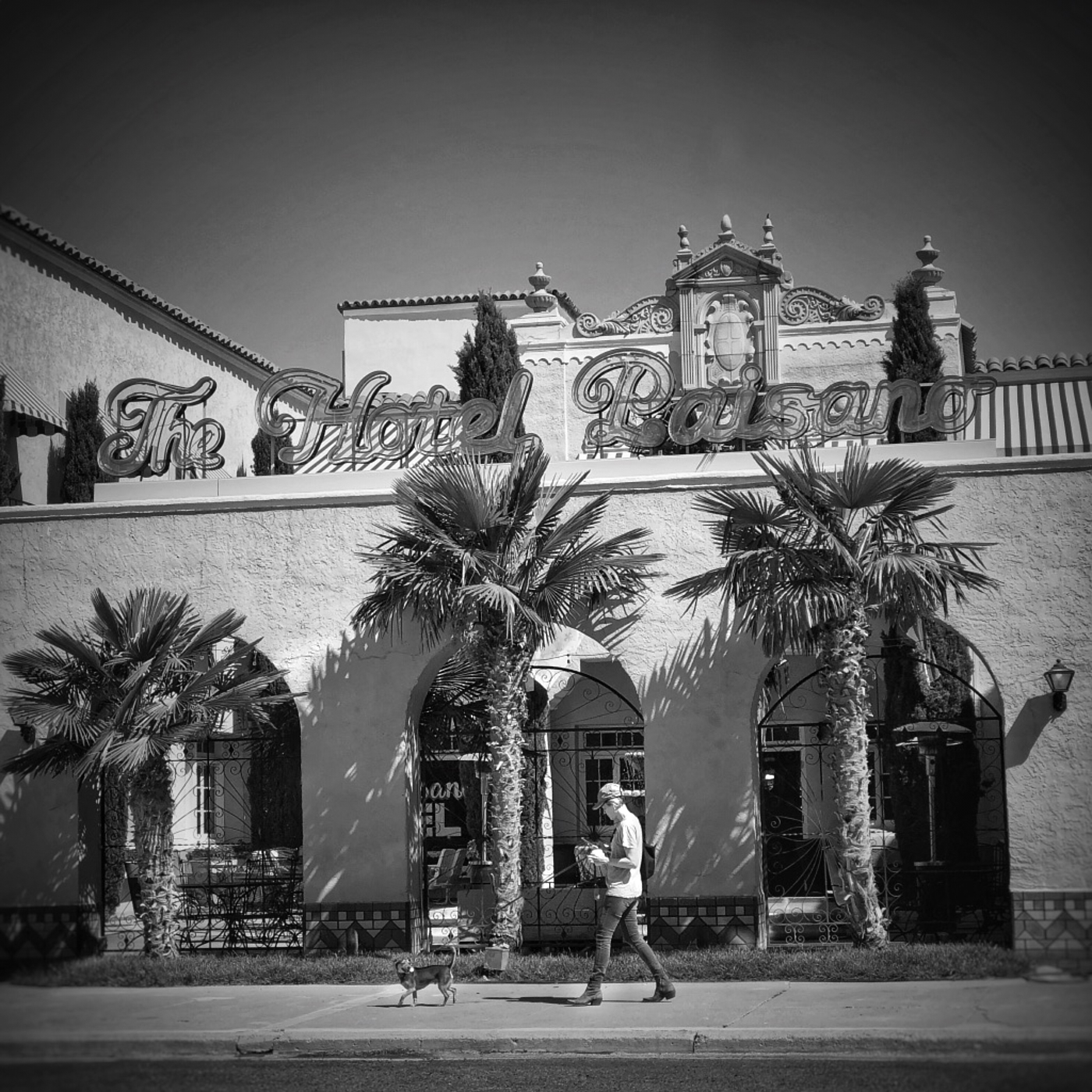 This is an iPhone 8 Plus image of The Hotel Paisano in Marfa, Texas.  This hotel was known as the location headquarters for the cast and crew of the film Giant (1956) for six weeks in the summer of 1955.