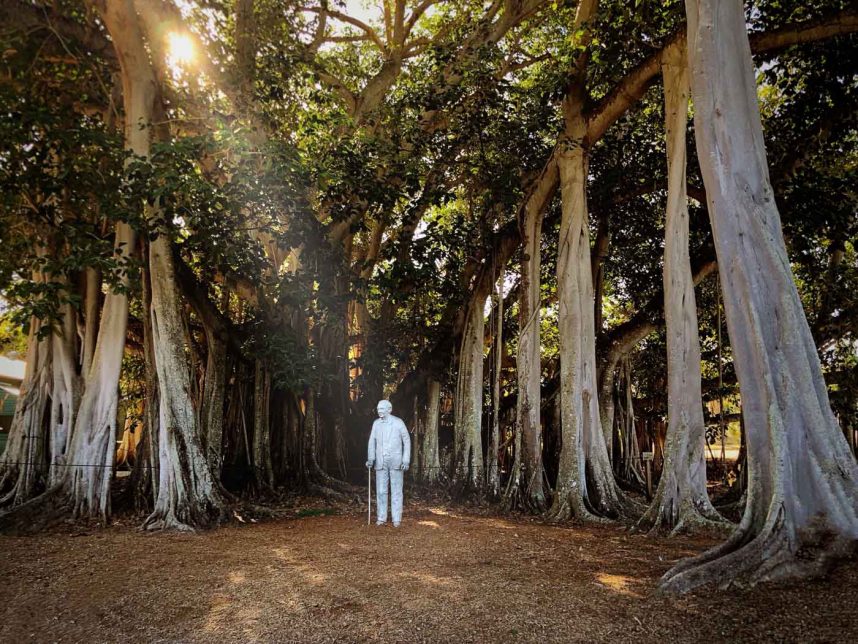 In the city known as The City of Palms - Fort Myers, Florida, you will find the beautifully maintained and historic winter estates of Thomas Edison and Henry Ford. Two highly successful innovators and entrepreneurs who “helped revolutionize civilization in the last century”.

Thanks to Edison and Ford, we are able to light our way in the dark and climb into a car that will take us wherever we like. We are no longer limited to using a horse and buggy, candles, kerosene-oil lamps or gas lights. These inventions and innovations have made our lives much easier and have saved us a great deal of time and effort. However, with the passing of time, it is quite easy to forget that these innovations and creature comforts did not always exist. We are quickly reminded of their importance though when the power goes off for some reason or our car breaks down.

If you need a little help remembering what it was like during the 1920’s, you can visit this National Register Historic site and see what it was like for yourself. Here, you will be able to explore more than 20 acres of historical buildings and gardens, the 1928 Botanical Laboratory and the Edison Ford Inventions Museum. There is so much to see that you could easily spend the entire day there.

During our visit to the winter estates, the things that surprised us the most were the variety and number of botanicals from around the world, the details about Edison and Ford that we learned from Ryan Boyer, the lead site historian; as well as, the number of artifacts in the inventions museum. Now we understand why people who have visited this site are so quick to recommend it.

If you are interested in taking photographs of the exterior of the houses, we would recommend that you arrive early and head over to the houses before you take part in any of the tours as the number of visitors increases throughout the day. This is what we did when we first arrived.

When we were finished taking photos of the houses, we headed over to the main building and signed up for one of the guided tours. Every day of the week you will find historian led guided tours, audio tours in English, German, Spanish and French, museum demonstrations and hands-on science activities. There are also additional tours that are available on select days. You can find out more about these tours online or you can ask about them at the tickets and membership counter in the main building.

So, let us begin our tour of the Edison and Ford Winter Estates in front of the Tickets and Museum Store where you will find the famous Banyan tree.

According to historical documents, “this tree was planted around 1927 and is understood to be one of the largest in the continental United States” with a canopy of almost an acre. This type of tree produces a white milky sap (latex) that can be used to create rubber. This is what Thomas Edison, Henry Ford and Harvey Firestone were working on when they were trying to find a natural source of rubber that could be grown in the United States. “The banyan tree was one of over 17,000 plant samples that were tested for Edison’s rubber research”.  As an inventor and as someone who was always interested in learning, Edison was very methodical and this approach helped him tremendously in his research. 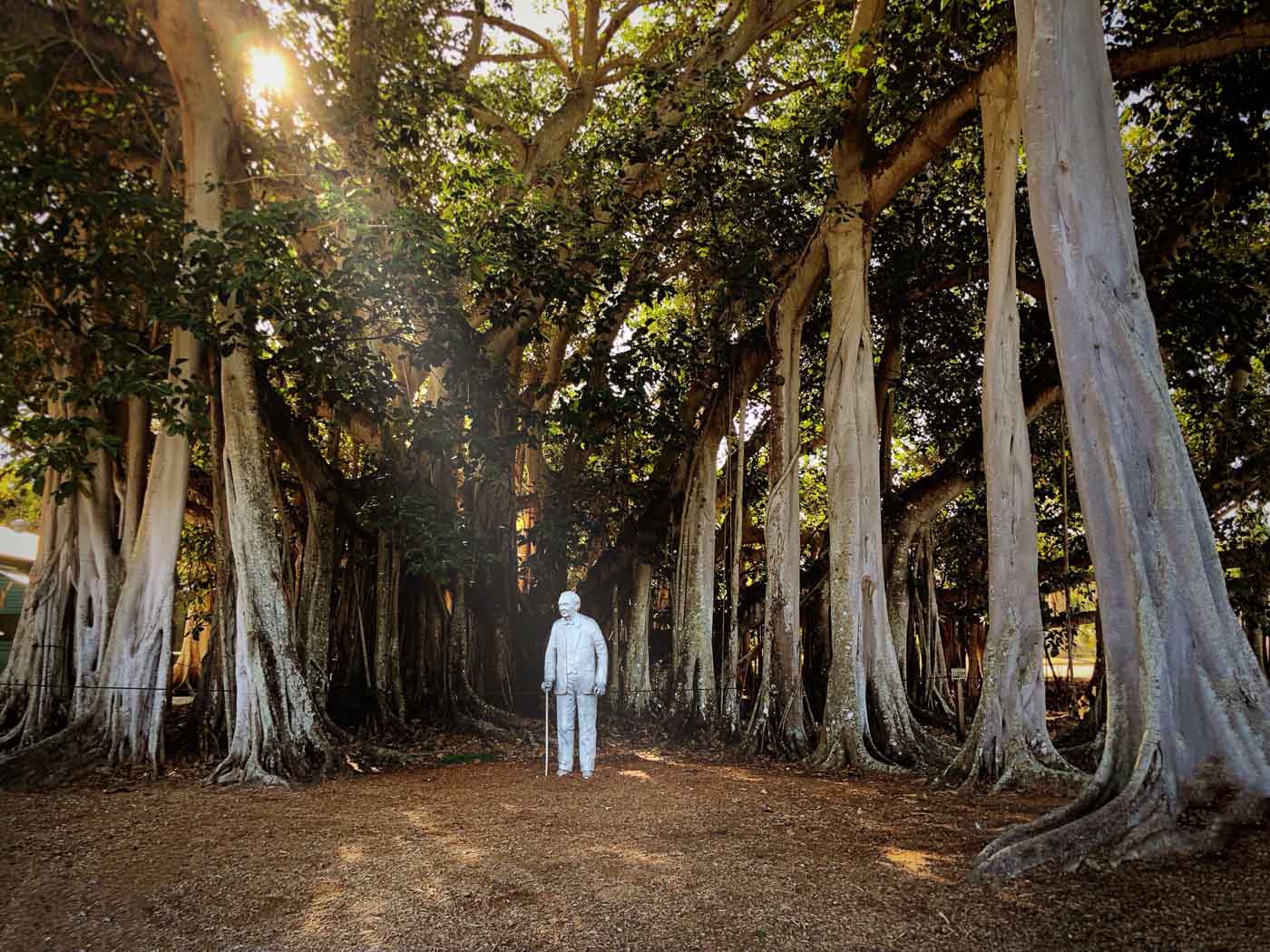 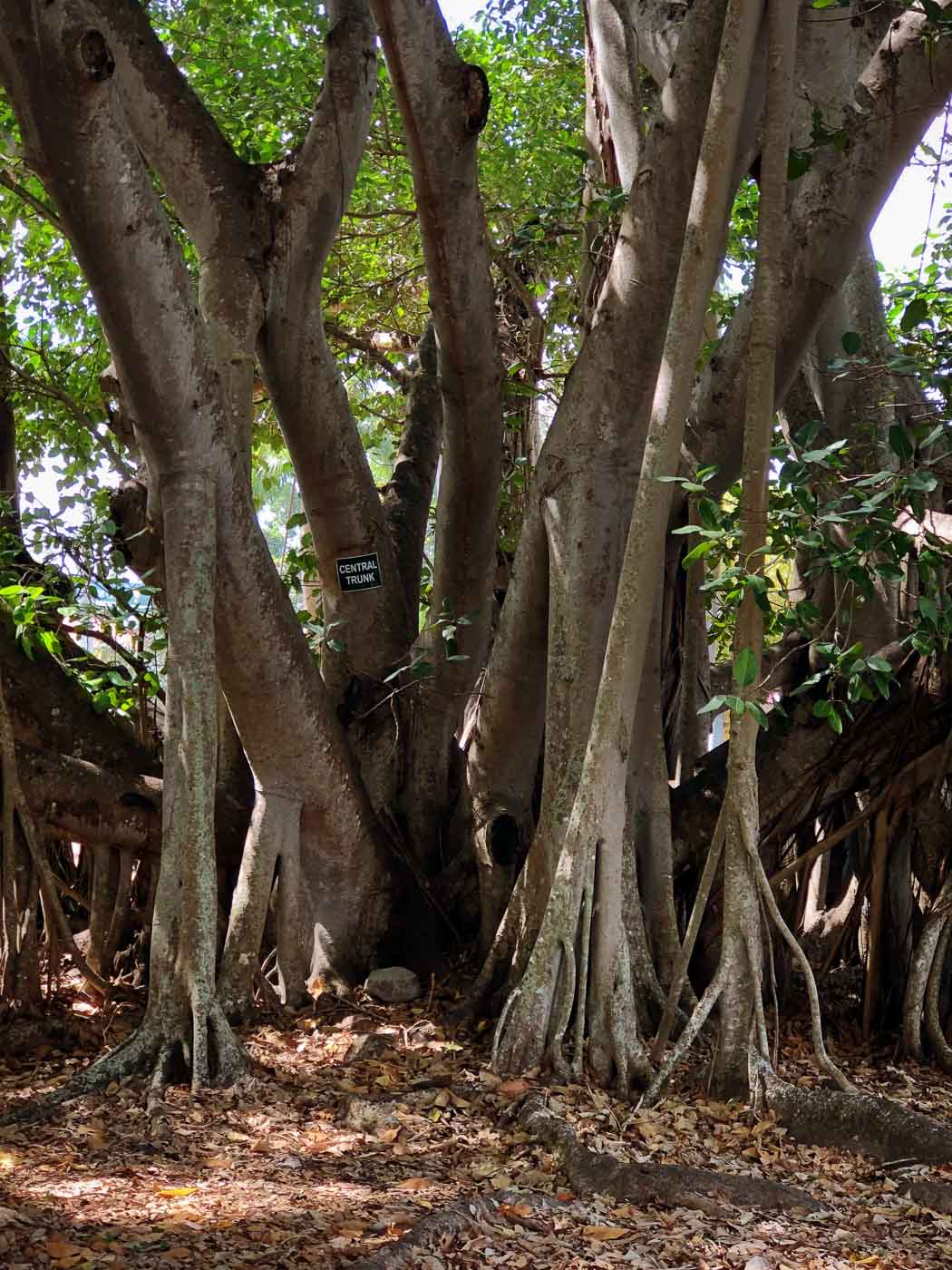 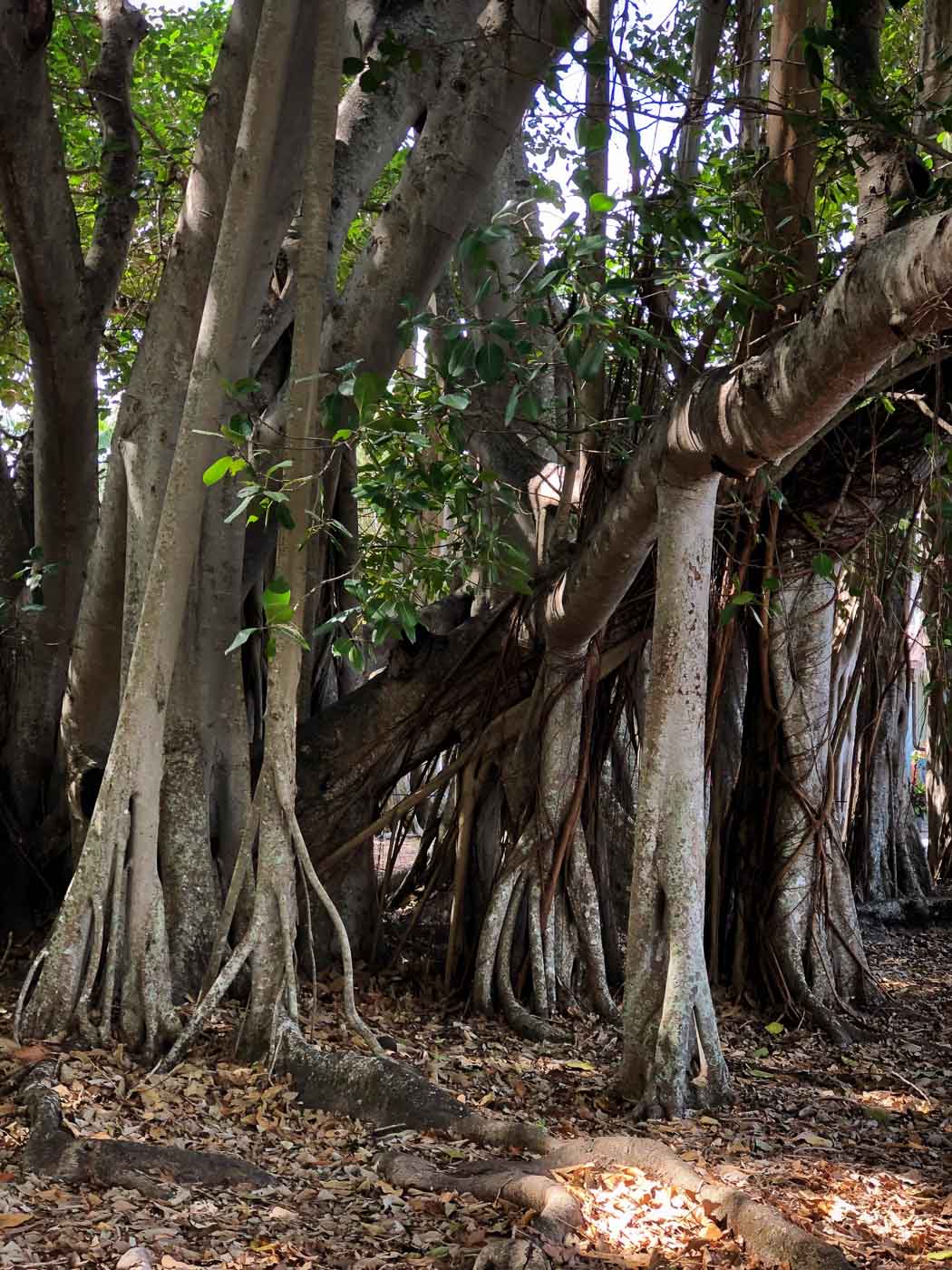 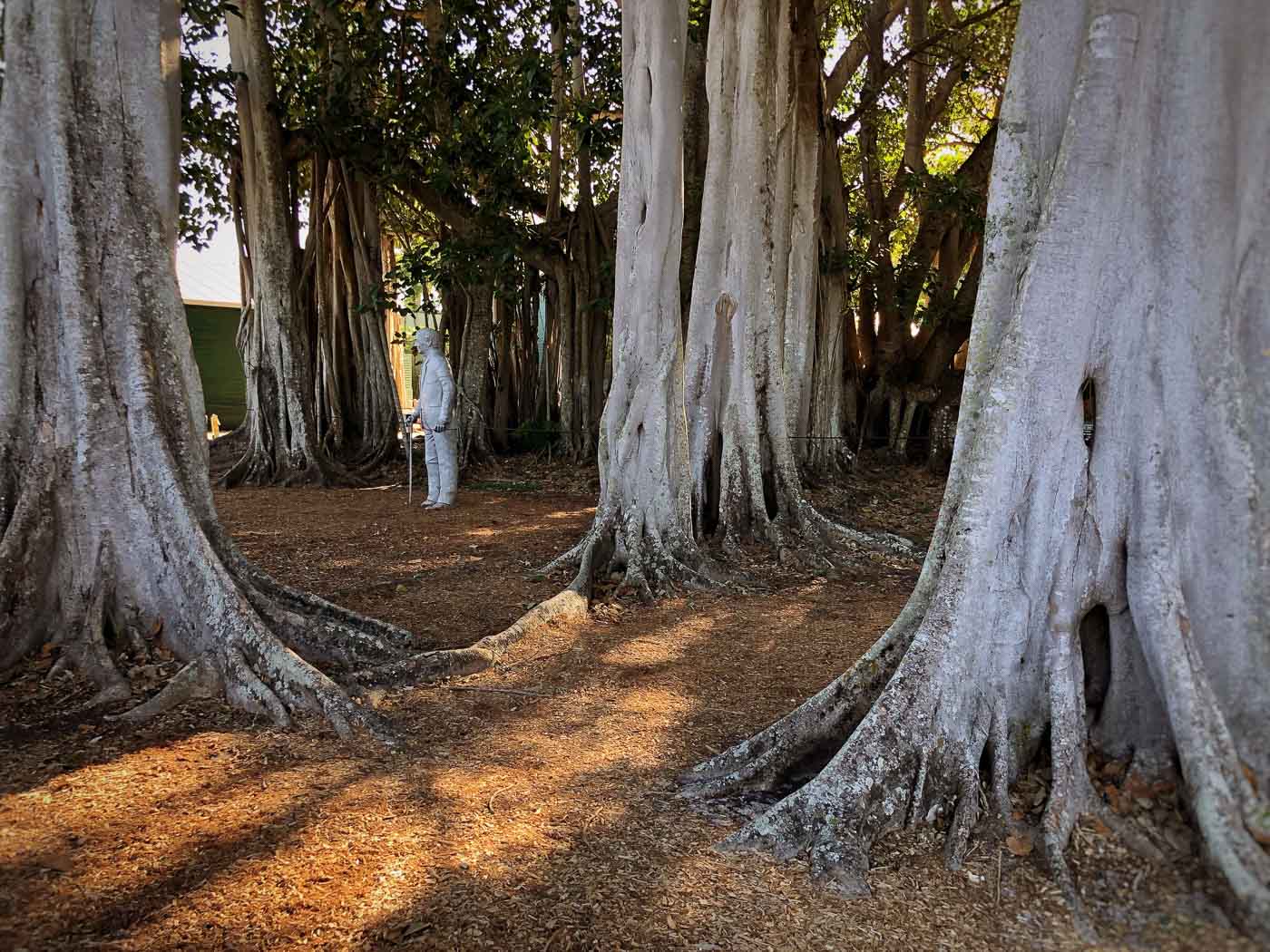 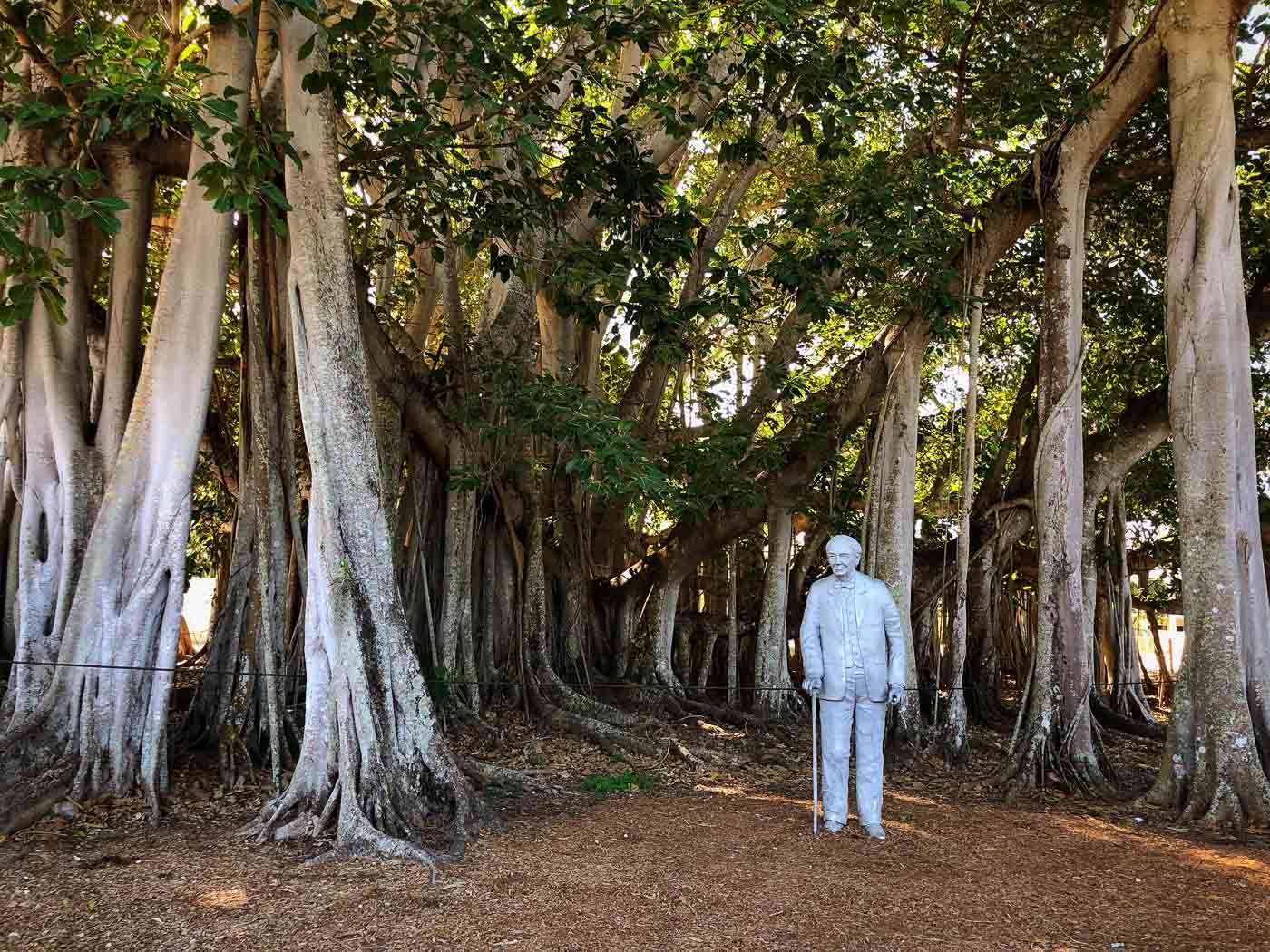 "The Banyan tree is native to South Asia.  The long branches support themselves by producing aerial roots that slowly grow downward into the ground, forming pillar-like roots."  This is another interesting feature about the Banyan tree.  It is quite beautiful.

You will have noticed that there is a sculpture of Thomas Edison amongst the Banyan tree.  This sculpture was created by Don Wilkins and dedicated on February 11, 2005 on the birthday of Thomas Edison.  It is made of cold cast aluminum. 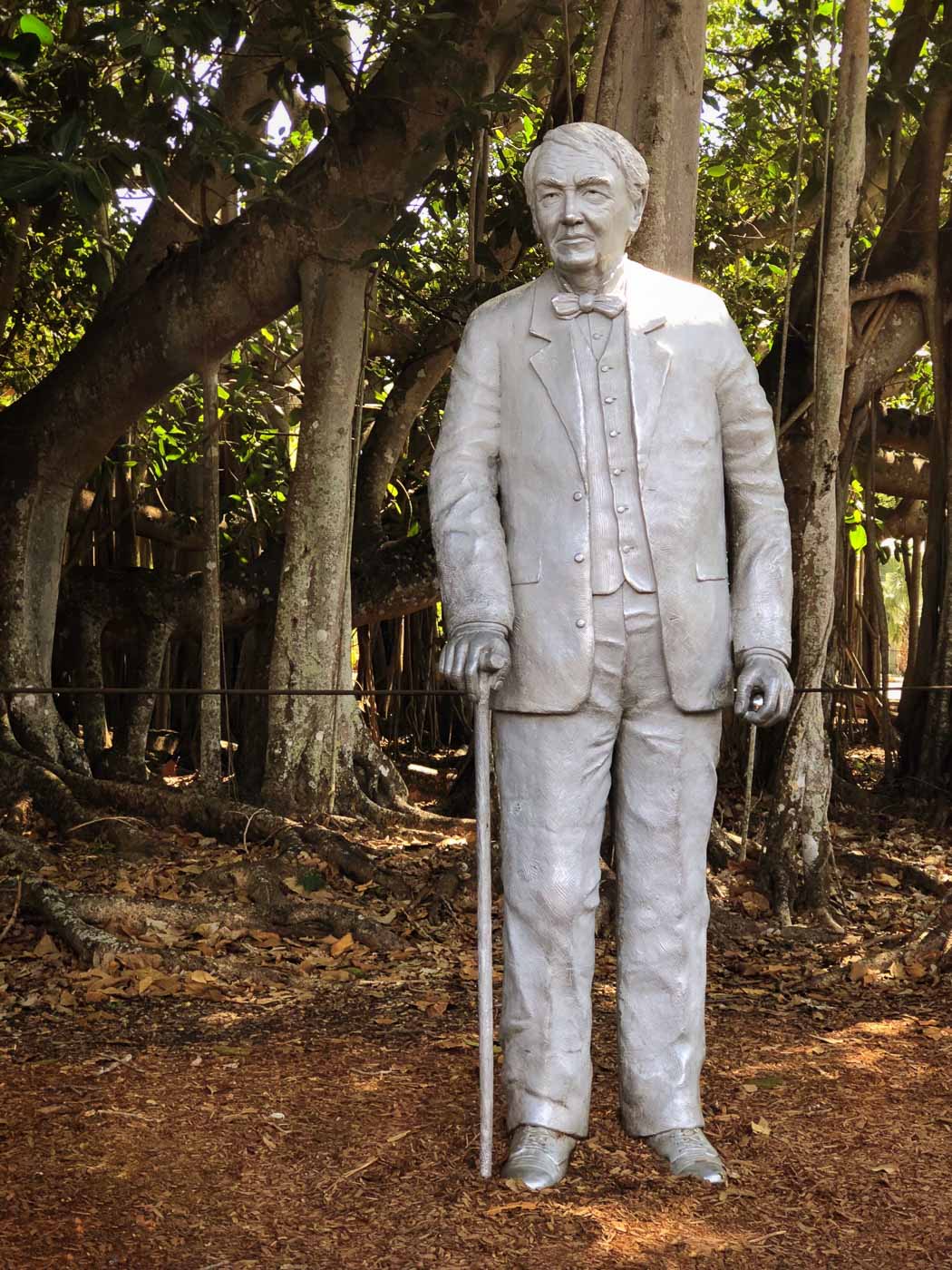 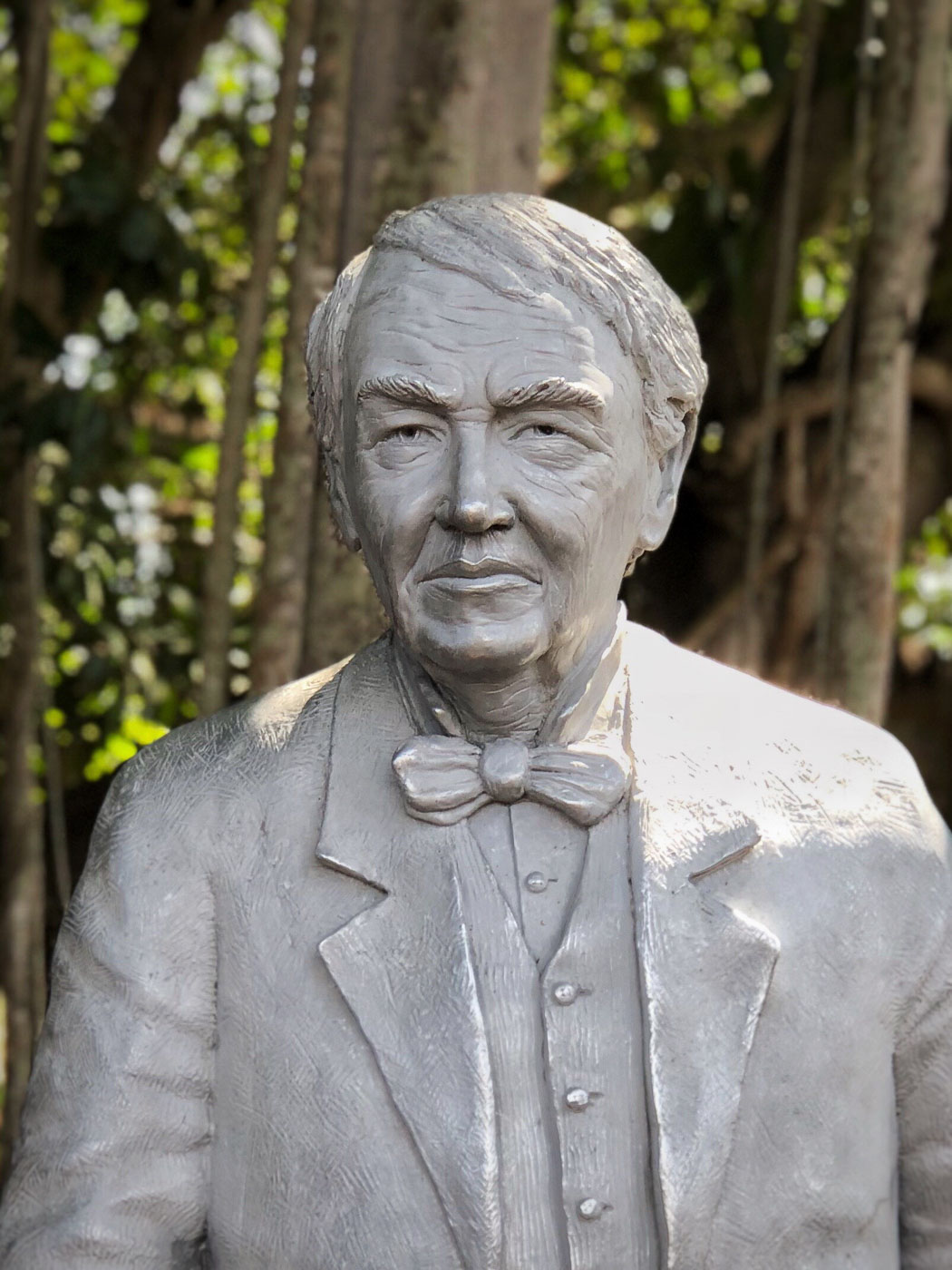 Next, we head to the pool which was built in 1910 and built from Edison Portland Cement.  This pool was one of the first residential pools in Southwest Florida. It was 50 by 20 feet and was 4 to 7  1/2 feet deep.  Not really deep enough for the high diving board.

Later on "as part of the 1928 agreement to move Edison's 1886 Laboratory to Greenfield Village, Henry Ford financed new additions to the Pool Complex, including a Tea House and a larger Bath House." 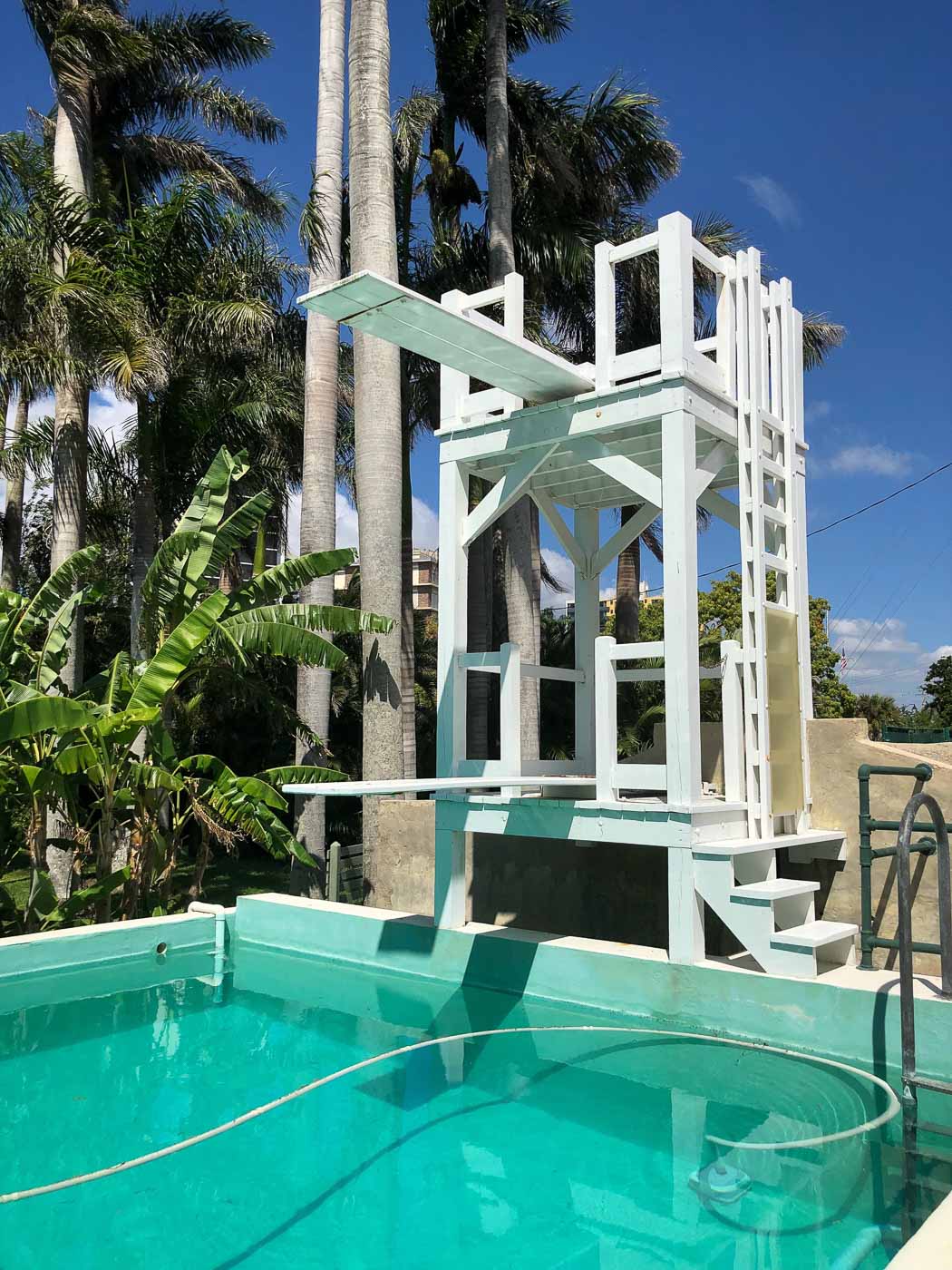 Edison's Study and the Moonlight Garden

In this location, you will find Edison's study and Mrs. Edison's favourite place the Moonlight Garden.

Previously, Edison's original laboratory stood in this location. The laboratory had allowed Edison to continue his experiments while he was in Florida during the winter.  Here he worked on projects involving electrical lighting, telegraphy and underwater communication.

Henry Ford convinced Edison to move his laboratory to his museum Greenfield Village in Dearborn, Michigan where it would be preserved at this living history museum.

In exchange, Ford financed the construction of Edison's Study and the Moonlight garden as well as improvements to the Pool Complex.

Edison now had a quiet place to himself and to meet with the media during his annual birthday interview in February.  Mrs. Edison had a beautiful garden designed with white and blue fragrant flowers and a small pool to reflect the moonlight. 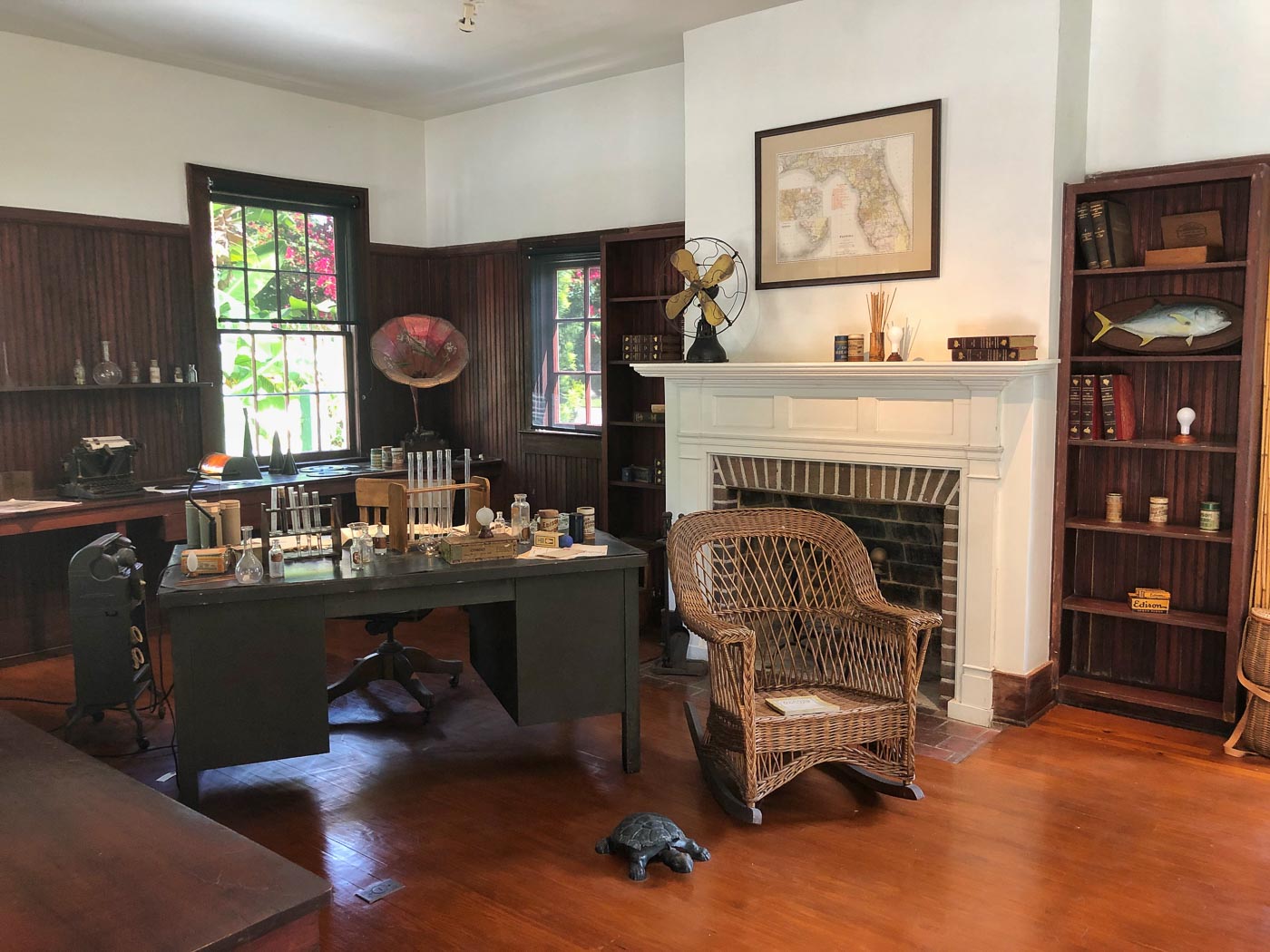 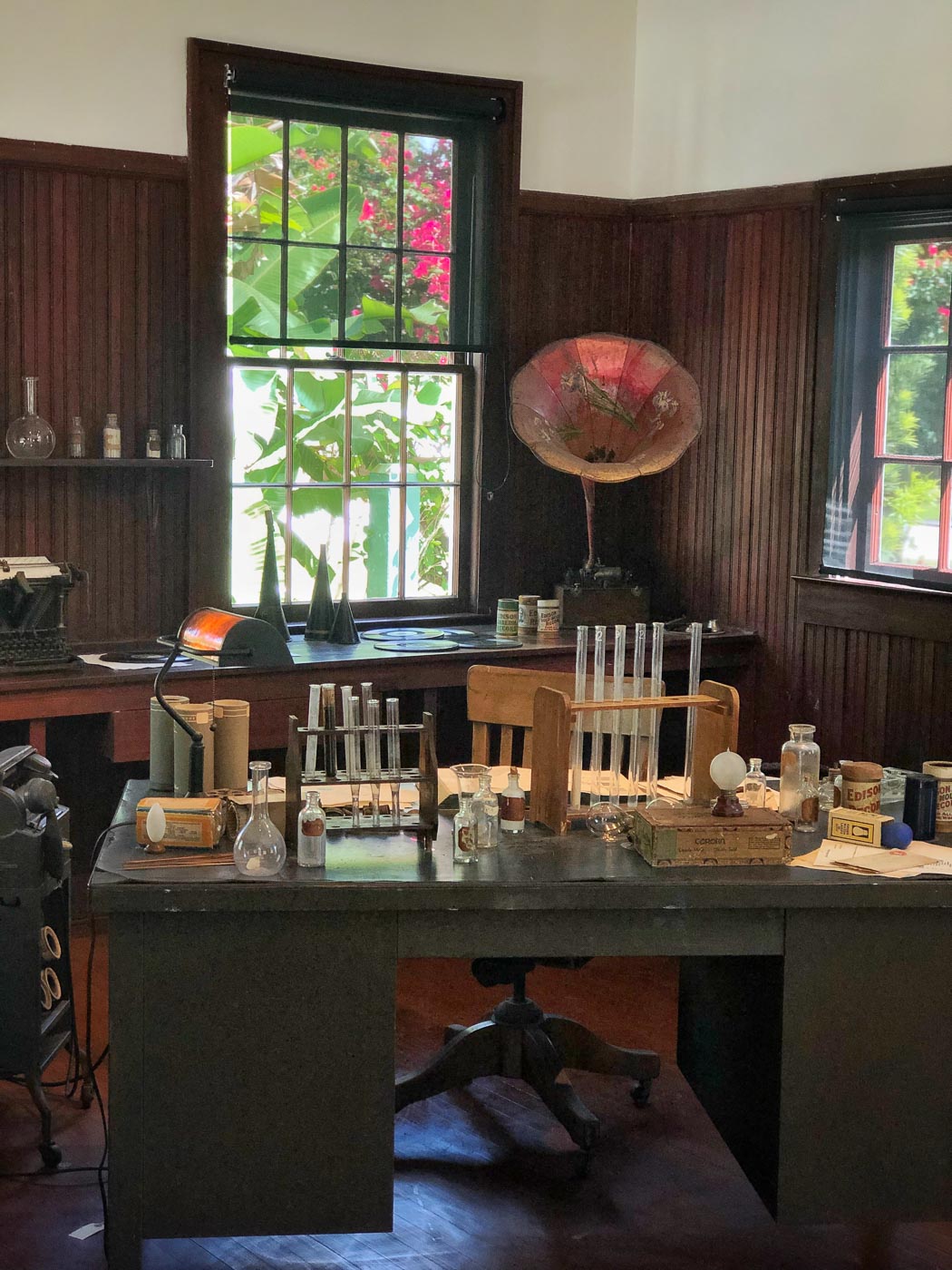 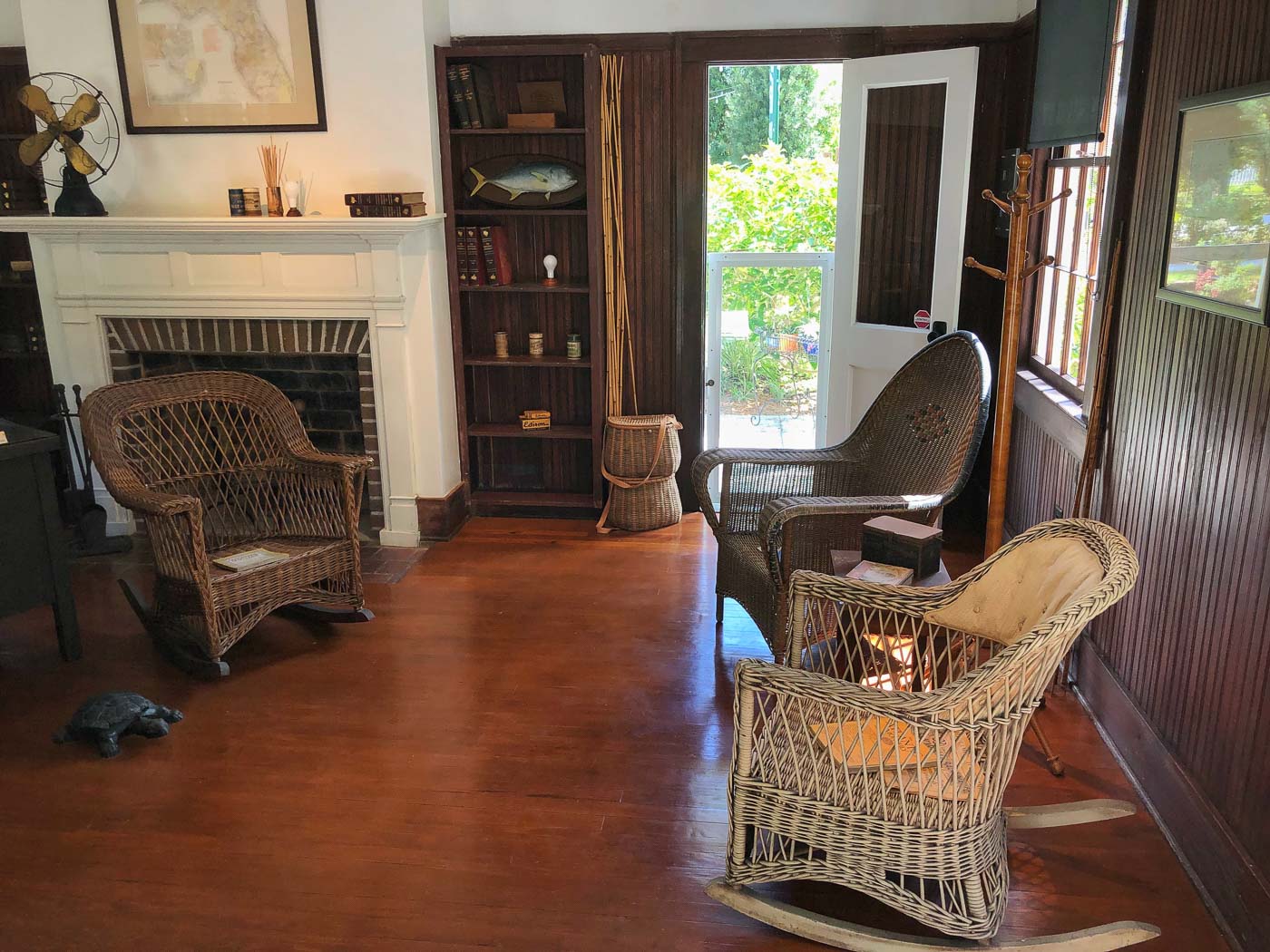 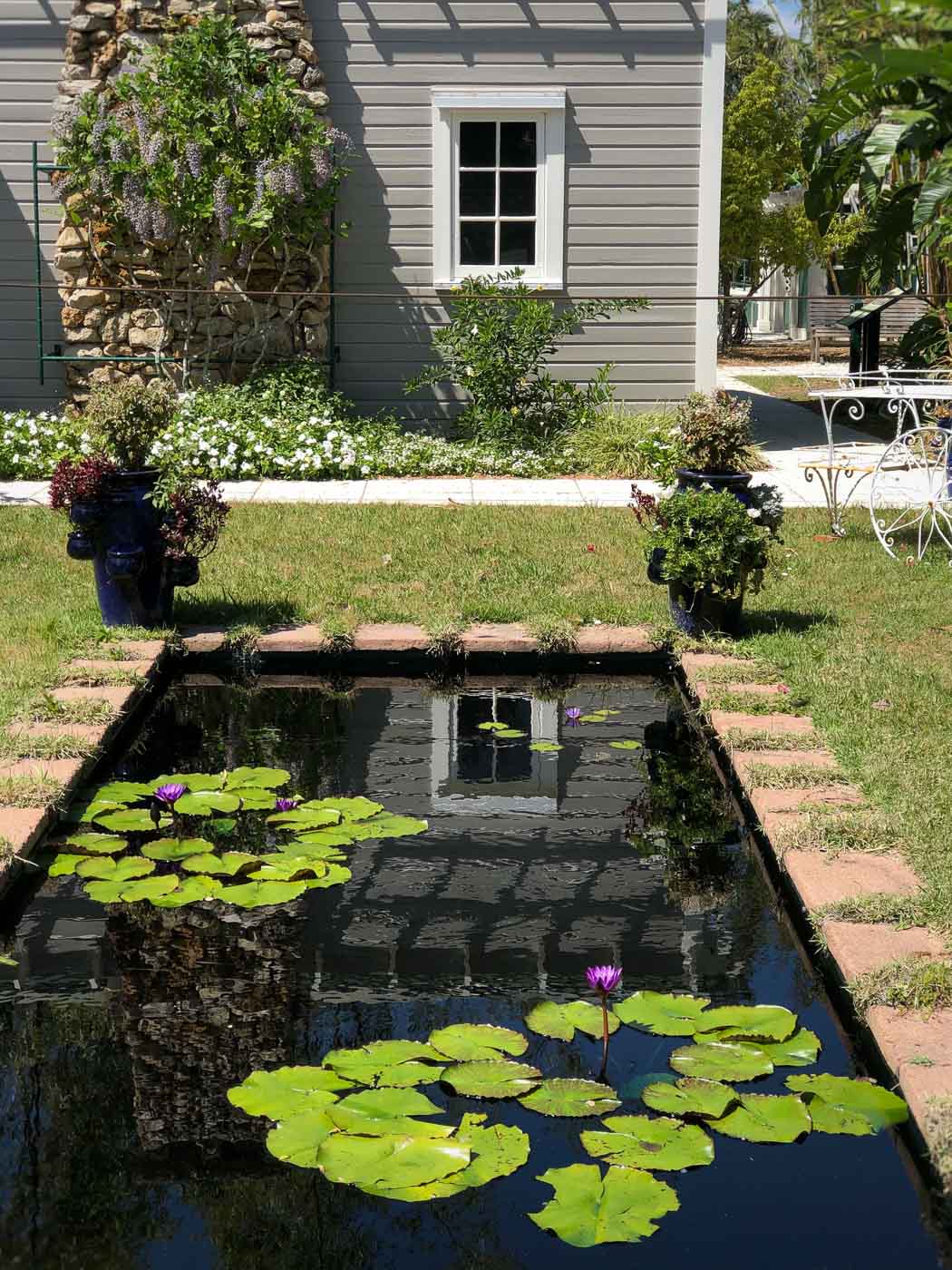 The Caretaker's House is the oldest structure at the Edison estate and was here when Edison first purchased the property.  The building had previously been used by cattlemen as they drove their herds south for shipment.

The oldest part of this building (the middle section) is one of the oldest buildings in the City of Fort Myers.  Edison expanded this building by adding a kitchen, garage and chauffeur's quarters.  His caretakers lived in this building year round.

"Edison relied on local help, as well as staff sent from his main home in West Orange, New Jersey to maintain the Estates.  Staff was an integral part of the property, corresponding frequently with Mr. and Mrs. Edison about activities in Fort Myers.  Staff positions included general agents, caretakers, gardeners, cooks and drivers."

Inside the caretaker's house you will find various displays regarding Edison and Ford. 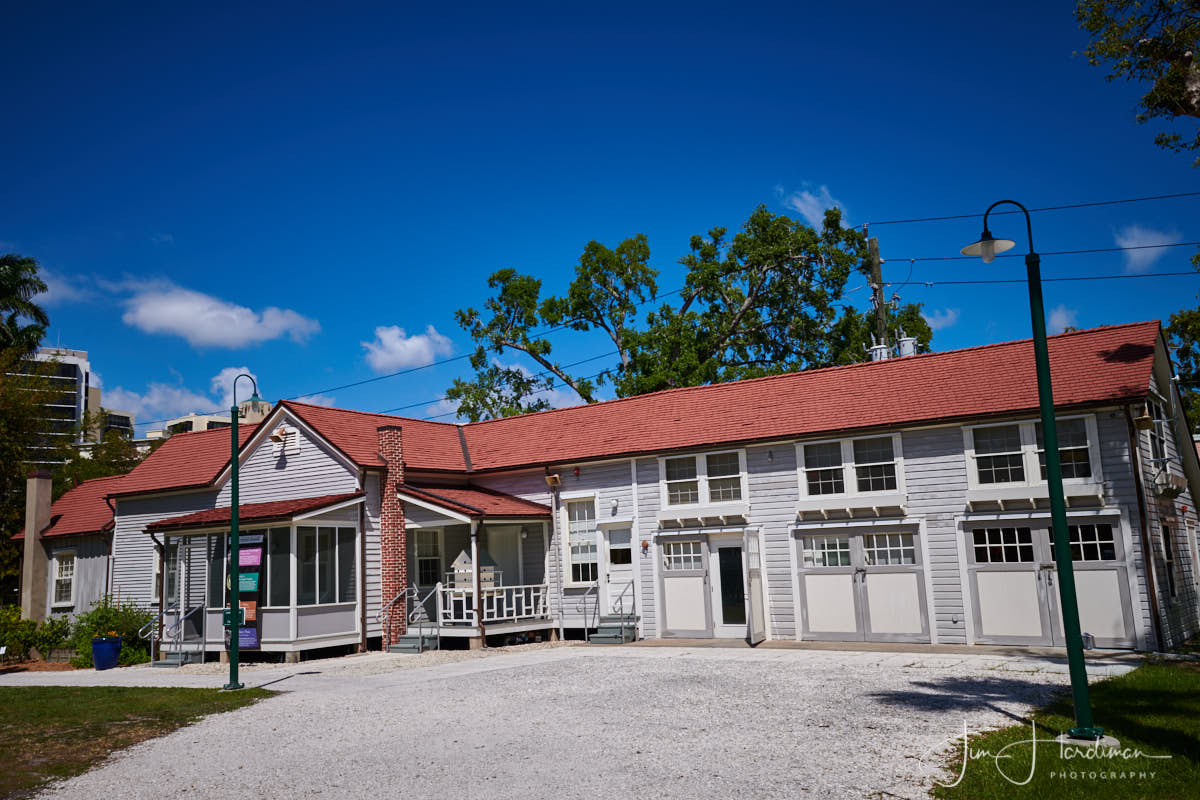 At the time, Edison was looking for a getaway that was isolated but had enough amenities, good climate, plenty of fish and game and beautiful surroundings.

Edison's wife, Mary Stilwell, had passed away the year before and he was looking for a new winter location for himself and his children (Marion, Thomas Jr. and William).

Edison was eager to escape the cold winters at his New Jersey home and he liked to spend time fishing, boating, shelling, bird watching and camping during that time with his family and friends.

Thomas liked the location along the Caloosatachee River and purchased 13 acres for $2,750.  Right away, Edison had a home built for himself, an identical home for Gilliland, and an electrical laboratory.  This well-equipped laboratory allowed Edison to carry on his experiments even as he would take a break from business and other matters.

Architect Alden Frink of Boston helped Edison design this Queen Anne style home.  The materials were pre-cut in Maine, shipped to Fort Myers by boat, and within four months, both homes were completed.

In 1886, Edison married his second wife, Mina Miller and they spent their honeymoon at Seminole Lodge.

“Early in 1887, Edison returning from the North, immediately went to work putting an electric light plant into operation. The lights at Seminole Lodge, as Edison called his estate, were turned on for the first time on Saturday night, March 27, 1887, a history-making event for Fort Myers.  Almost everyone in town strolled out to Edison’s home that evening to observe the miracle of invention.” Edison had electricity, 11 years before the city had their own.

It was also during this year that Edison and Ezra had a falling out when Gilliland backstabbed Edison over a business dealing.  Edison was so bitter that he severed ties with Gilliland and avoided Fort Myers for 13 years. Edison and Mina left the Spring of 1887 and did not return until 1901.

In 1906, Edison purchased the property next door that used to belong to Gilliland and converted it to a guest house. 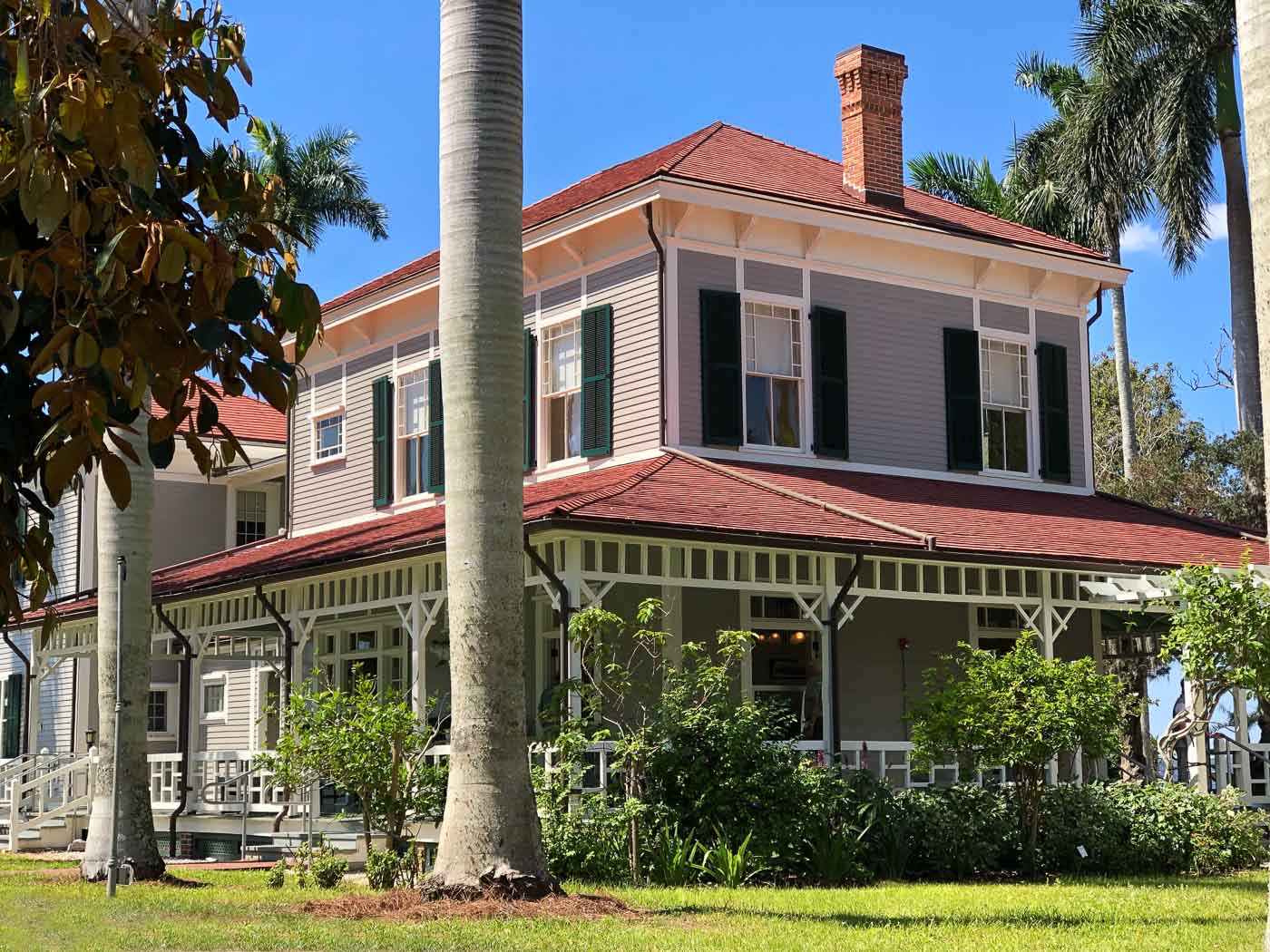 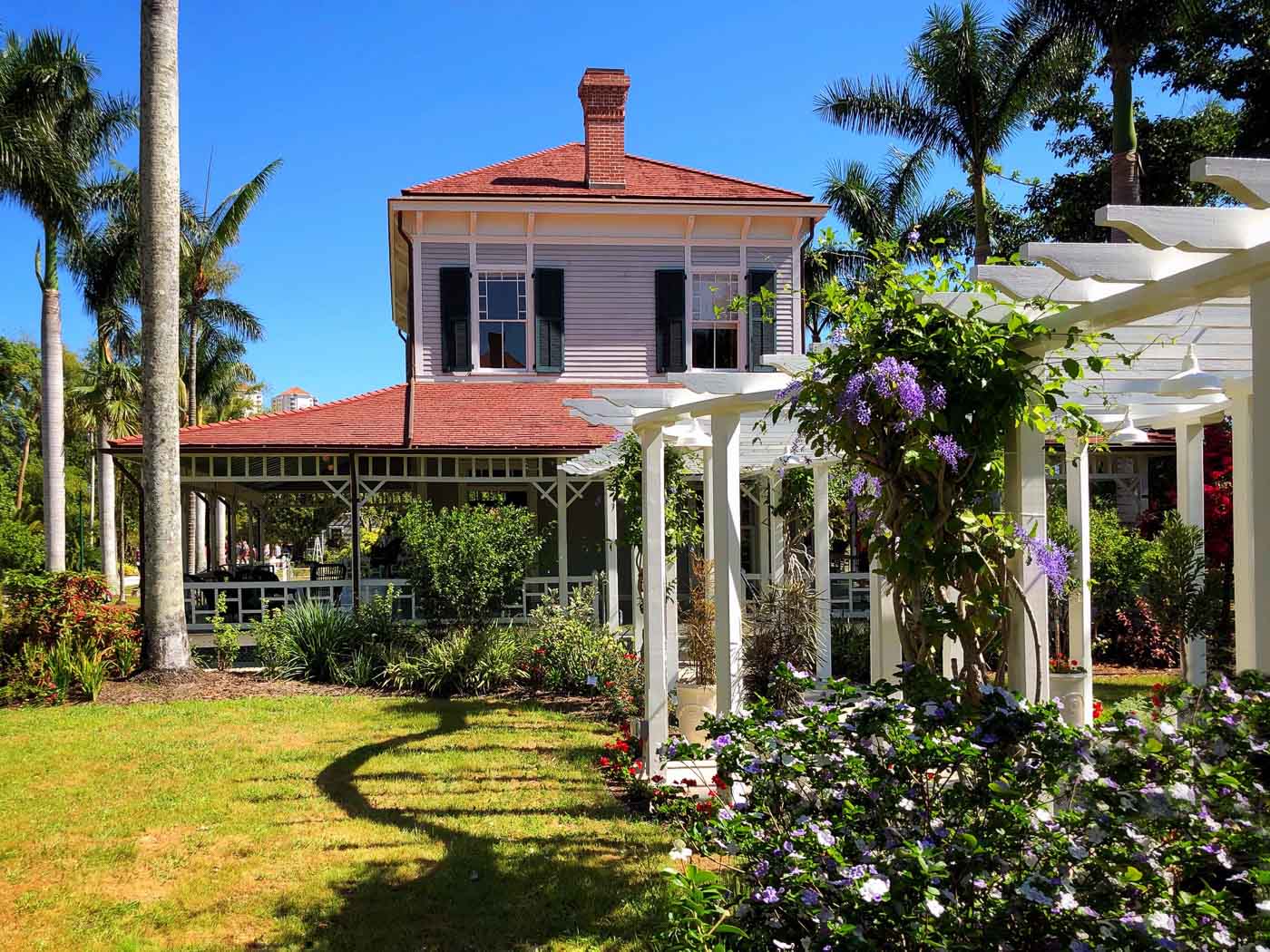 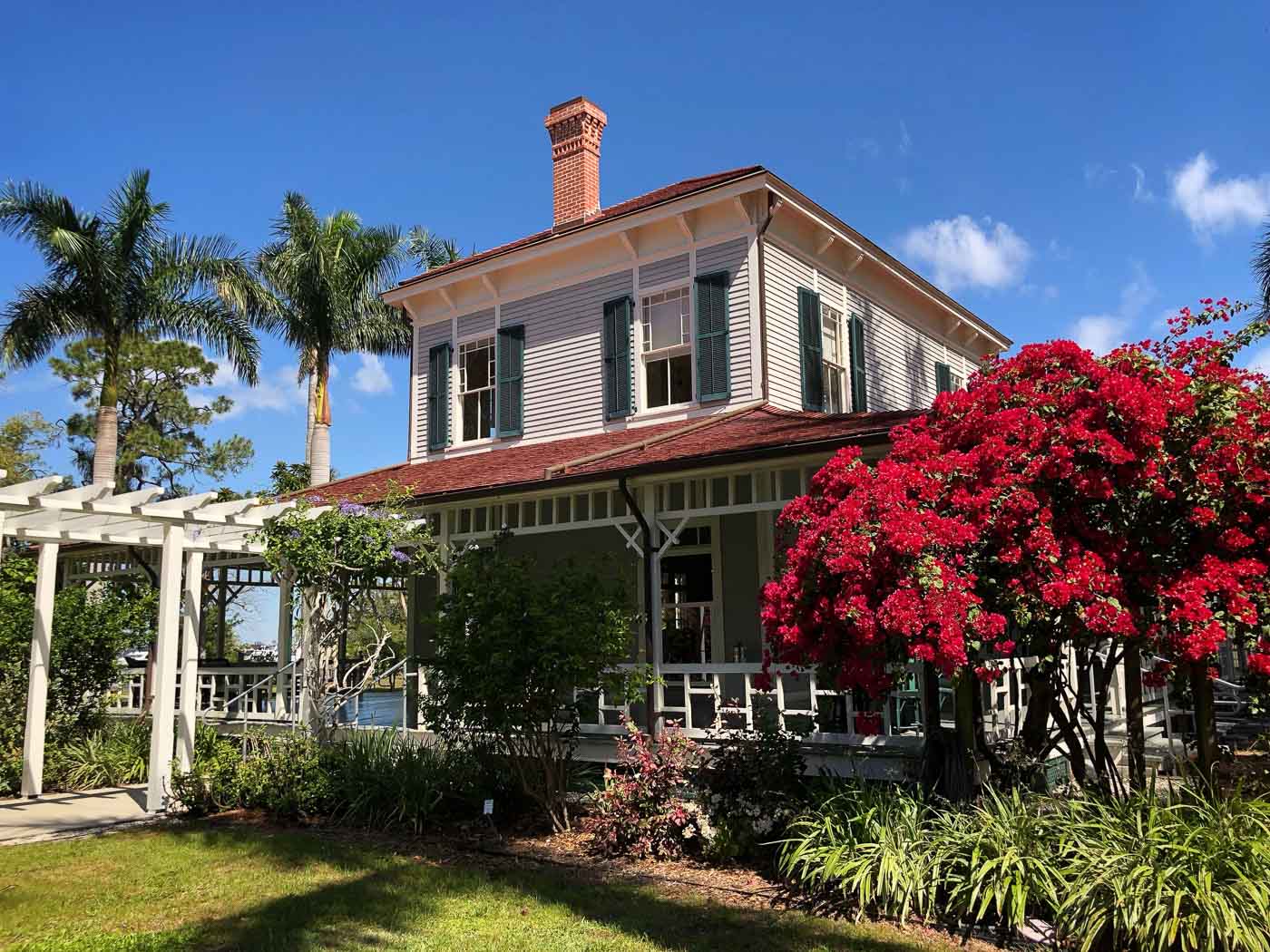 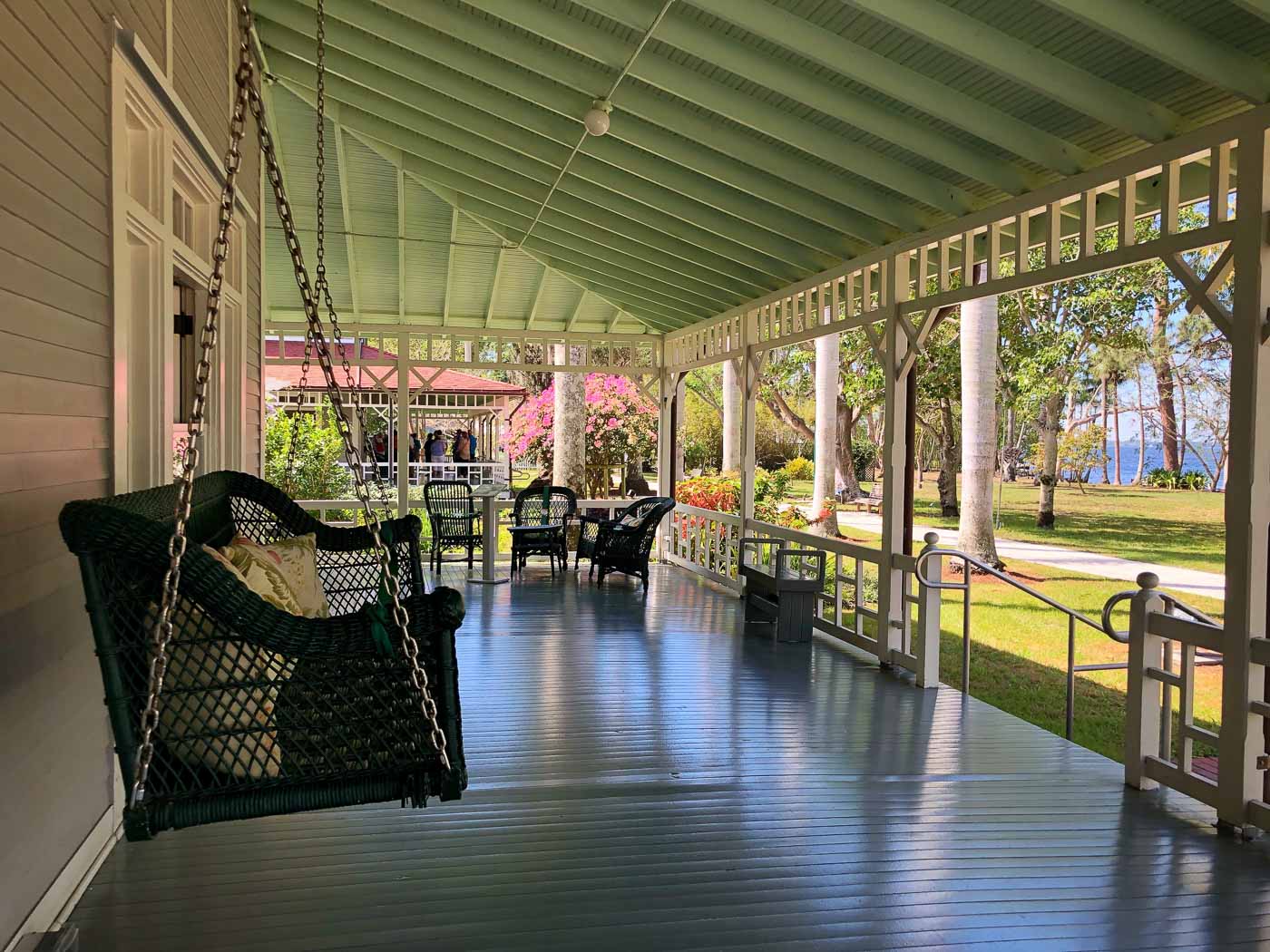 Below, is an image of Edison and Mina's master bedroom in the main house. Before they purchased the guest house, this was the location of the kitchen. Today, all the furnishings in Seminole Lodge that belonged to the Edison family are on permanent loan from the Charles Edison Fund.

Included in the master bedroom suite is a sit-in electric sauna. Once you were inside the sauna and closed the doors, you could switch on electric light bulbs and immerse yourself in a "light bath." 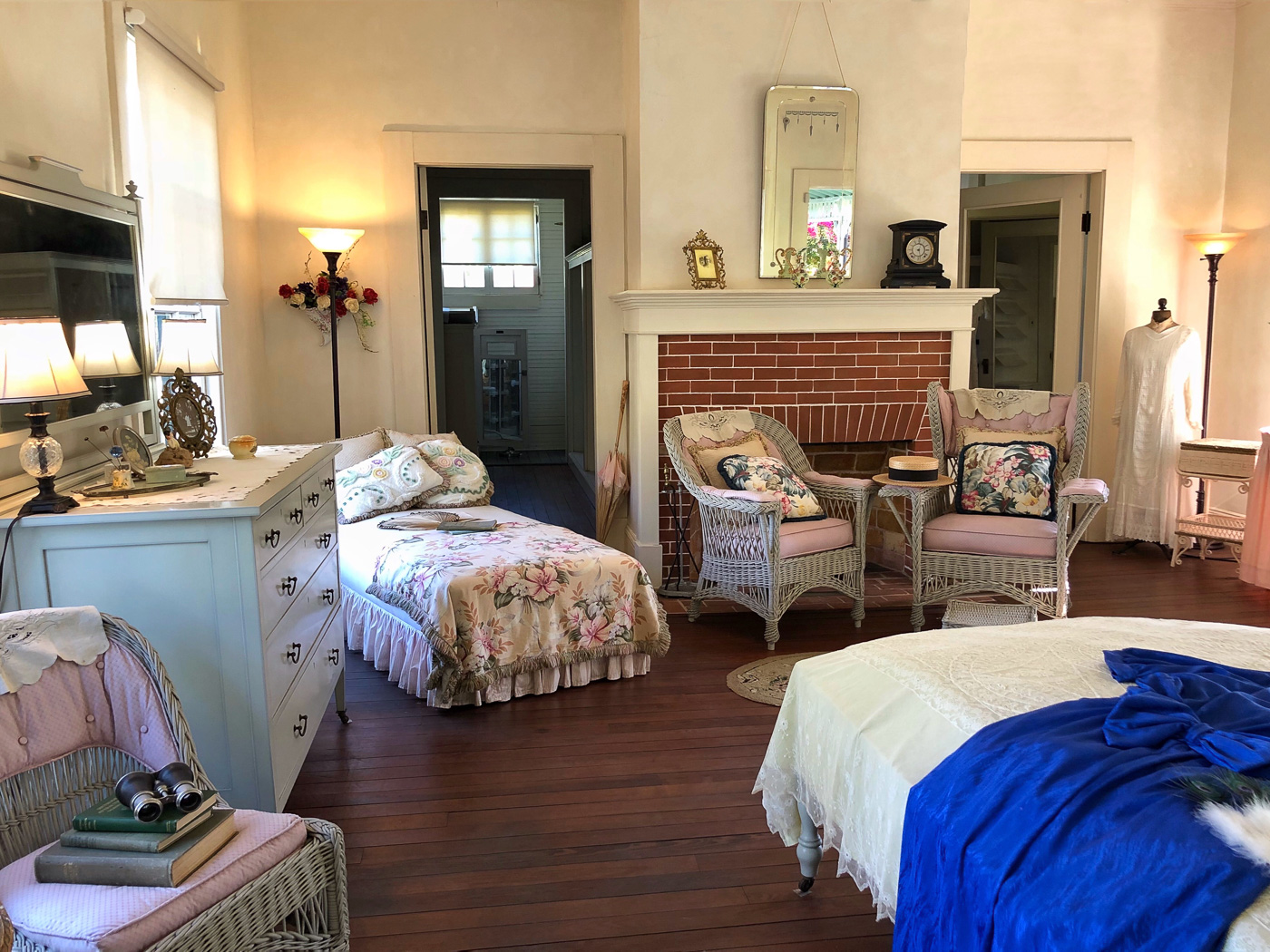 In the main house, you will find newspapers, technical drawings and books crowding Edison's desk in the library.  Edison had around 1,000 books in his library at Seminole Lodge. 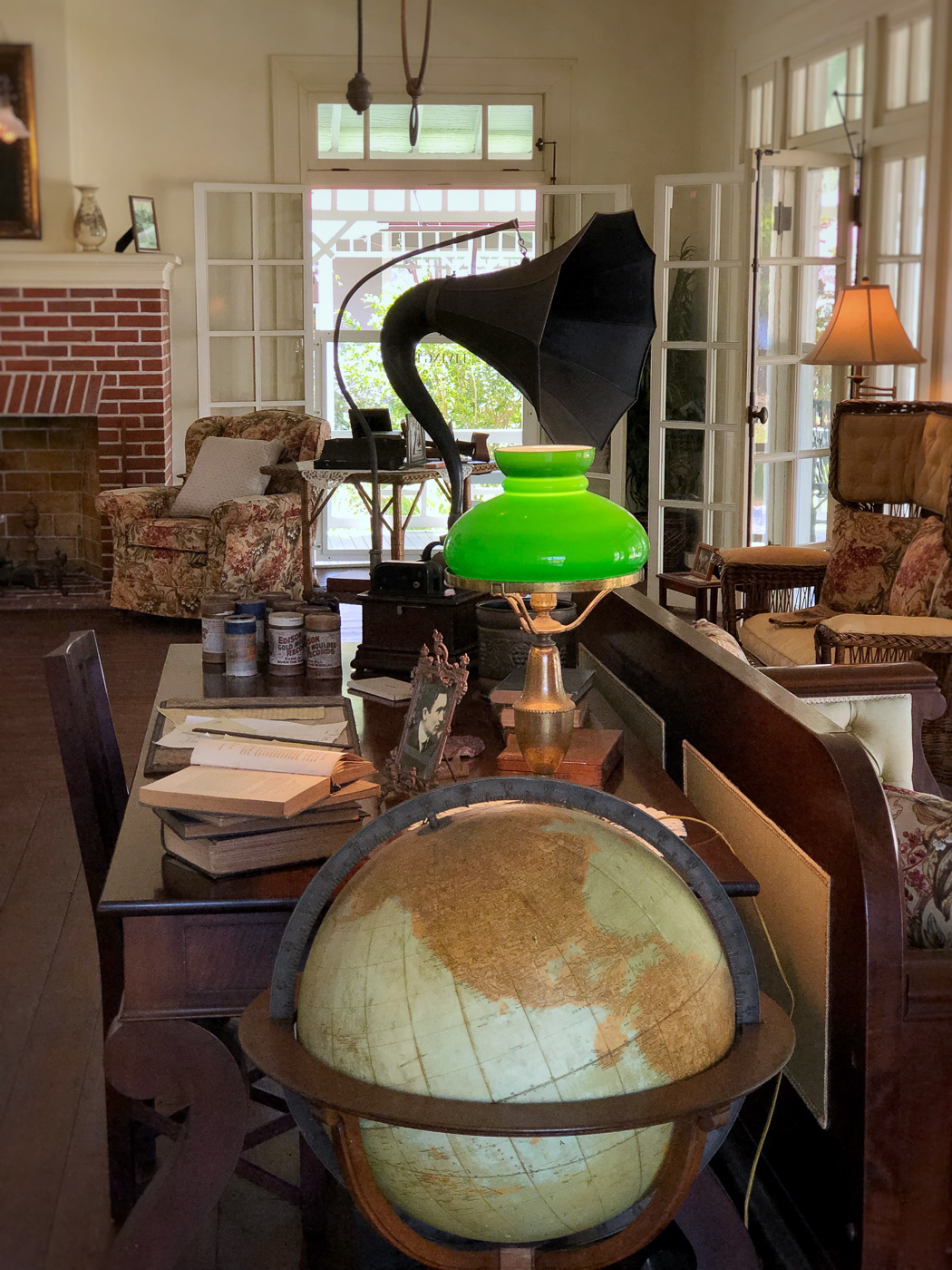 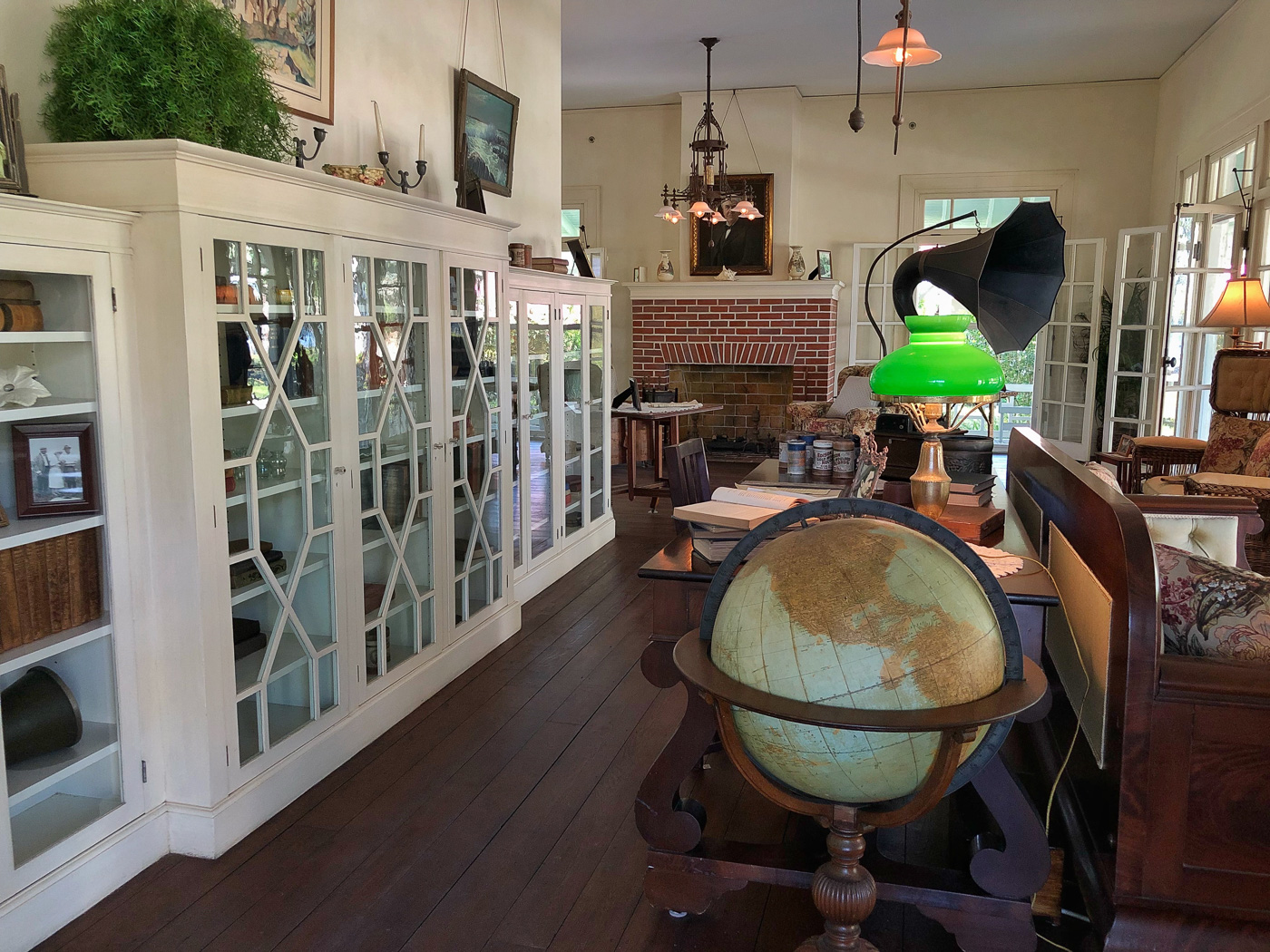 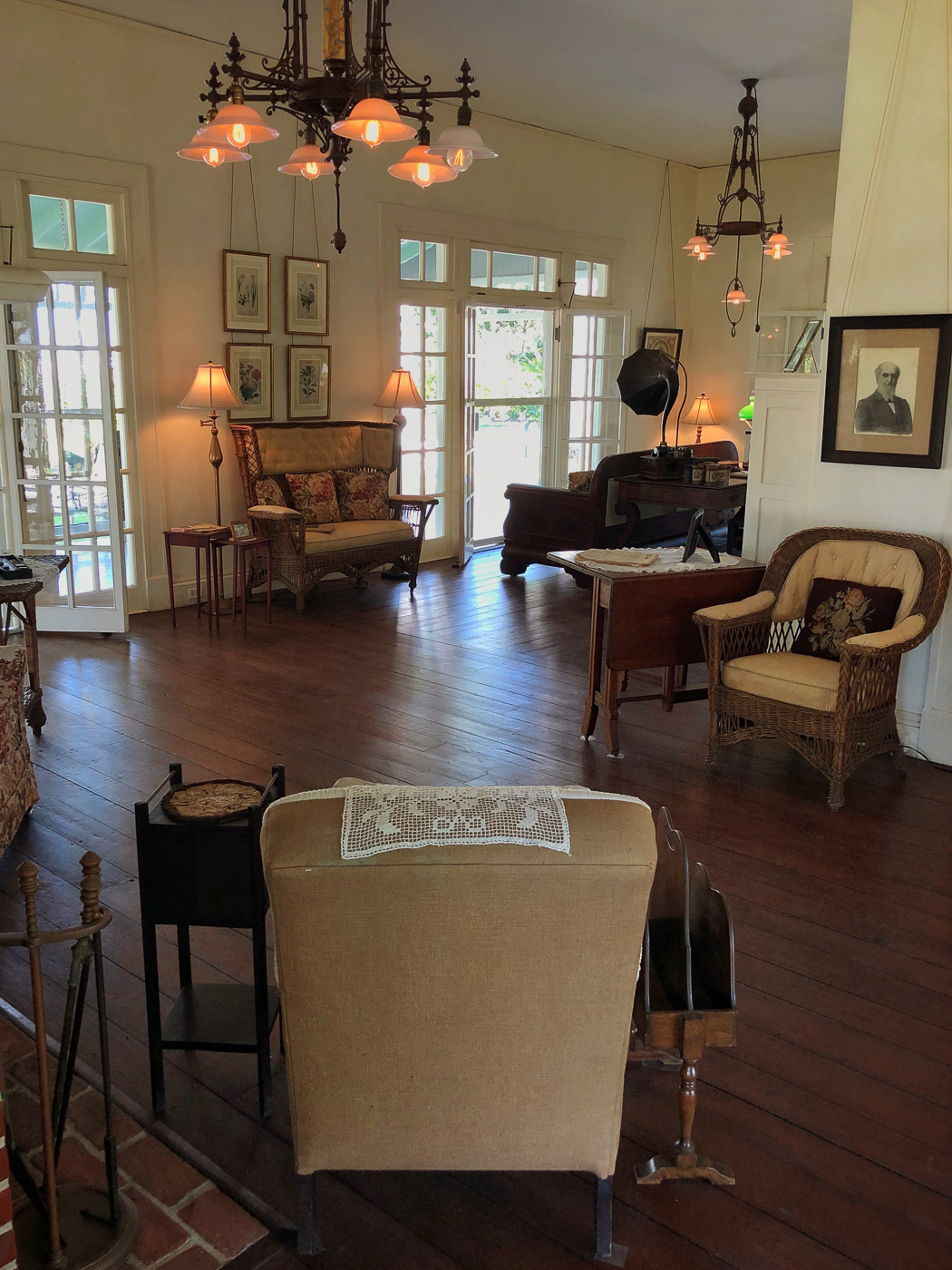 Thomas Edison and Mina had several guests visiting their home in Fort Myers so when they re-acquired the Gilliland home in 1906, they decided to use it as a guest house. Having a separate home for guests, provided more privacy for Thomas and Mina.

Some of the Edison's famous guests included Henry Ford, Harvey Firestone, President-elect Herbert Hoover, and the Colgate and Kellogg families.

After the 1910 remodelling of the main house, the dining room and kitchen we relocated to the guest house. 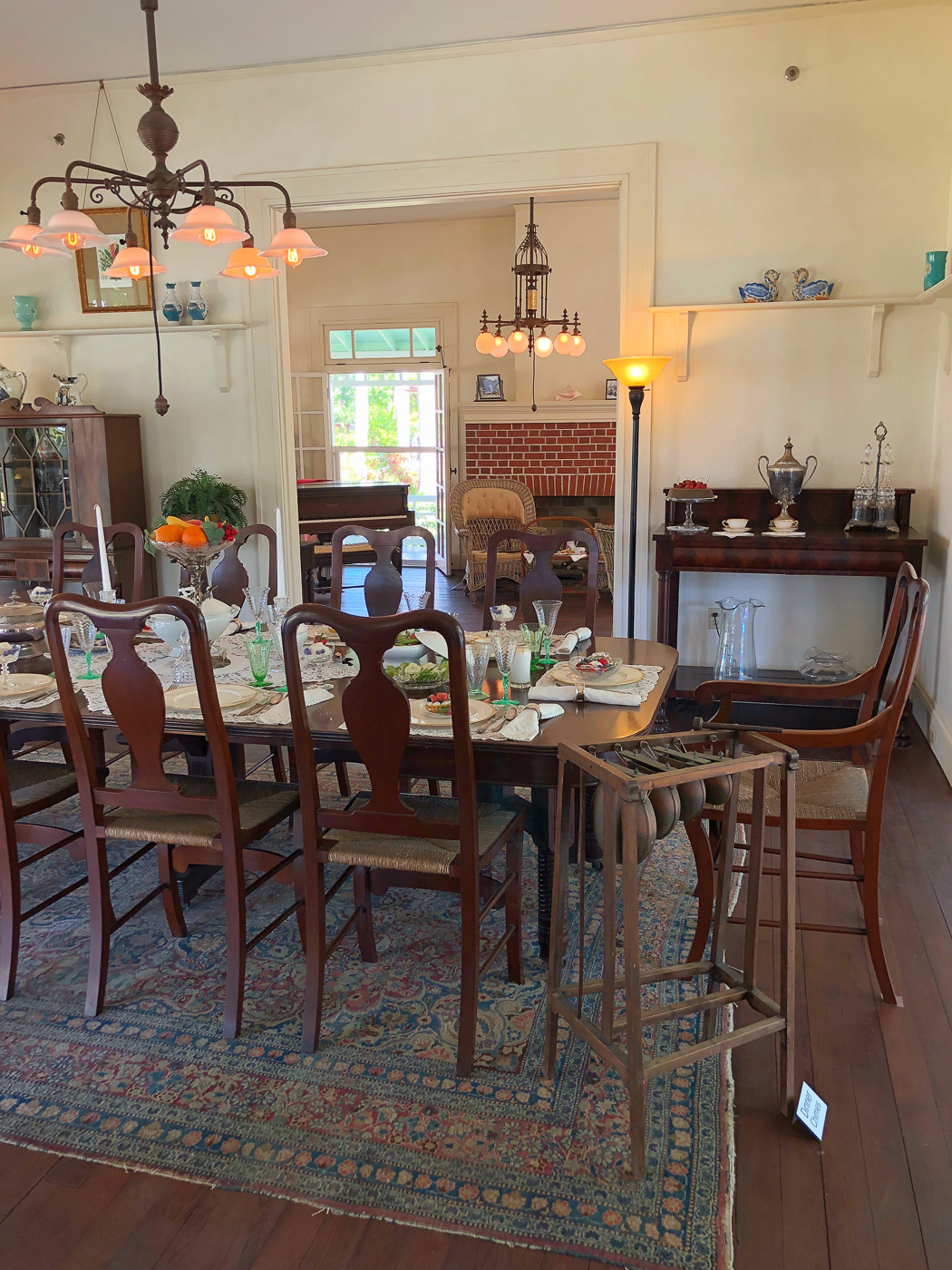 An interesting note regarding the dining room table, Edison installed a buzzer under the table where he sat.  Unfortunately, I do not remember what our guide told us about the buzzer.

If you decided to visit the Edison and Ford Winter Estates, be sure to ask your guide about this interesting feature. 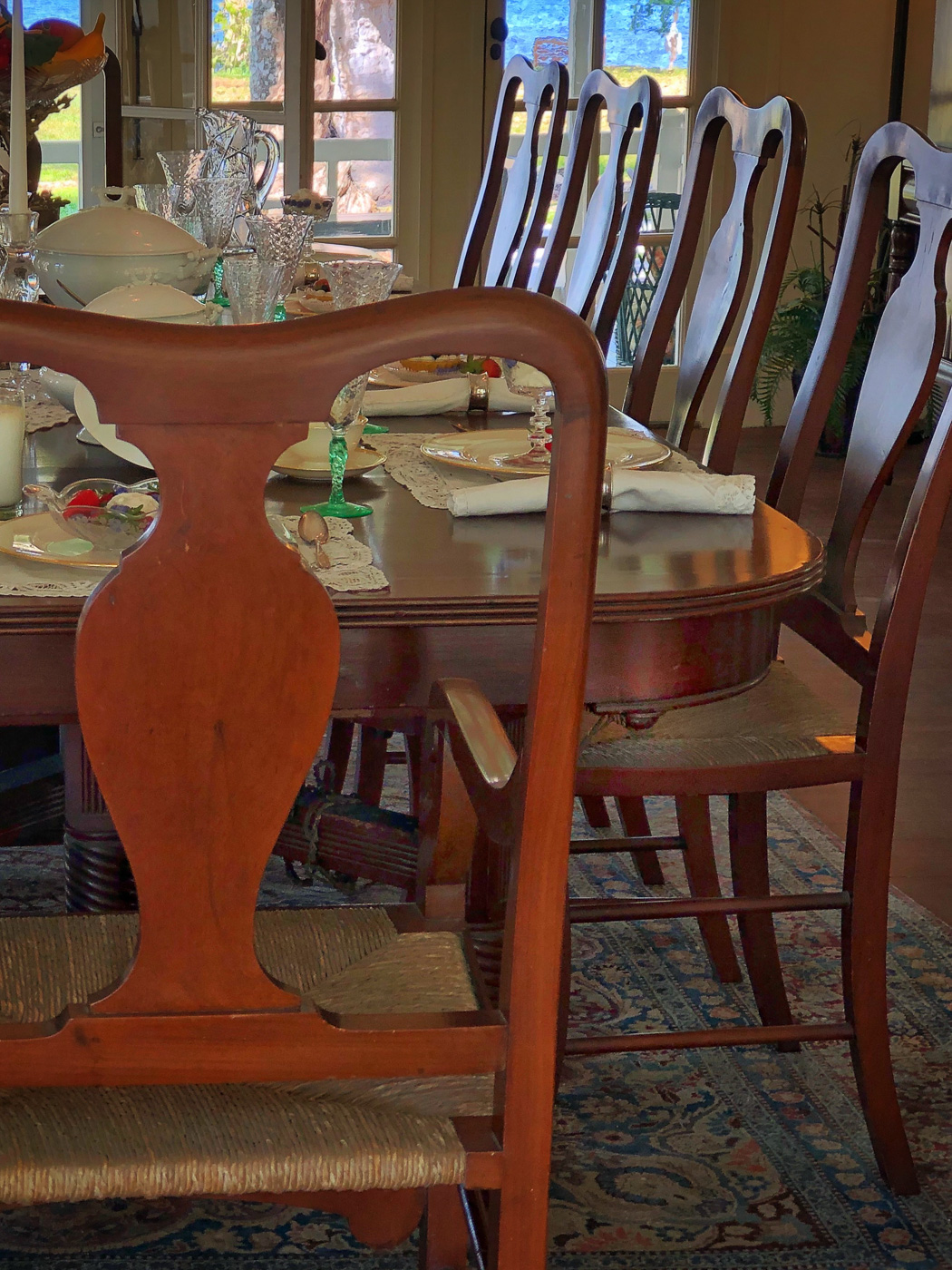 “Queen Adams served as the Edison family cook from 1926 until her death in January of 1937.  Although she was from Florida, Adams often travelled with the Edison family to New Jersey to assist with the cooking duties at their main residence.  With a keen sense of humor and a cheerful demeanour, Queenie was noted for her fried chicken, homemade ice cream and coconut cake, which she lovingly called 'Sunshine Cake.'  The January 18, 1937 edition of the Newark Star-Eagle remarked on her loss, commenting that she 'was as much a wizard in the kitchen as her late employer was in the laboratory.'" 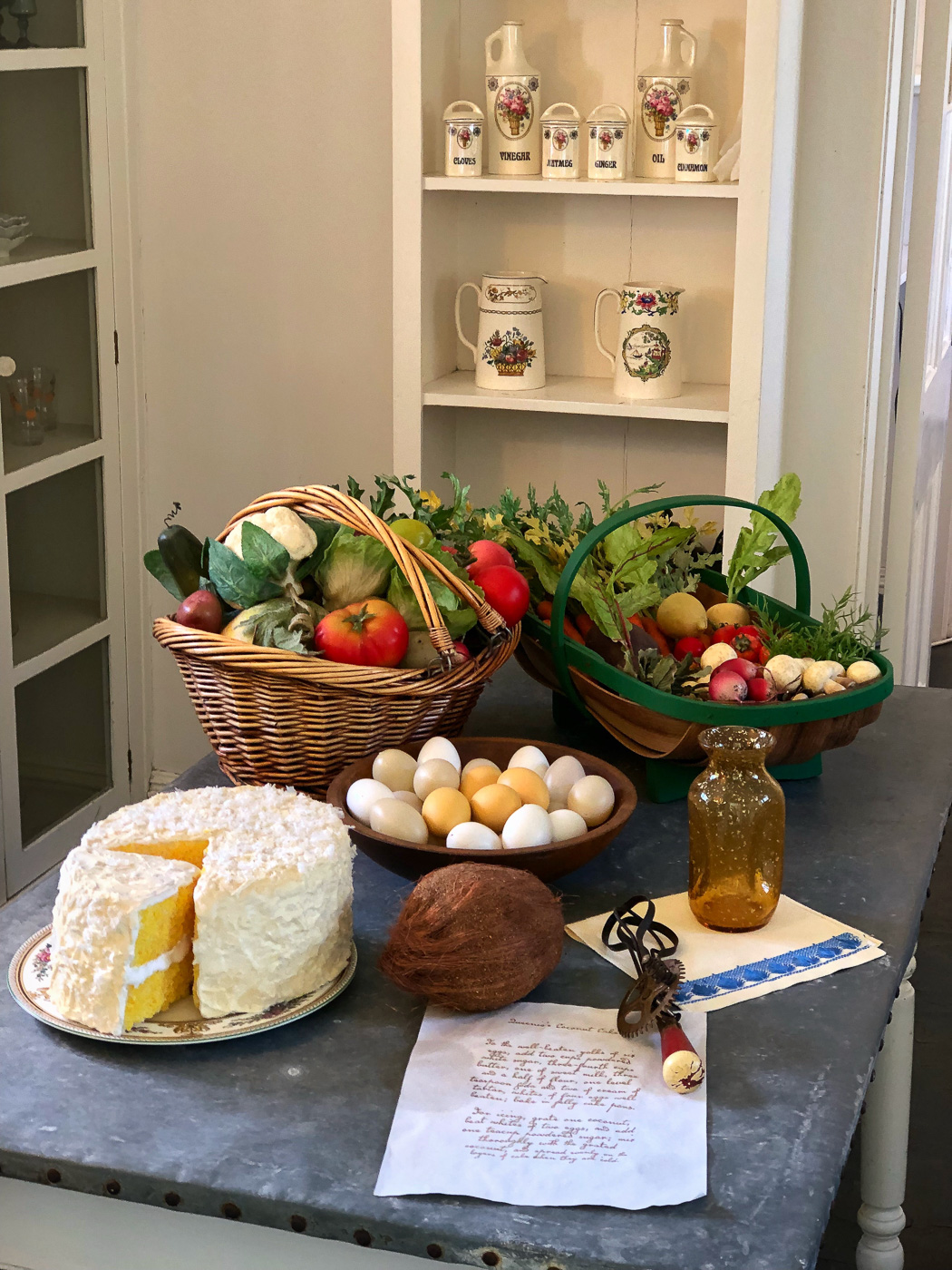 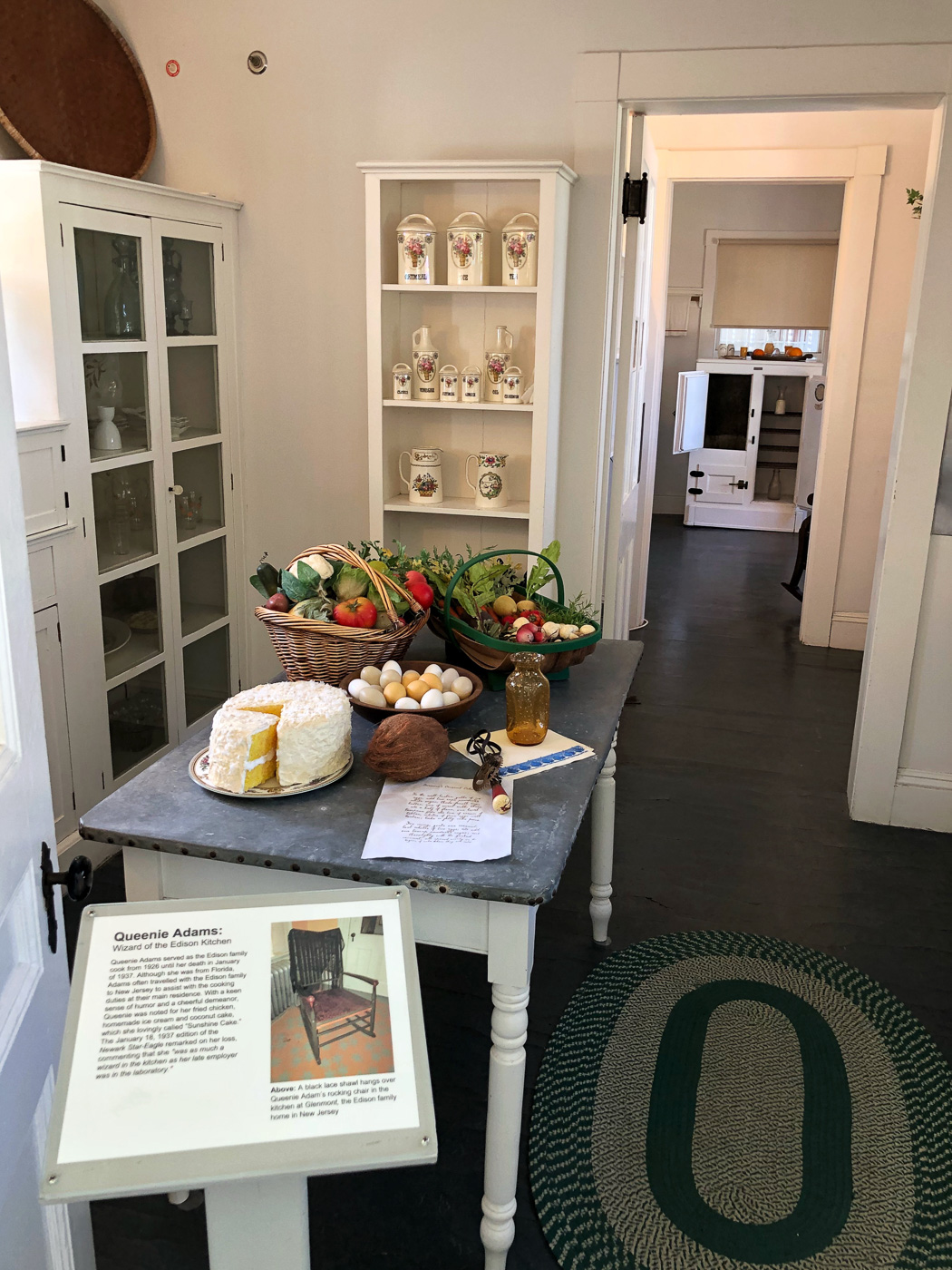 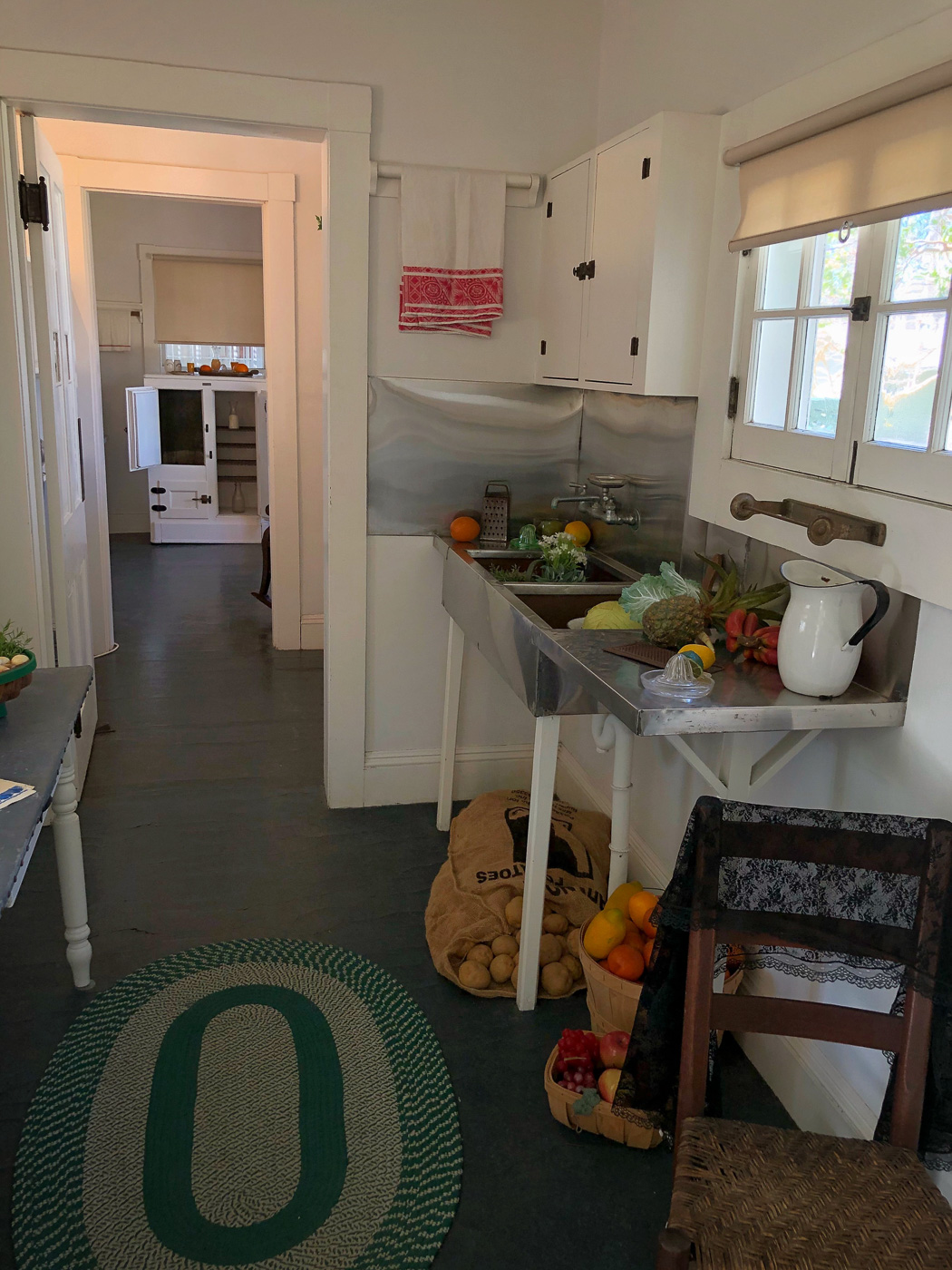 There are so many interesting things to see and learn at the Edison and Ford Winter Estates.  Far too much to cover in one article.

Therefore, in Part Two, we will carry on with our tour covering details about Henry Ford's estate 'The Mangoes', the Edison Ford Museum and the Edison Botanical Research Laboratory.

Do you know why Fort Myers is known as the City of Palms?

"Riverside Avenue (today known as McGregor Boulevard) was the first main road connecting Fort Myers to Punta Rassa, a nearby port.  In 1907, Thomas Edison proposed to the city that he plant Royal Palm trees along Riverside Avenue from his home all the way into town.  Eventually, the city lined the road with additional trees.  As you drive down historic McGregor Boulevard, enjoy the many miles of Royal Palm trees that are maintained by Fort Myers, known as The City of Palms."