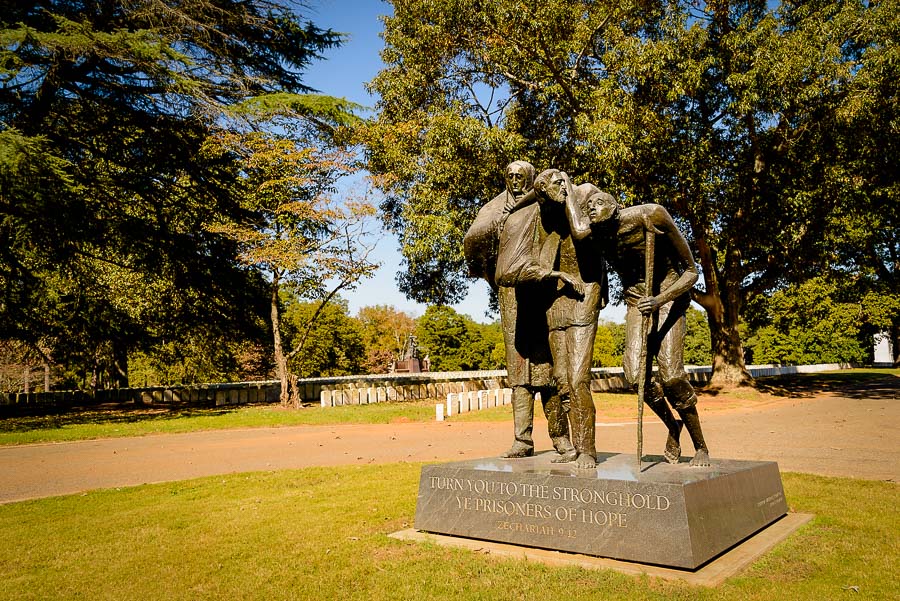 Two years ago, Jim and I watched the Ken Burns documentary film entitled “The Civil War” and when we had finished watching all the episodes, we talked about visiting some of the American Civil War sites one day – one of them being the Andersonville Prison in Georgia.  This October we did just that.

We arrived at the cemetery around 8:00 a.m. as the sun was still low in the sky and we took a few shots while we waited for the Visitors Centre at the National Prisoner of War Museum to open at 9:00 a.m. 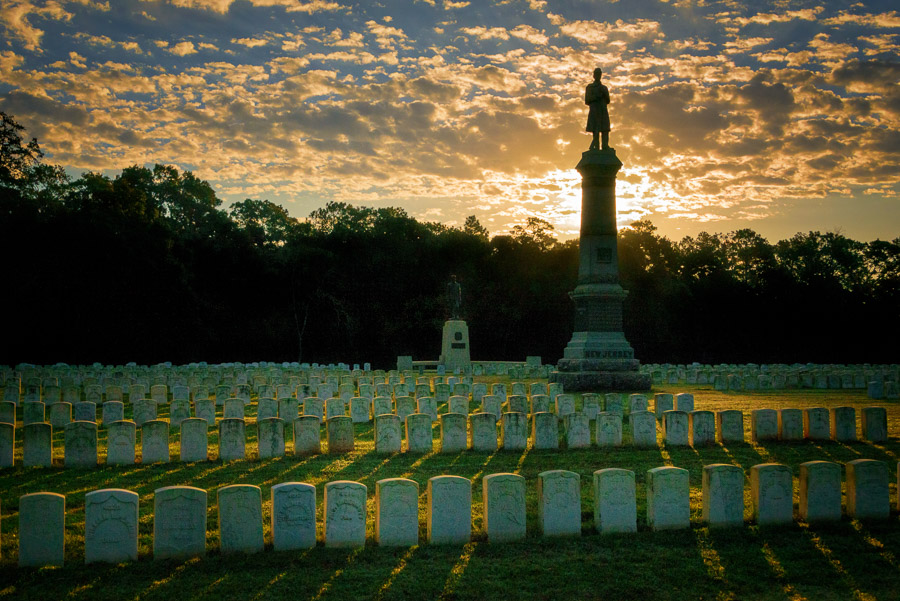 Once the Visitors Centre was open, we headed off to visit the prison site along with the National Prisoner of War Museum.   Before heading back to our hotel for the evening, we stopped by one more time to the cemetery to do a little more research and take a few more photographs.

The cemetery is quite large and beautiful.  The grounds are immaculate and there are 12 impressive monuments throughout.  As you first enter the cemetery at the south entrance, you are greeted by the Georgia Monument.  This monument was dedicated in 1976 and serves as a memorial to all American prisoners of war.  According to the National Park Service, this monument is probably the most recognizable icon of the Andersonville National Historic Site.  A photo of the Georgia Monument is at the opening of this blog.

It was the State of New Jersey that erected the first monument in commemoration of the sacrifices of the soldiers from that state.  It was dedicated in 1899.  A photo of the New Jersey Monument is just above.

The New York Monument was dedicated in 1914 and most visitors are not aware that the monument has an image sculpted on the back of the memorial.  Jim and I did not notice this when we photographed the monument.  I read about it afterward.  “The image on the reverse depicts two Andersonville prisoners.  One is seen as dejected while the other appears hopeful.  An angel approaches the prisoners carrying an olive branch, the symbol of peace, which was used to represent the reconciliation between the North and the South.” 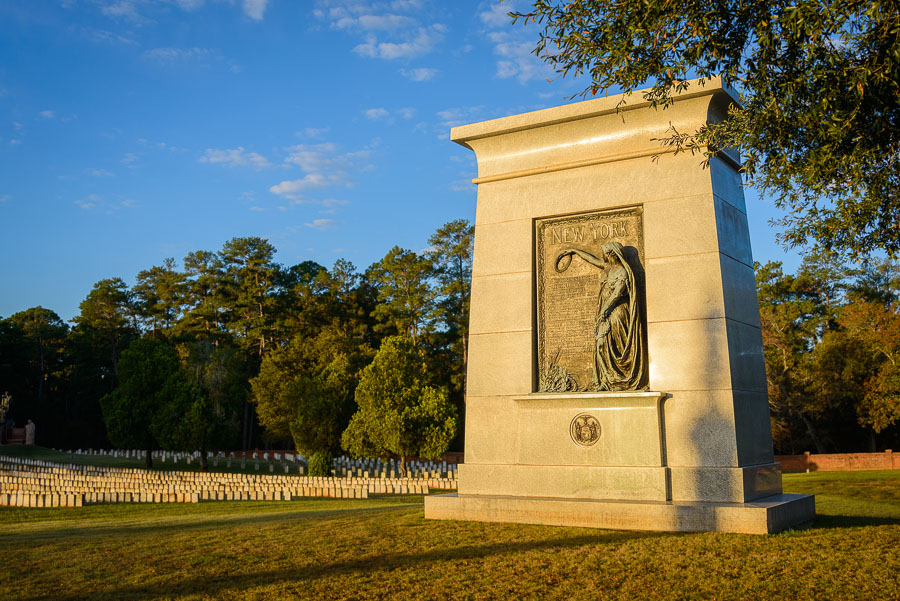 You will also find the following monuments throughout the cemetery:

The following two photos are of the Iowa Monument and the Illinois Monument. 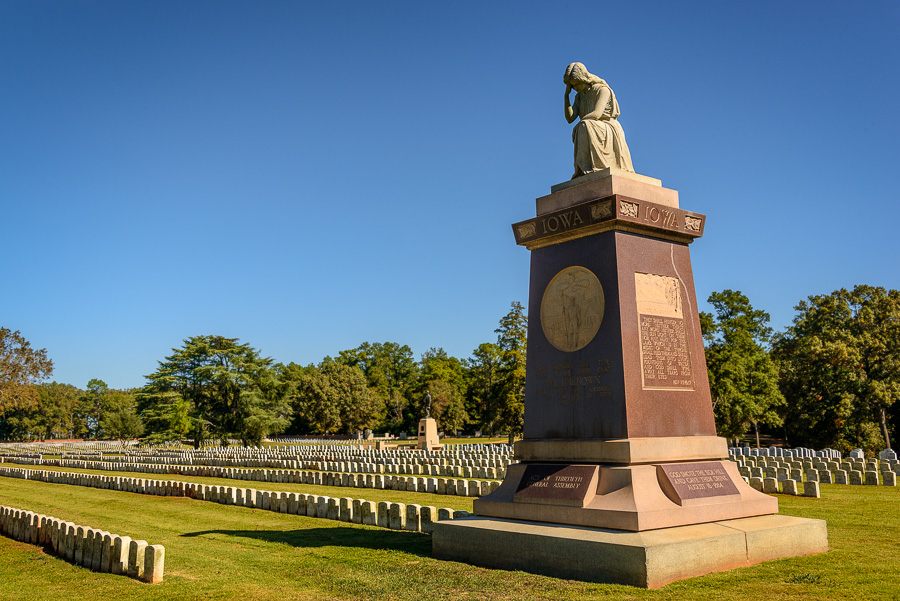 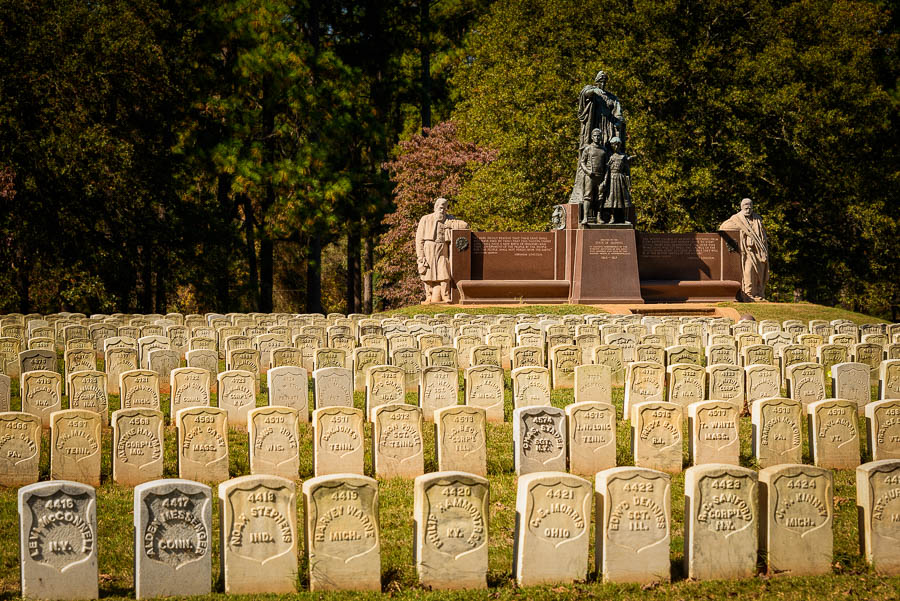 As you continue your way through the National Cemetery you will come across rows and rows of marble headstones only inches apart.  These headstones belong to Union Prisoners.  The remaining headstones that are placed further apart, represent more recent wars. 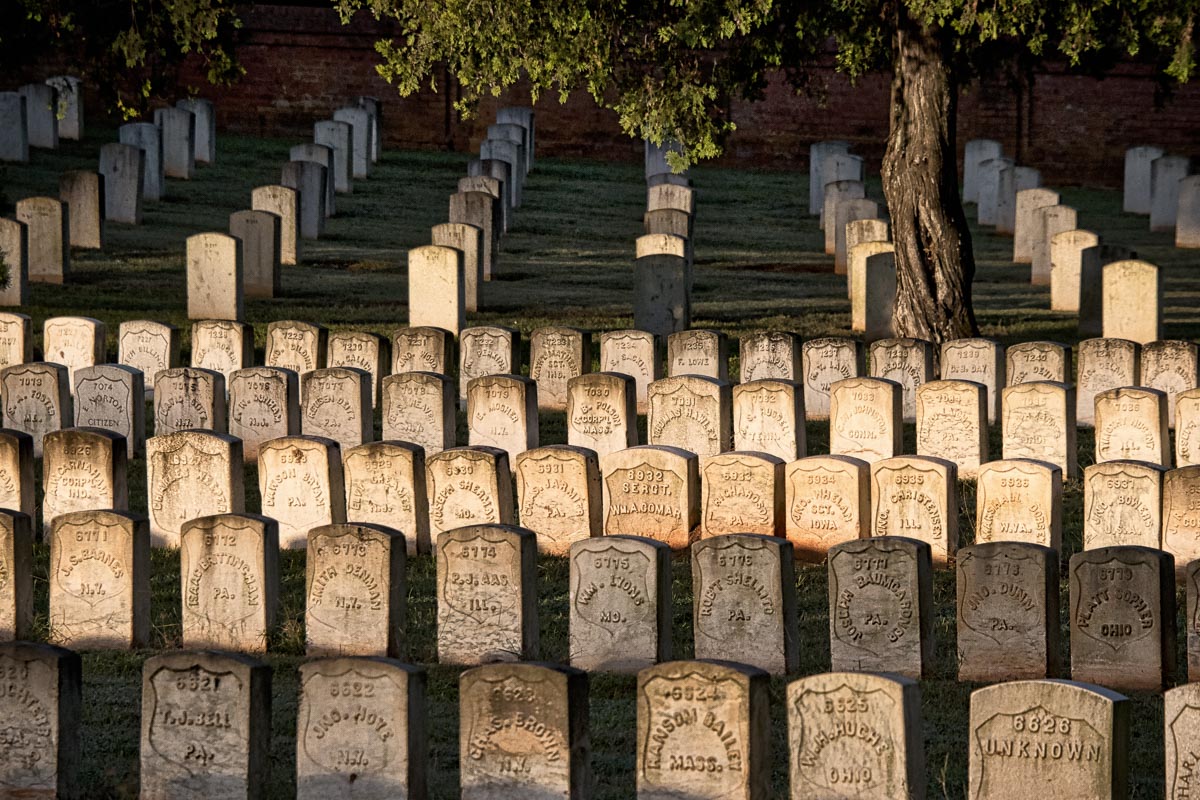 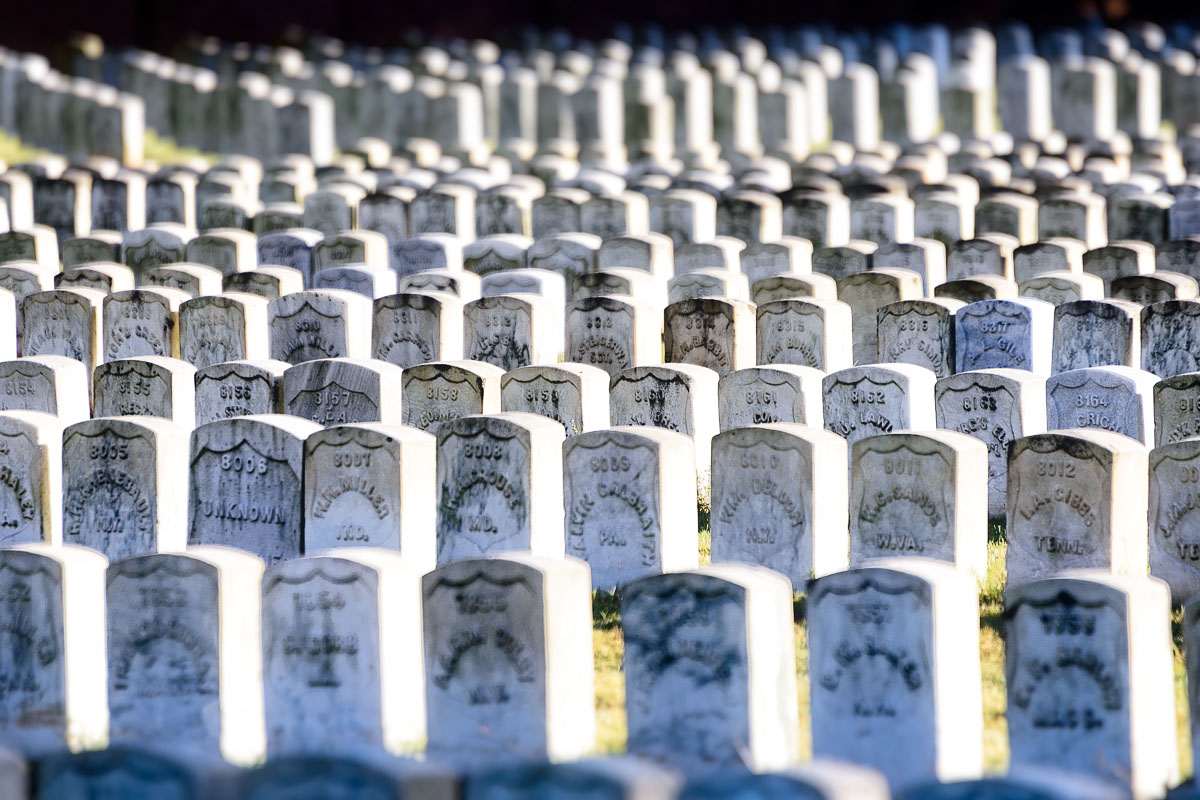 The cemetery is divided into different sections.  The 12,920 Union prisoners who died at Andersonville Prison, are buried in sections E, F, H, J and K and by 1868 an additional 800 soldiers relating to the Civil War were buried and they are in sections B and C.  These 800 Union soldiers died in hospitals, other prisoner of war camps, and on the battlefields of central and southwest Georgia.  The remaining sections are for veterans of all later wars.  Since its founding, the cemetery has been used continuously and currently averages over 150 burials a year.

In Section J there are six headstones that are deliberately set apart from the others.  These headstones belong to six prisoners who were buried with dishonour.  A court martial found these six men guilty of crimes punishable by hanging.

These individuals were part of a group of criminals referred to as “Raiders”.  The Raiders worked as individuals or as a group and their crimes ranged from petty thief to assault.  In some cases, they sometimes beat or killed other prisoners for their possessions.  The Raiders became very brazen and even attacked in daylight.

During the final weeks of June 1864, an organized group approached Confederate authorities and asked to be able to set up some kind of police force to enforce laws within the prison.  This group was referred to as “The Regulators”.  On June 29th and July 1st, with the permission of Gen. John Winder, the Regulators hunted and arrested accused Raiders.  The proceeding court-martial took place over the first several days of July. 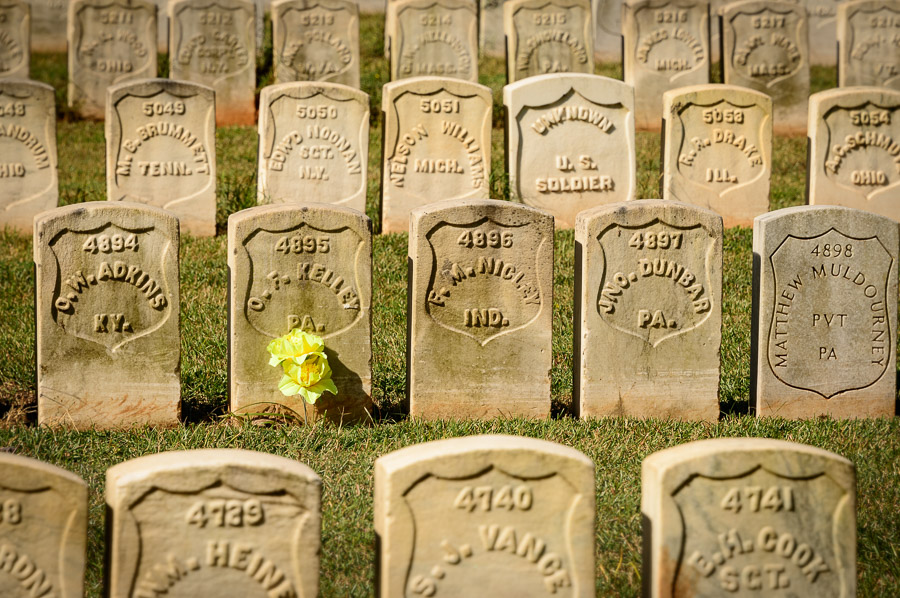 As you walk throughout the cemetery, you will find several signs which explain the history of the cemetery and interesting footnotes.  It is hard not to be moved when you visit.

The Andersonville National Cemetery was established on July 26, 1865 to provide a permanent place of honour for those who died in military service to the United States.  The initial interments began in February 1864 when the first soldier to die at Andersonville prison was Adam Swarner.  Five months later, his brother Jacob died and was buried in grave number 4,005. 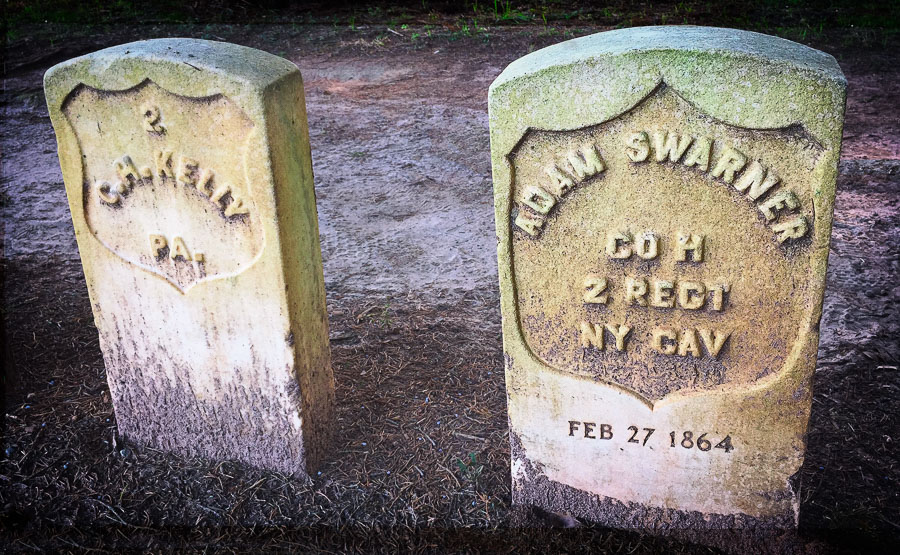 The cemetery was situated a short distance from the prison and this is where the Union soldiers who died at the prison were buried.  As the death rate at the prison escalated to 100 per day, officials abandoned the use of pine box coffins and had the bodies buried shoulder to shoulder in trenches.  There were no headstones placed above the bodies.  They were marked by a numbered post or board.

Thanks to the efforts of Dorence Atwater, there was a complete list of the death records.  Dorence Atwater had been a prisoner at the Andersonville prison and was paroled on the 15th of June, 1864.  He was then given the task of keeping the “Death List” and in August 1864, Dorence began to secretly copy the entire list of the dead.  He feared that the original list would not reach the Federal government.  In March 1865, he brought his secret list with him through the lines.

Dorence Atwater and Clara Barton wanted to make sure that family and friends would be able to find out where their loved ones were buried.  When Clara Barton heard about the condition of the cemetery at Andersonville and that the graves could be identified, she reported these facts to the Secretary of War and he ordered the necessary arrangements to be made for the marking of the graves.  Thanks to Atwater’s list they would be able to match his list with the numbered stakes.

A party was charged with this duty and an expedition left Washington on the 8th of July, 1865 consisting of Miss Clara Barton, Capt. J. M. Moore, Dorence Atwater and forty-two letterers, painters and clerks.  They arrived at Andersonville on the 25th of July, 1865.  The job of the expedition was to enclose the cemetery grounds, identify and mark the graves, place some appropriate mottoes at the gates and along the spaces designed for walks; and, to erect a flagstaff at the centre of the cemetery.  The work was completed on the 17th of August and Clara Barton was given the honour of raising the Stars and Stripes for the first time.  The headstones were originally wooden but in 1878 there were replaced by marble.

In the publication entitled “A List of the Union Soldiers Buried at Andersonville” published in 1866 it says that all headstones relating to the Civil War numbered below 12,367, died in 1864; above that number in 1865.  A copy of this list is available online.  I downloaded a PDF and it a very interesting read.  You can view the book in several formats.

Although many of the headstones are marked with soldiers’ names, there are many marked “Unknown U. S. Soldier”.  As a matter of fact, in one grave number 13,718 two unknown Union soldiers are buried together.  “These prisoners deaths were discovered in 1899 when heavy rains exposed their remains within the prison site.  It is thought that they died as a result of suffocation from a cave-in or a shelter or well.”

During the Civil War, there was no formal identification system in place such as dog tags and this made it difficult to identify some of the soldiers.  There is an interesting page on the U.S. National Park website entitled “The Story of the Headstones” that talks about the difficulties of identifying individuals and the work to make corrections where necessary. 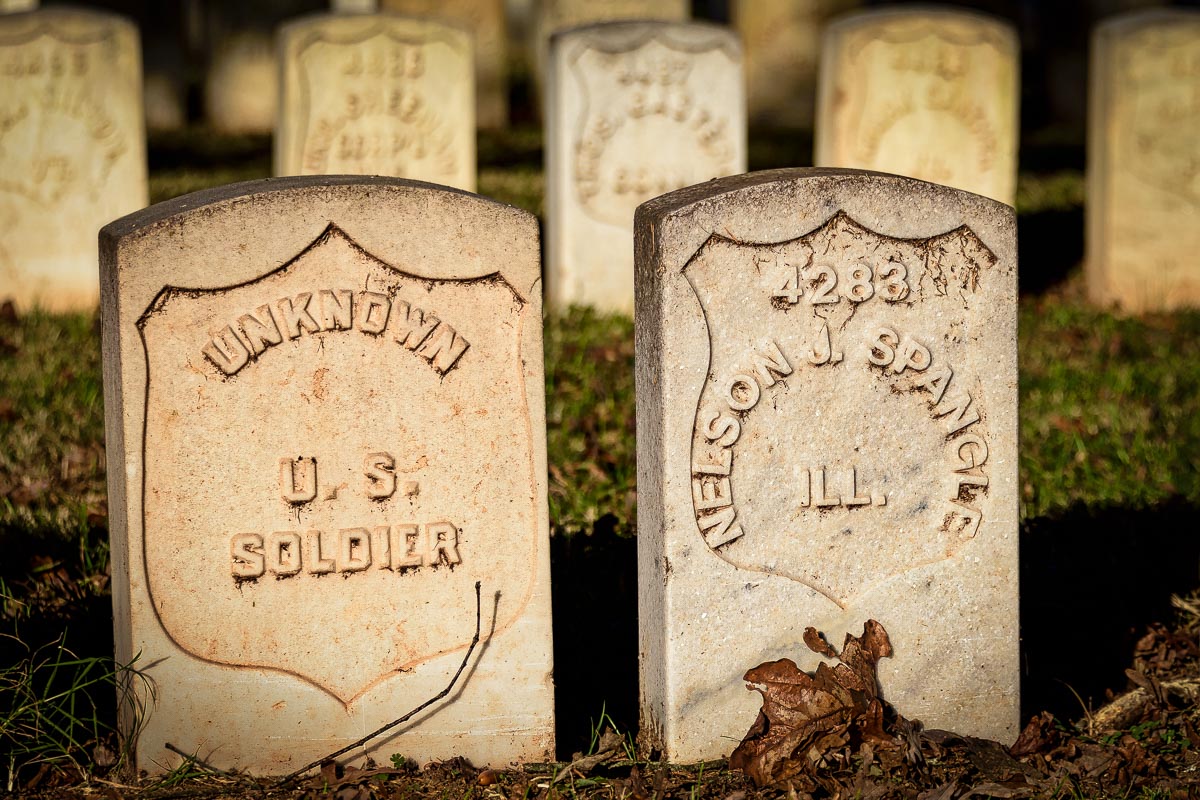 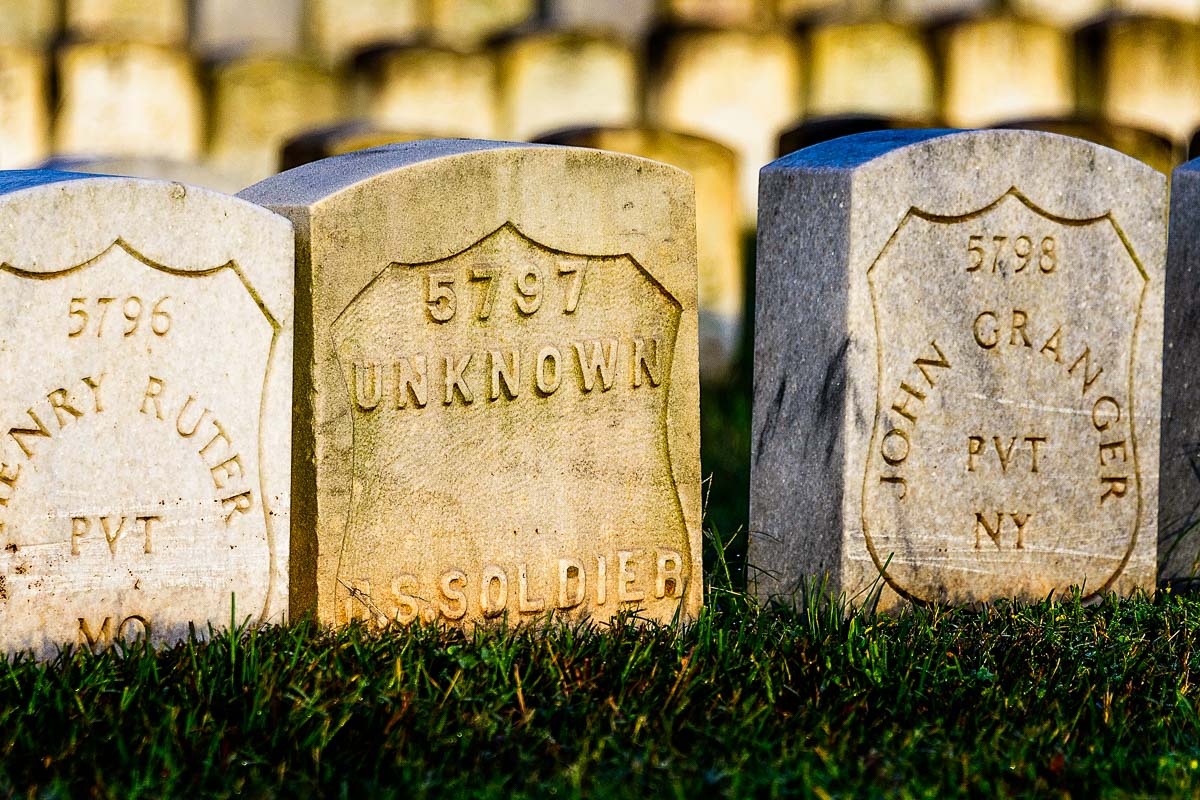