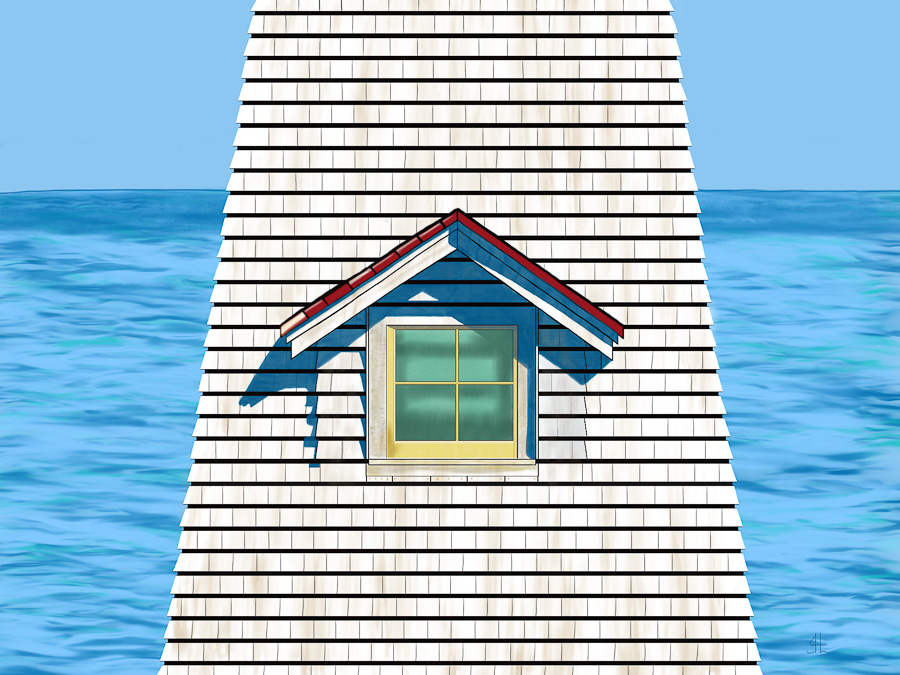 There is something very special about lighthouses.  I have felt this way for quite a long time but I have never really sat down and given it any thought until recently.

Since Jim and I retired and moved back to Nova Scotia, I have been surrounded by lighthouses and works of art depicting lighthouses.  Perhaps that is why they have been on my mind for the last few years.  I have been impressed by the works of Laura Kenney and Steven Rhude who have created many beautiful works of art around the subject of lighthouses.  As well as, Lyndia Baird-Wellwood, a painter who has done several solo shows around her love for Lighthouses.

As I have been writing about my recent drawing of Boars Head Lighthouse, I have taken some time to try and figure out why lighthouses are so interesting to me.  Perhaps this stems back to one of my school field trips to the Island Natural Science School on Centre Island in Toronto, Ontario.

Our class spent several days there where we were taught to have an appreciation for nature and we were also taught about surveying, bees and nature in general. I remember one night, as we all sat around an outdoor fire enjoying hot chocolate and roasted marshmallows, one of the instructors told us about the ghost that supposedly resides in the island’s lighthouse.  He was a great storyteller and we were a little nervous that we might actually see the ghost.  None of us did, but the memory is still there.  That field trip was one of the most interesting and educational field trips that I ever attended - next to the McMichael Canadian Art Collection, but that is a story for another day.

As a young girl, I was also influenced by stories of the sea such as the TV series entitled “The Ghost and Mrs. Muir”.  It is hard to say with certainty, but something has definitely left me with an appreciation for lighthouses.

This recent drawing is from one of my photographs from a trip I took to Long Island in 2011.  As I was crossing over on the ferry between Digby Neck and Tiverton, I noticed a Lighthouse high on the cliffs of Long Island.  When I drove off of the ferry, I took the road to the right, until I came to a gate.  I parked the car, grabbed my camera and walked up the hill until I reached the lighthouse.  I arrived well before noon and the light was quite beautiful on this beacon of light.  I spent a great deal of time photographing the lighthouse from various angles, not wanting to miss out on any interesting shots.  I was fascinated with the window and I could hardly wait to process my images.  I had a lot of fun that day.

This drawing of the lighthouse and its window, took me 35 days to complete at roughly one hour per day. This image was drawn on my iPad using the App “Procreate”.  The horizontal lines are the reason that it took so long compared to my earlier drawings.  In order to draw straight lines, I had to go down to individual pixels to be sure that they were exact.  I could have drawn them loosely but I did not want that look.  When I draw on my iPad, I try to draw as realistically as possible in order to build on my drawing skills.  I enjoyed working on this image and I am pleased with the results.  With each drawing, I learn something new.

Note:  Since this article was first posted,  Procreate has now made it easier to draw straight lines.